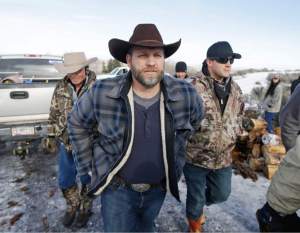 Jury selection is was about to begin last week  in the trial of Ammon Bundy (Son of Cliven, no relation to Ted) and his fellow defendants who led an armed stand-off on federal lands in Oregon.  First, however, the judge in the case had to rule on Bundy’s lawyer’s motion demanding that the defendants, who are in custody, can wear neckties, belts and boots at trial as requested.

The U.S. Marshal’s Service  emailed  Bundy and the rest to alert them that certain  items of apparel wouldn’t be permitted at their trial: “Ties, Bows, Belts, Handkerchiefs, Cuff Links, Steel toe boots/shoes, Shoe laces, Shirt tie down straps, Safety pins, Shirt pocket pen protectors.” When U.S. District Judge Anna J. Brown Tuesday afternoon asked Barbara Alfono, the deputy U.S marshal in charge of the Bundy trial, about the requirement, she explained that security concerns were the source of the order. Those accessories could be used as weapons against deputy marshals or the defendants themselves, she said. As for the boots, they would interfere with the shackles that are placed around the defendants ankles as they are transported to and from the courthouse. (The shackles will be removed, because prior courts have ruled that they are prejudicial, making defendants look dangerous to the jury.)

J. Morgan Philpot,  Ammon Bundy’s marvelously named lawyer, argued that since his client is innocent until proven guilty, he should be allowed to wear the civilian clothes that he chooses.  “These men are cowboys,” Philpot wrote  in his motion, “and given that the jury will be assessing their authenticity and credibility, they should be able to present themselves to the jury in that manner.” He continued:

“We must consider, when he does so, how will he look? And what are the spot assumptions and impressions will the jury have about him when they see him in the kind of white socks and loafers he was wearing today, with his beltless trousers, and dressed in a formal suit without a tie,Just as significantly, how will the lack of belt, tie, or other apparel compare to others in the courtroom, as he and the other detained defendants are the only ones who will appear that way.”

The judge ruled against him.

Is it ethical for the system to prevent accused cowboys from looking like cowboys during their trial?

I’m pretty sure what’s going on here. There are other posts on Ethics Alarms about defense attorneys crafting their clients’ appearances to appeal to jurors’ favorable biases rather than their negative ones. Criminal Defense 101 demands that if your defendant naturally looks like Charles Manson, you do everything short of plastic surgery to make him look like Saint Francis of Assisi. In the so-called “nerd defense,” lawyer place their unsavory defendants in glasses to make them look less menacing and more academic, and it appears to work.

Judges usually bend over backwards to allow this, because their main job is to avoid unfair prejudice that nick the defendant’s rights to a fair trial, not try to decide if, for example, an accused killer shaved off his scraggly beard because it makes him look uncharacteristically harmless to the jury, or because it was just getting itchy. Lawyers have even argued that a defendant’s own tattoos can be so prejudicial that the court has to let him cover them up, like in this case, this one, and this one.

There isn’t much precedent on this question, though: Can the system legitimately constrain the attire choices of defendants who come to court straight from jail? It’s obvious what Bundy’s attorney wants to accomplish. Despite his rhetoric regarding his client’s comfort with his appearance (his client just hates the mandatory slip-on loafers), this is really about playing to jury prejudices and cultural stereotypes. What if a defendant in a theft trial wants to dress like Robin Hood, or Santa Clause? The precedent the case threatens to set would be a bonanza for creative defense attorneys. In the United States’ culture, cowboys are the good guys. They settled the West; they shoot villains; they save the day. Cowboys are John Wayne, Roy Rogers, Hopalong Cassidy, the Cartwright boys, Gary Cooper in “High Noon” and Alan Ladd in “Shane.” Their Ethics Code looks like this: 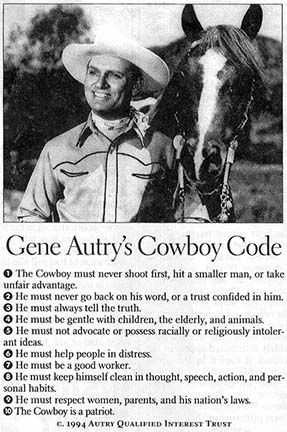 What defendant wouldn’t want to be dressed as a cowboy in his trial, whether he is a real cowboy or not?

The reasons for the dress code issued by the Deputy U.S. Marshall are also reasonable, if a bit alarmist. In a nod to that—imagine the fate of a judge who let a defendant wear a big, thick belt and he strangled the prosecutor with it in court—Philpott reduced his minimum request down to cowboy boots, which his client would get to don after his shackles are removed.  Naturally, Above the Law’s Joe Patrice (it is a usually reliable bet that the Above the Law staff will end up on the wrong side of any ethics question) believes that opposition to this was persecution, writing,

“The government’s position here boils down to, “for no specific safety reason, we should be able to dictate the defendants’ litigation strategy.”

No, Joe. It boils down to “a defendant’s appearance shouldn’t affect how the jury viscerally reacts to him, positively or negatively.” Whether Ammon Bundy is a cowboy or not has nothing to do with whether he’s guilty as charged.

Those boots are made for walking, not posturing in court.

Sources: Above the Law, Oregon Live