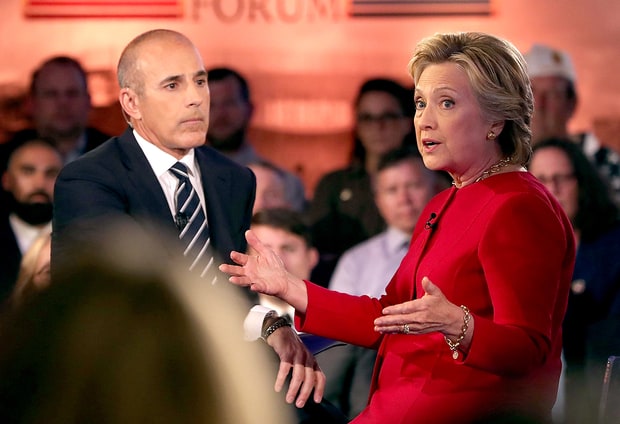 Once the New York Times embraced the rationalization “Ethics is a luxury we can’t afford” and announced that journalists had a duty to bias their reporting to block Donald Trump’s election, this result was foretold. It was really foretold in 2008, when the news media first abandoned even the pretense of fairness and objectivity to ensure the election of our first black President.

Matt Lauer, of all people, became the object of furious invective after he hosted a live prime-time forum with Trump and Hillary. He was accused of unfairness, gullibility and even sexism in his handling of the event. His main offenses: not “fact-checking” Trump, as when he said, not for the first time, that he opposed the Iraq invasion from the beginning (he didn’t), and grilling Hillary about her e-mail machinations.

The only way the transcript supports the latter contention is if one is Bernie Sanders and believes Hillary’s “stupid e-mail” is irrelevant. Lauer didn’t spend an inappropriate time on this issue, given what a perfect example it is of Clinton’s Arrogance, deviousness, lack of transparency, and, apparently, incompetence and recklessness.  I’d say he was easy on Hillary: he didn’t mention her sleazy conflicts with Clinton Foundation donors at all, and she is much less adept at spinning that slam-dunk conflict of interest and ethical violation than with her e-mail, which she has been lying about for more than a year. Pro-Clinton news media, which is to say, news media, howled about Lauer not challenging Trump’s thoroughly disproven claim about opposing the Iraq War, but Clinton already had done this, saying, “Now, my opponent was for the war in Iraq. He says he wasn’t. You can go back and look at the record. He supported it. He told Howard Stern he supported it.” Maybe Lauer thought that was enough; it should have been: Trump’s lie on this score has been well-publicized, including here, on Ethics Alarms.

Meanwhile, he did not challenge Clinton on her obviously false claim that emails cannot be considered classified if they do not contain formal classification markings, and worst of all, he did not challenge her unconstitutional call to ban citizens who are placed on a no-fly list from exercising their Second Amendment rights. This is especially important, because this fact isn’t understood by most Americans, and a Presidential candidate advocating defiance of the Constitution is, or should be, a big deal. Never mind, though: Lauer wasn’t supposed to be tough on Hillary. He was only supposed to be hard on Trump, and because he wasn’t “hard enough,” a.k.a., “harder,” a.k.a. “biased like the rest of the mainstream coverage,” then it means that he was incompetent.

This is especially ironic for Lauer, who allowed First Lady Hillary Clinton, then with complete knowledge that the allegations about Monica Lewinsky and her husband were true (meaning that he had lied under oath in court, to the press and to the American people), to claim that the entire scandal was the fantasy of a “vast right wing conspiracy,” as Matt nodded like a bobble-head. Given what we know to be his political leanings as he has displayed them on hundreds of interviews,Lauer’s performance last week was remarkably fair. He challenged both candidates. Lauer  called Trump on his dumb claim that he knew more about the Islamic State than the generals. He challenged Trump regarding his secret plan to defeat the Islamic State, and his assertion that we should have seized Iraqi oil.

That’s not good enough, though. The mainstream media strategy to save Hillary now is for the journalists to be united in criticizing Trump on everything he says, even the things he says that any idiot can tell he doesn’t mean literally (no, Trump does not really think that Obama and Hillary were the “founders” of ISIS), while simultaneously ignoring Clinton’s dishonesty, corruption, incompetence, lack of trustworthiness, and the apparent cover-up regarding her state of health. This means demonizing any journalist who dares to try to maintain those old-fashioned ethical values like neutrality and fairness, and attacking them so mercilessly that other journalists understand that not shilling for Hillary Clinton is a potential career-ender.

UPDATE: Speaking of her health<cough>,  I am reading right now that Clinton had to leave a 9-11 ceremony due to some kind of medical episode. At first, none of the mainstream media  (except Fox) reported it: huh, I wonder why? Then a few reported the Clinton campaign spin: No problem, Hillary just got a little over-heated, that’s all. No, of course she didn’t faint (though on-the-scene tweeters said she looked like she was close to it.) Then the videos came out, and now everyone is reporting it. Look:

Hillary Clinton falling ill Sunday morning at a memorial service on the 15th anniversary of the Sept. 11 attacks will catapult questions about her health from the ranks of conservative conspiracy theory to perhaps the central debate in the presidential race over the coming days….Coughing, I wrote, is simply not evidence enough of any sort of major illness that Clinton is assumed to be hiding. Neither, of course, is feeling “overheated.” But those two things happening within six days of each other to a candidate who is 68 years old makes talk of Clinton’s health no longer just the stuff of conspiracy theorists.

What an ass. So although events now support those who saw enough clues to believe Clinton and her campaign were not being candid or transparent about her health, those concerns still constituted a conspiracy theory. Can you say “I was dead wrong,” Chris? Sure you can.

Right up to today, any reporter who suggested that Hillary wasn’t as healthy as a horse—did you see her open that pickle jar on Jimmy Kimmel’s show?—has been condemned as a biased hack.

Example: Daily Mail U.S. Political Editor David Martosko opined in a series of tweets that Hillary Clinton seemed tired and listless at her  press conference about national security last week. Nick Merrill, Clinton’s traveling press secretary, and Adam Parkhomenko, who was a state coordinator for the Clinton campaign and is now National Field Director for the Democratic Party, attacked him for it.

“Is it just me or does Hillary Clinton sound absolutely exhausted and quiet? Seems like an illustration of Trump’s whole “tired” critique” tweeted Martosko, who was watching the press conference on TV. “She sounds bored / half-awake / disinterested … not the kind of performance that inspires fear in our enemies. Where’s the caffeine?…I half expect her to slump over and collapse any second now. if she were doing a parody of “low energy” Jeb!, it couldn’t be more spot-on.”

Ginger Gibson, pro-Hillary Politico reporter, was shocked, tweeting back, “This isn’t a serious tweet, right? You are trying to mock people who talk about her tone, right?” Merrill replied to Martosko, who has been tough on both Trump and Hillary, with a more aggressive  “delete your account.”

Next, Parkhomenko threatened “You shouldn’t have a job in the morning.”

The news media and Democrats are clearly determined to bully what few objective journalists there are left into either helping them make Hillary President, or keeping quiet.

And the truth has no effect on them whatsoever.