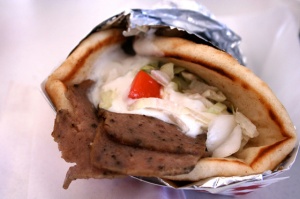 Now THIS is a gyros sandwich!

The little restaurant opened the same year my wife and I moved into the neighborhood. It specialized in yummy Greek fare like gyros, souvlaki, and Greek salads, but also made terrific hamburgers, subs and pizzas, and quickly became our reflex fall-back when we were too tired to make dinner or wanted a treat for lunch. The place was a family operation: the tiny, spunky middle aged woman who seemed to run the place—taking the orders, filling bags, taking the payment—had a Greek accent that reminded me of my grandmother and all of my relatives from her generation; her husband, silent, imposing, who was the chef; and over time, the two children, both of whom worked there when they weren’t in school.

The food was consistently delicious, fresh and authentic, but it was also satisfying to see an old-fashioned family business growing and thriving. A restaurant consultant would probably have said it was too old-fashioned, for the menu never changed, the faded prints of the Parthenon and the Aegean coast were the only decorations in the place, and it dealt only in cash. Still, the little Greek lady greeted you with a knowing smile when you walked in the door, and you knew you were going to be treated like a neighbor.

Then suddenly, the family was gone. The couple decided to sell the place and retire, and a long-time employee who had worked in various jobs over the years took the restaurant over. I knew him, of course, and we talked often. He’s a nice guy, determined, ambitious, hard working. He threw himself into the job of making the business boom. Now the restaurant accepts credit cards and delivers, is open on Sundays, has daily specials, and sports a newly-painted and (somewhat) less austere decor. He also jacked up the price on everything.

The new owner’s formula for success worked almost immediately. The restaurant, he told me, has almost doubled its business. The problem is, as my family gradually discovered, is that the entirely non-Greek staff, including the owner,  has no idea what their food is supposed to taste like. You know you’re in trouble when the entire staff mispronounces everything on the menu, (It’s GIR -Os, hard G, not, ugh, “JY-row,” like the name of the goose inventor in Donald Duck comics), but it’s worse than that. The feta cheese in the Greek salads, which are suddenly mostly iceberg lettuce, is scant and low quality. The once-marvelous cheese steak subs are bland; the onion rings are charred, and every now and then a carry-out order includes something inedible, like the freezer-burned veal parmigiana I had a few months ago. The owner was apologetic, but his candid “I thought that meat looked funny when I microwaved it” didn’t inspire confidence.

After several months of disappointing experiences with our old standby, my wife and I resolved that the next bad meal there would be our last. It arrived  soon thereafter, when a so-called gyro sandwich came covered in  ton of shredded lettuce without onions or  the mandatory sauce. The young woman who was running the kitchen that night argued with my wife about what the order was supposed to include, saying “That’s the way we always make a  “jy-row,” causing my wife to correctly note that NOBODY makes gyros buried in lettuce and with no sauce.

“Well, maybe you should kind another restaurant then!” she said, the snot.

Bingo. We haven’t been back since, and I have been wrestling for weeks over the question of whether I should tell the owner 1) that his food is really bad and unreliable, 2) that these two long-time customers won’t be coming back, and 3), even if the fare was the best Greek food on the East Coast, I wouldn’t set foot in his restaurant  again until the woman who argued with us was taking unemployment checks.

The Golden Rule dictates that I talk to him. I would want a good and loyal patron to tell me if my business’s quality was declining. Still, he’s clueless. If he was capable of making the food better that now was, he wouldn’t have let it get this bad to begin with. And why would he listen to me? He’s getting more business than the old place ever got. People will pay for crap, and most customers can’t tell an authentic gyro from souvlaki. I’m just going to upset the guy, and he’ll dismiss me as a crackpot.  Yes, he should know about the young woman’s miserable manner, but how can he not know now? Ultimately, it seems likely that confronting him will be a futile gesture, and I know it will be an unpleasant one.

Or am I letting the latter factor dissuade me from my duty as a member of the community? Surely the restaurant can’t continue to thrive as its product declines, can it? As I review the reasons for not telling the owner the truth, they are all rationalizations, with one major peice of selfish reality: I do NOT want to eat any food from there again. I don’t trust the staff or even him., and I can’t have that conversation without agreeing to give the restaurant a second chance.

What would you do?

55 thoughts on “The Ethical Dilemma Of The Successful, Failing, Local Small Business”