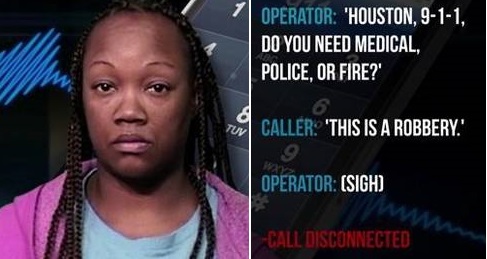 After reading about Crenshanda Williams, I’ve been pondering what would constitute a worse match of temperament, attitude, competence and basic job responsibilities. It will be hard to top her. A Houston 911 call center operator, Crenshanda is now under arrest, but not before she hung up on thousands of emergency callers mid emergency.

On one call, she hung up on the caller mid-sentence, saying, “Ain’t nobody got time for this. For real.”  That occurred  as a driver attempted to report trucks racing on the highway. The citizen identified himself when Williams picked up his call and began telling her, “I’m driving 45 South right now and right now, I am at …”

Then there was the man who dialed 911 to report that he had just left an armed robbery in progress. Williams immediately hung up on his first call. When he called again a minute later, she answered: “Houston 911, do you need medical, police or fire?”

“This is a robbery!” the man  responded. Williams sighed, and hung up on him again.

The 43-year-old’s call record was  reviewed after her supervisors noticed that she had a large number of calls that lasted less than 20 seconds, and a check of  the Houston Emergency Center database found that “thousands of short calls have been attributed to the defendant” from October 2015 to March 2016.

Williams explained to officers she often hung up because she didn’t feel like speaking with anybody at the time.  Well, that’s certainly understandable!

What does society do with someone like this, other than put her in jail, where she is probably headed though not soon enough and certainly not for long enough? When someone is this depraved, lazy, and devoid of human compassion, what possible job can she be trusted to perform?

And how does someone become like this? What devil’s brew of  upbringing, education and culture is it than could breed someone who would apply for and accept the responsibility of being the lifeline for desperate human beings in need, and treat them like this?

21 thoughts on “Meet Crenshanda Williams, The 911 Operator Who Hangs Up On Callers When She Just Doesn’t Feel Like Talking To People”