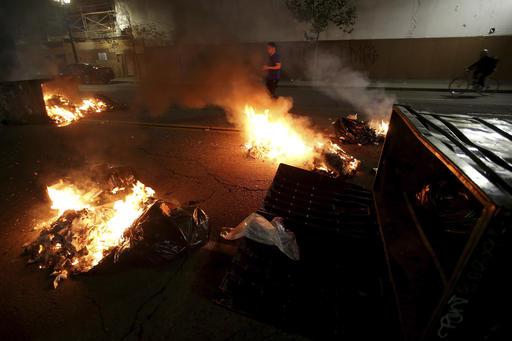 I have to adapt, with acknowledgement, a long-running gag wielded by Prof. Glenn Reynolds on his iconic conservative website Instapundit thus:

“I wrote if Donald Trump was elected President, we’d have a nation of assholes, and I was RIGHT!”

The problem is that the joke isn’t funny in this case. It’s tragic. What I am seeing in the news, watching on social media and reading on the web and in editorial pages shows me that the last eight years have done even more damage to American unity and ethics than I had realized.

First, a brief defense of the word “asshole.” It is a vulgar term, and I fully expect President Trump to use it in a press conference or rant some day. I first employed it here in 2010 to describe Julian Assange. I trust nobody will take issue with that decision. ( “Assange’s real priority is Assange, and everything and everyone else is secondary. Luckily, there is a word for such people, a useful label that will help us assess his actions and motives. Asshole.”)

Next was Rev. Terry Jones in 2011. Remember him? He was the self-righteous pastor who announced that he was going to publicly burn the Koran, knowing that the act would incite anti-American riots abroad, and probably get people killed. I wrote,

“What do you call someone who pours gasoline on a brush fire to get attention? Jerk is too mild. What do you call someone who intentionally makes a difficult problem of international perception even more difficult—intentionally? Fool is too kind.  Unethical, my staple, is too abstract. There just is no civil term for someone like Jones. He is an asshole. There are others running loose right now—Julian Assange, Michael Moore, Charlie Sheen—but none come close to Jones.”

Last year, as part of my plea to get the Republican Party and its primary voters to be civicly responsible Americans and prevent the nomination of Donald Trump—in my most fevered nightmares, like the ones where my son’s head has turned into an eggbeater and he is dating Miley Cyrus, I never conceived that Trump would actually be elected—I explained that having a President, always the nation’s most influential role model, who spoke and acted like Trump did would transform the culture of the U.S. and give us a whole generation of boorish, mean-spirited, impulsive and self-righteous young citizens, of which misogyny would only be the tip of the metaphorical iceberg. I still fear that this will be the effect of the Trump years, even if he proves to be a popular and successful president. Especially, if he is a popular and successful president.

What I did not fully comprehend is how the divisive actions and rhetoric emanating from the White House, prominent progressives and  the complicit popular culture and news media have already turned a substantial segment of the public into assholes. There have now been four days of violent tantrums across the U.S. as “disappointed” progressives, Democrats and illegal aliens “protest” the results of the election.  MSNBC’s Chris Matthews, an old-school Democrat and unabashed lover of the political process, was gobsmacked, despite his network’s official derogation of Donald Trump.

“What kind of a statement is it really there to make?” Matthews asked. “They lost!”

Of course, there is no statement, just self-indictments, like “We think we know what is best, and will scream and set fires until we get it,” “We have no respect for anyone who disagrees with us,” and “We only believe in the institutions of the nation we live in when they do what we want.” Most obvious of all: “If you don’t fall into lockstep with the policies and rhetoric of the last eight years, you’re a racist.”

Or perhaps “We’re assholes” is  clear enough.  They are assholes nourished and encouraged by the Obama/ Democratic party culture of arrogant and intolerant progressivism, the demonization of sincere dissent, and the ends justify the means.

1. Social media progressives, too old or burdened with jobs to actually hit the streets, are showing that it is not just the young whose ethical instincts were melted away in the last eight years. I have read rant after rant by nice, friendly, respectable alleged adults who were civil, if smug, during the campaign, furiously declaring anyone who didn’t vote for Hillary Clinton to be seeking to make pussy-grabbing the National Pastime and declaring anyone who wants to give the newly elected President a chance–a chance!—before he is removed from the White House by force is a racist and a traitor. Every such rant is followed by scores of “Likes.” Kids read these posts. Other posts by African-Americans, Muslims, Hispanic-Americans, gays and other minorities declare that they are terrified of midnight knocking at their doors, as the Trump Storm Troopers haul them away to god knows where. Sure, it’s free speech…it is also dangerously close to falsely shouting fire in a crowded theater.

2. The fear and the riots are being “justified” by alleged reports of an outbreak of hate crimes against various minorities by white thugs emboldened by Trump’s election, which would mean my prediction from last year was coming to pass in record time. So far, the reports have been exaggerated, fabricated, or wrong. This, of course, doesn’t matter on social media. The idea is to spread fear and hate.

3. I know I have recently written about this, but my amazement grows apace. What hypicrisy! The hypocrisy is so glaring and undeniable that I don’t understand why Democrats everywhere aren’t declaring their embarrassment and apologizing on behalf of their partisan colleagues. All of the attacks on Trump for inciting violence and intemperate rhetoric and refusing to accept the results of the election and trying to deny the legitimacy of the President apparently were expressing no genuinely-held principles or values. These were just opportunities to denigrate Trump, like making fun of his hair. The second that Trump won, it was all, as Newt Gingrich once said after he was caught brazenly lying and had to retract everything, “inoperative.” So Democrats and progressives set out to incite violence and spewed out intemperate rhetoric and refused to accept the results of the election and tried to illegitimate the President Elect, mostly from a sudden realization that we have an Electoral College, and do not directly vote for Presidents. This now means that, contrary to the Constitution, Trump wasn’t elected.

5. More head-exploding hypocrisy: Several pundits, including Clinton supporter Geraldo Rivera, have wondered how many of the protesters actually voted. It’s a good bet that many of them–most of them?— did not.  After all, the message that they were hearing was that Obama’s “third term” was assured. Why bother? Imagine burning cars to protest the results of an election they couldn’t be bothered to vote in! Why aren’t such angry protesters burning their own cars?

6. Residents of California and Oregon are blathering about secession on social media (in California, there is an effort to get it on the ballot, a la Brexit) because a single election is sufficient to make them abandon the nation. This is the grand scale version of the threats by celebrities to leave the country if Trump won (to date, no word from any of them that suggests they are going to make good on their promise), and equally redolent of arrogance, ignorance, and assholery. Unlike the riots, there was a lot of this from the conservative side in 2012, mostly from Texas. Jon Stewart of The Daily Show mocked the silly sore loser Republicans mercilessly, as did Ethics Alarms. Oddly, no similar ridicule is being directed at the current protestors from Stewart’s successors.

7. One of them, TBS comic Samantha Bee, hilariously summed up the election and spread the fearmongering and hate this way:

“It’s pretty clear who ruined America. White people. I guess ruining Brooklyn was just a dry run. The Caucasian nation showed up in droves to vote for Trump so I don’t want to hear a goddamn word about black voter turnout. How many times do we expect black people to build our country for us? White people, this is the worst.”

Let’s see: Dishonest (52% of whites voted for Trump), Double Standard (97% of blacks voting for Obama isn’t racial bias, 52% of whites voting for a white man as opposed to a white women proves racism), Racist (If Bee said that “black people” had ruined America, she would be pinked slipped withing minutes) and Not Funny, just vicious.

8. Accountability, one of the core ethical values that the Obama administration emphatically rejected during the past eight years, is at the nucleus of the asshole virus spread by Obama and Democratic leadership. Reports coming out various Democratic leadership meetings indicate that they will continue the society-corrosive trend.  They blame “racism” for their loss. They blame James Comey. They blame voter-suppression. They, incredibly, blame the news media, which was colluding with the Clinton campaign, and so biased it was apparent to all. They blame everything but the fact that they had a corrupt candidate who pushed group identification (“The First Woman President!”) over policy, and was defending an administration that had failed in every significant area, with its “signature achievement,” the Affordable Care Act, looking less affordable by the day. It’s all everyone else’s fault. No wonder their young supporters are throwing a tantrum.

Finally, where is Barack Obama? Where is the popular leader whom the rioters revere? How many days of rioting and violence before he deems it worthy of his time to address them directly, and say,

‘I’m ashamed of you, and you disgrace me, the nation, the party, our ideals and yourselves. This is not how our nation works, or how Americans accept electoral defeat. There is no excuse for this, and the history and traditions of our nation reject it utterly. President-Elect Trump prevailed in a hard-fought election, and should not be insulted in this manner, nor should I.  We have a duty to support him, his office and our Constitutional government, and to oppose his policies forcefully, civilly and a responsibly when it is appropriate. Do not make my final days in office an ugly display of bitterness and hate.’

It is his absolute duty to do this, and now. Unless, of course, he’s enjoying the riots.

You know what that would mean.

73 thoughts on “Ethics Observations On The Post-Election Freak-Out, or “A Nation of Assholes” Reconsidered”