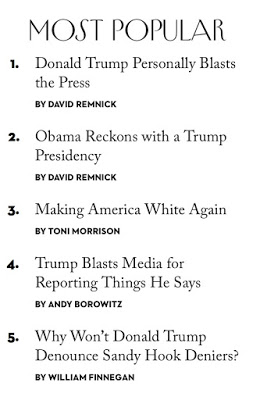 She’s right: what a relentlessly negative and divisive way to welcome a new President. The New Yorker is supposed to be the flagship publication for sophisticates and intellectuals. The better term for the audience appears to be “bitter snots.”  The flagship is playing to the mob, Althouse suggests. Is that all the media has become? Clickbait purveyors and the reinforcement of pre-existing biases, fears and prejudices?

I’ve been around a long time. I have never seen those on the losing side of any election behave so nastily, defiantly and unfairly. It reflects poorly on the nation, its politics, and its journalism, but it really reflects badly on Democrats and liberals. I’m embarrassed for them.

Ann tags this “Trump derangement syndrome.” That is too kind.

35 thoughts on “At Least They’re Keeping An Open Mind…”