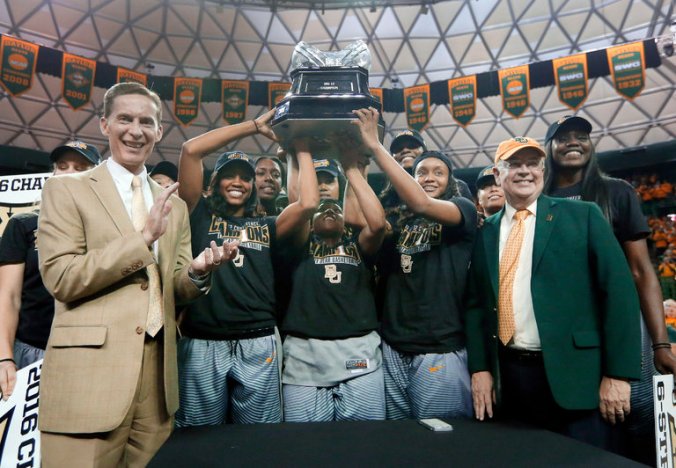 That’s McCaw on the left, Starr on the right, with the Baylor women’s basketball team.

Football is a sport, but in American culture its primary impact is as an ethics corrupter. The latest revolting example of this is occurring at Lynchburg, Virginia’s Liberty University, a prominent Christian fundamentalist institution founded by Jerry Falwell, the late TV evangelist and Religious Right icon. The school  is supposedly dedicated to imbuing its students with moral values, but if it comes to choosing between the Ten Commandments and pigskin glory, guess what comes out on top?

Last week, with great fanfare, Liberty hired Ian McCaw as its new athletic director. “My vision for Liberty is to position it as a pre-eminent Christian athletic program in America,” McCaw said during a news conference.

This is his first paying assignment since May, when he left his job as the athletic director at Baylor, also a Christian university. His departure was made essential after a thorough investigation that found that those overseeing Baylor’s  football team as well as the management of  the athletic department—that is, McCaw— had been informed of multiple gang rapes and sexual assault by team members and had ignored it, as any good football-loving Christian would….especially when a star was involved.

Baylor’s summary of its confidential investigation, overseen by the law firm of Pepper Hamilton, found that athletic program administrators and football coaches learned of accusations of gang and date rape over many years and did not report them or take appropriate action. This, the report found, “reinforces the perception that rules applicable to other students are not applicable to football players.”

Ethics Alarms calls this “The King’s Pass,” or “The Star Syndrome.” It is antithetical to moral and ethical principles, and, in theory, religion.

The report concluded that the “the choices made by football staff and athletics leadership, in some instances, posed a risk to campus safety and the integrity of the University.”

The summary omitted all names, but accountability is clear: if a college football team’s  rape and sexual assault cover-up occurs on your watch as athletic director, you own it. McCaw’s boss, Ken Starr (yes, that Ken Starr), the Baylor University president and chancellor, was demoted for his mishandling of the scandal and ultimately resigned. Baylor also fired its $6 million a year football coach Art Briles, who reported to McCaw, because he had allowed a team culture of sexual misconduct to continue and flourish.  On the mitigating side, though, Briles won a lot of football games that brought in a lot of revenue, and that’s what really mattered to Baylor. And McCaw.

Obviously, that’s what matters to Liberty too, for all of its supposed fealty to Christian values. When McCaw’s hiring caused students to protest on the university’s Facebook page, Jerry Falwell, Jr., who now carries on his father’s good work, defended McCaw on the university’s website.  Liberty had conducted its own investigation, he said. Far from being fired McCaw’s “decision to resign was his own choice.” You know…like Richard Nixon, Ken Lay, Newt Gingrich, Eliot Spitzer, Debby Wasserman Schultz..

“If he made any mistakes at Baylor,” Falwell write, “they appear to be technical and unintentional.”

Sure. Technical. From the Baylor report summary:

Pepper’s findings of fact… reflect a fundamental failure by Baylor to implement Title IX of the Education Amendments of 1972 (Title IX) and the Violence Against Women Reauthorization Act of 2013 (VAWA). Pepper found that Baylor’s efforts to implement Title IX were slow, ad hoc, and hindered by a lack of institutional support and engagement by senior leadership….University administrators that directly discouraged complainants from reporting or participating in student conduct processes, or that contributed to or accommodated a hostile environment. In one instance, those actions constituted retaliation against a complainant for reporting sexual assault. In addition to broader University failings, Pepper found specific failings within both the football program and Athletics Department leadership, including a failure to identify and respond to a pattern of sexual violence by a football player, to take action in response to reports of a sexual assault by multiple football players, and to take action in response to a report of dating violence. Pepper’s findings also reflect significant concerns about the tone and culture within Baylor’s football program as it relates to accountability for all forms of athlete misconduct.

Liberty’s new hire sends the  loud and unmistakable message that its principles and values—indeed, dear students, that ALL  principles and values—are adjustable when enough money and athletic success are within reach. It mocks the institution’s mission, and could and should serve as evidence when someone asks why organized religion is viewed with increasing cynicism by the young.