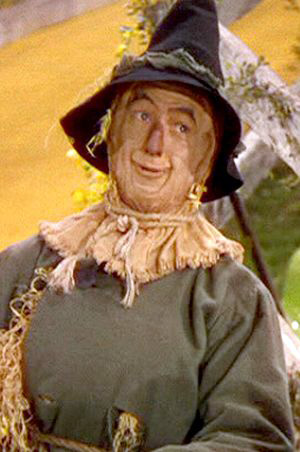 Snopes.com’s favorite in “The Wizard of Oz,” and I don’t mean Ray Bolger…

The July 31 Ethics Alarms post detailing how snopes.com, usually referred to as the “fact and rumor check website,” has quietly morphed into just another progressive Democrat online spin-merchant nailed these frauds based on their tortured spin to protect Hillary Clinton and her election prospects from legitimate criticism and, in the case of Clinton’s decade-old defense of a child rapist, illegitimate criticism based on genuine facts that Snopes denied anyway.

That is…don’t ask me why…the most read, linked and shared Ethics Alarms post ever. It even was the target of some of Hillary’s paid online trolls, whom I recognized when I realized they were writing from the same (false) talking points memo. Just to be clear, there is no longer any legitimate dispute that Snopes can’t be trusted, is subject to partisan bias, and is thus 100% useless as a “fact and rumor check website,” since their writers warp facts and debunk the truth when they feel like it.

I ended the July pots on this depressing note for me, because I once used and recommended the site with confidence:

That’s the end for Snopes. Even one example of bias-fed misrepresentation ends any justifiable trust readers can have that the site is fair, objective and trustworthy. Snopes has proven that it has a political and partisan agenda, and that it is willing to mislead and deceive its readers to advance it.

Can it recover? Maybe, but not without…

…Getting out of the political fact-checking business.

…Confessing its betrayal of trust and capitulation to partisan bias, apologizing, and taking remedial measures.

With all the misinformation on the web, a trustworthy web site like Snopes used to be is essential. Unfortunately, a site that is the purveyor of falsity cannot also be the antidote for it.

I’ll miss Snopes, but until it acknowledges its ethics breach and convinces me that the site’s days of spinning and lying were a short-lived aberration, I won’t be using it again.

Two developments since this was written are worth noting. The weird one is that the site has been prominently cited as an authority more often since that post than before it. NBC’s FBI action drama “Blind Spot” had a character settle an argument by referring to Snopes, a first, and increasing numbers of news reports and op-eds have cited Snopes as well. Obviously the scriptwriters, reporters and pundits don’t read “Ethics Alarms,” but this is pure negligence. Snopes can’t be trusted. It’s as simple as that.

I have received from readers more examples of Snopes Spinning For Democrats, but this one, flagged by the Daily Caller, is worthy of this brief return to the issue.

The report is true. I almost wrote about it at the time. The grants did and do create the appearance of impropriety, which is enough to make them improper. Kerry’s daughter’s non-profit shouldn’t have been getting taxpayer funds from the State Department while her father was a powerful Senator, and worse, the chair of a committee overseeing State (it looks like a bribe), and she definitely shouldn’t be getting money from State while her father is Secretary of State. This is Government Ethics 101.

Is it a conflict of interest for Kerry himself, rather than just the appearance of one? I don’t know. If he approved the grants, it would be. It is, however, a conflict of interest for somebody, beyond question. Anyone at State who would benefit from Kerry’s favor and who helped Vanessa get her money was not making the funding decision without competing obligations and interests.

For some reason, Snopes decided to wait until last week to “fact-check” the story, which would have been embarrassing to Kerry and the Obama Administration if  the mainstream media hadn’t intentionally embargoed the story to make it look like “fake news.” [This is the game, you know, and why Democrats and progressives enable it by looking the other way, I don’t know, unless it is because they have no integrity. Did the New York Times report the story? No. The Washington Post? CNN, CBS, NBC, ABC? No! One non-conservative source that I could track down, USA Today, ran the story and that was it. For the rest, apparently, not revealing the Obama administration’s shoddy ethics was mandatory to accomplish the news media’s prime directive, electing Hillary Clinton.]

Snopes writer David Emery attacked the story like this:

Then Emery used government documents to prove the claim “false.” It was the State Department, and not John Kerry, Emery showed, who gave money to his  daughter’s nonprofit through the Peace Corps.

Okay, spot the lie. What is the difference between these two headline links on Google?

Nowhere in the news story being “debunked” is there a claim that Kerry was personally involved, and “funneled” anything.  Ethically, the grants are still improper whether Dr. Kerry’s dad was involved or not. But failing to be able to show that the report was wrong on the facts, Emery resorted to a blatant straw man. He couldn’t explain away the fact that Dr. Kerry’s charity was launched in her father’s home, making Sec. Kerry’s later statements that he was barely aware of it dubious at best—so Emery didn’t mention it.   He couldn’t challenge the facts that the 2015 contract extension awarded to the organization violated Peace Corps policy, or that the Peace Corps’ non-competitive award of federal tax dollars to Seed (that’s the program’s name)by claiming it met requirements for sole-source procurements was at least suspicious, or that Seed’s performance was so disappointing that it required contract modifications.

His solution was to disprove a claim that nobody made.

Let’s hear it for SNOPES, Ladies and Gentlemen! The fact-checking website that pays no attention to facts when it suits its political agenda!

*For those readers who don’t get the reference, shape up. I don’t care if the joke is 40 years old. If you’re  culturally literate, you know it.

10 thoughts on “Update: Generalissimo Franco* Is Still Dead, And Snopes Is Still An Unethical Website”