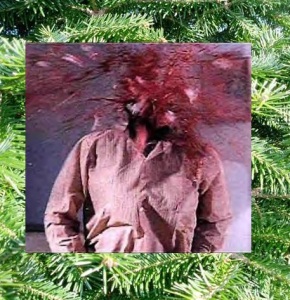 How somebody in the public eye can utter opinions like this for publication is absolutely beyond comprehension.  Hence the inside of my head is now outside my head. The red on the walls and ceiling looks kind of Christmassy, I must say.

Carl Paladino, a local developer Republican member of the Erie County school board who was Donald Trump’s campaign’s co-chair in New York answered the first two questions this way:

Paladino: “Obama catches mad cow disease after being caught having relations with a Herford. He dies before his trial and is buried in a cow pasture next to Valerie Jarret, who died weeks prior, after being convicted of sedition and treason, when a Jihady cell mate mistook her for being a nice person and decapitated her.”

Paladino: “Michelle Obama. I’d like her to return to being a male and let loose in the outback of Zimbabwe where she lives comfortably in a cave with Maxie, the gorilla.”

What is this? A breakdown? The equivalent of civic suicide? As I would assume the most mentally handicapped of socially-inept morons would expect, these vile comments, which Paladino knew would be published, immediately caused him to be condemned far and wide. Donald Trump’s transition team  called his remarks “absolutely reprehensible.”  Erie County Executive Mark C. Poloncarz called on Paladino to resign immediately. Assemblyman Sean Ryan D-Buffalo said Paladino’s comments were “outrageous, dangerous and disturbing.” New York Governor Andrew M. Cuomo described the remarks as “racist, ugly and reprehensible.”  Buffalo Mayor Byron W. Brown called the comments “terrible.”

By late yesterday, over a thousand people had signed an online petition calling for Paladino’s removal from the school board. Paladino’s response to the uproar?

“Yeah, I’m not politically correct,” he said. “They asked what I want, and I told them.”

Will someone explain to this idiot the difference between political incorrectness and pure, unadulterated racist hate? Political correctness is the effort to make political opinions, criticism, candor, humor and satire  regarding certain topics difficult or impossible to express, by associating legitimate  ideas with flawed values and character. Societal objections to publicly calling for violence and death to be inflicted on anyone have to do with long-standing, bi-partisan social norms regarding civility, decency, fairness, respect and the Golden Rule. Revulsion at pronouncing any human being subhuman,  impugning a woman’s femininity and comparing an African American woman to a gorilla is based on the rejection of denigration and racism. Expressing such a level of hatred and disrespect for the President, his wife and his top advisor shatters all boundaries for acceptable civilized discourse.

Paladino issued what he appears to think is an explanation for his public vomit. Get this:

Ah. That explains it. It was a joke.

It’s not worth anyone’s time spending much effort discussing what’s the matter with Palladino’s venom, since if it isn’t obvious to you,  you are beyond hope. It is worth our consideration of what forces are at work causing someone to think that wishing death on the President and calling the First Lady an ape is acceptable for any reason, ever, any place, and that such vicious rhetoric accomplishes anything but exacerbating division and distrust in our nation.

I  also suggest that the anti-Trump forces compare Carl’s rhetoric with their own toward the newly elected President, his family and his supporters.

28 thoughts on “More From The “When Ethics Alarms Are Devoured By Hysteria And Partisan Hate” Files: KABOOM!”