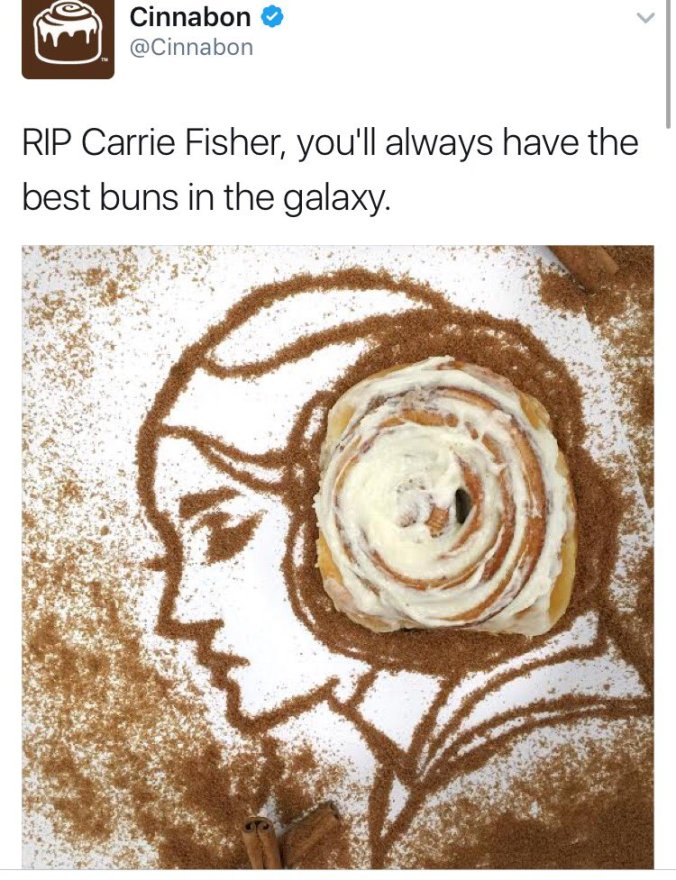 First I was going to post an essay about Cinnebon’s humorous tweet above under the title “How Humor Dies.” Our culture is in serious trouble if a clever, playful, obvious joke like this attracts so much criticism that it generates a retraction and an apology.Clearly, there are Political Correctness Furies on the Left and  Puritan Scolds on the Right lurking and  lying in wait to make any attempt at levity too much of a risk for all but the socially inept or defiantly rude to attempt. I confess, I laughed out loud when I saw Cinnebon’s gag. I thought the company deserved applause, not opprobrium.

Then I thought about it, and decided to make the episode an Ethics Alarms ethics quiz. Does the fact that Cinnebon can be accused of using Carrie Fisher’s tragic death as product promotion outweigh the cleverness of the tweet, or was the joke a natural one for the sticky bun-makers to make? Who better to remind us of all the jokes about Leia’s odd hairstyle when “Star Wars” debuted? Maybe this was one example where the “she would have approved” standard might be more than a rationalization. Is there any doubt that Carrie Fisher would have laughed at Cinnebon’s joke more heartily than anyone?

Fortunately, I thought some more.

I hadn’t realized until just a few minutes ago that the tweet was issued on the day Carrie Fisher died.  Ick, and also, yecchh, as well as “Ethics Foul!”

It doesn’t matter how clever, well-executed or funny it was. Krusty the Clown could have told Cinnebon what was wrong with the tweet in a trice, if they had the sense to ask, and Krusty wasn’t a cartoon character.

13 thoughts on “The Ethical Problem With The Cinnebon Tweet”