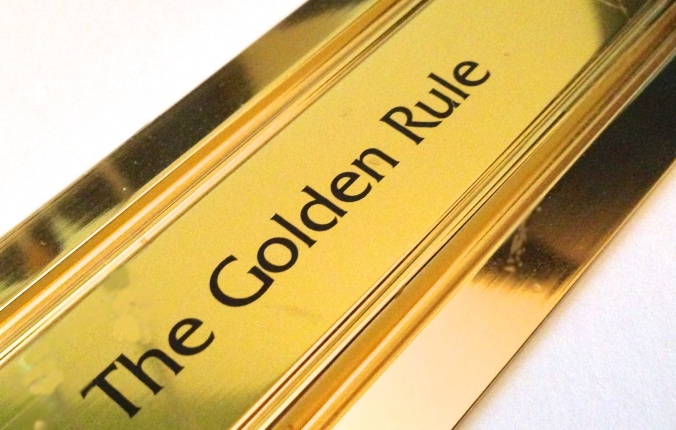 Texaggo4’s Comment of the Day  enriched the surprisingly lively discussion about  the ethical conundrum of how many single-item purchasers a CVS customer in line should let go before him to checkout if he had, as I did last week, a full cart.

His discussion of applying The Golden Rule to the situation took off from my comment referring to his earlier assertion that it wasn’t strictly a question settled by Reciprocity. The numbered statements on Tex’s post are from me. Here is Tex’s COTD on the post, “CVS Line Ethics”—I added another brief comment he offered in the same thread at the end, as it is germane:

1.“I don’t recall Jesus, Zoroaster, Buddha and the rest ever noting the CVS exception.”

I don’t recall ever noting an exception either…since this isn’t necessarily Golden Rule territory. In this scenario, application of the Golden Rule would arise as the exception.

It is very much about obligation– and obligation isn’t a dirty word. The real question here is where do you draw the line on whose needs outweigh the others, and if they really do or not. Golden Rule would compel you to allow someone to cut if their cutting *actually* decreases *actual* harm. The Golden Rule doesn’t compel you to allow someone to cut *just because* it increases an already-present level of contentment in their lives. It may strongly suggest such conduct in so much as it doesn’t needlessly impose on you, but it no means compels it, hence this isn’t necessarily a Golden Rule scenario.

You see, “so whatever you wish that others would do to you, do also to them, for this is the Law and the Prophets” is a painfully open ended, and as such-much criticized maxim, when taken out of context. So, the Golden Rule IS the Law. Looking at the phrase elsewhere one would glean that ALL the Law, and therefore the Golden Rule, depends on two basic commands:

We often forget that these *two* commands consist of *three* considerations. The first (God-oriented) is easy, the 2nd (others-oriented) is also easy, but we immediately fail to recognize that the 2nd is conditioned on a 3rd (yourself). How can you love others first if you don’t love yourself? This opens a huge discussion on mental and psychological issues. It certainly leads one to understand masochist conduct DOES NOT guide the application of the Golden Rule.

So what then of the scenario of the endless line cutting because you would want everyone to let you cut, therefore you must let them cut…? Well, you fail to switch positions in your consideration, when you run across the poor shmuck who has caught himself in an endless loop allowing others to cut, do you not, as his next beneficiary recognize his own plight, apply you own consideration to him and say “no, by all means, go ahead before me”?

And you know how this is handled quickly and in the short term? Communication.

“3. Behaving with kindness and consideration to one does not in any way change the altruistic value of the conduct to the next, or the next.”

“4. As to the appearance of bias, ethics involves taking reasonable measures to avid causing gratuitous harm. Every time we give someone a reason to believe that society is aligned against them, we do our little part to make society less unified.”

Then talk to them…

I almost want to consider it a type of reversal of the categorical imperative, whereas Kant’s proposition considers an action from the point of view “if EVERYONE” engaged in this conduct what would the world be like….this situation is from the point of view of “If I engaged in THIS conduct ALL the time” what would the world be like.

And the answer is, just the same, only in about a couple days, the “good actor” would be either dead from starvation or institutionalized as a nutcase.

And the answer is discovered, not through some preset rule of thumb or ethical self-programming, but through merely talking with your fellow man, find out their needs and find out if they are willing to acquiesce to your needs, if not, then see if you can reasonably accommodate theirs.

5 thoughts on “Comment Of The Day: “CVS Line Ethics””