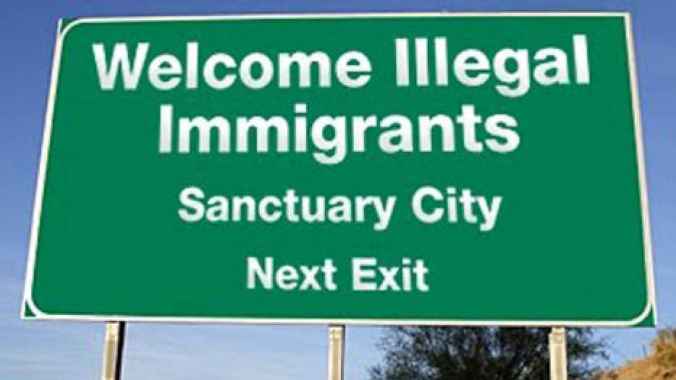 “To anyone who feels threatened today, or vulnerable, you are safe in Boston. We will do everything lawful in our powerful to protect you. If necessary, we will use City Hall itself to shelter and protect anyone who’s targeted unjustly.”

Is Mayor Walsh under the impression that America’s laws protecting its borders and extending its sovereignty over the crucial area of immigration control are the equivalent of the Fugitive Slave Act? It would seem so.

The grandstanding statement by Walsh is the most extreme yet from the 100% wrong and unethical mayors of so-called sanctuary cities, which include major metropolises like Boston, Los Angeles, New York, Los Angeles, Chicago, and smaller cities, many of them college towns, like New Haven; Syracuse; and Austin. There are over 300 in all.

The legal issue is interesting and not at all settled. A 2012 Supreme Court decision held that Congress is not permitted to set conditions on spending to coerce states or localities to participate in federal programs against their will, but other decisions are no so clear. Moreover, when a city actively interferes with the enforcement of the law—not merely not participating in the program, but actively interfering with it the in way the Walsh describes—the federal government should have some effective way of responding. I see another SCOTUS case coming, don’t you? What if Boston decided that it would provide sanctuary for drug dealers, kidnappers, spies and terrorists? Could it do that, too?

Some of the other mayors have been only slightly more moderate. San Francisco’s mayor, Ed Lee, issued a joint statement with the mayor of Oakland, Libby Schaaf, and Mayor Sam Liccardo of San Jose:

“We will not give in to threats, or political grandstanding. Together, the Bay Area will stay true to our values of inclusiveness, compassion and equality, and united against any and all efforts to divide our residents, our cities, and our country.”

Having illegal aliens who have committed crimes flee to Chicago might work out, since the murder rate there should thin their ranks considerably.

I will write this until my heart gives out: I do not understand how the position that the US should allow illegal immigrants to cross its borders without penalty, and indeed give them incentives to do so, can be defended ethically or legally. These incredible statements are in defiance of an order aimed at citizens of other nations who not broke the law coming here or staying here, but continued to break them intentionally. I do not understand why any civically literate person doesn’t just double over with laughter when they read what these mayors are saying, as if it makes any sense at all except to pick up votes.

Yes, uprooting illegals who have lived in the US for years while obeying the law because the government did not do its job and enforce the laws is ugly and impractical. This does not mean that the message should be sent far and wide that if you can sneak past our porous border patrols or illegally remain here after a visa has expired, you are welcome and  the salt of the earth. Doing that is insane, and yet that is the message that the nation, with the complicity of both parties, has been sending.

It is incompetent, it is irresponsible, and it is foolish. I have yet to hear an argument for allowing illegal immigrants to enter the country and stay here that isn’t based on emotion, rationalizations, or a cynical political agenda. Is there one? I’ve been studying the issue for decades, since I oversaw a study  for the U.S. Chamber of Commerce. I didn’t encounter one then, and I haven’t in the intervening years that cost me my hair, innocence and girlish figure.

I want someone, a persistent, honest journalist would do, to make any of these mayors articulate exactly what they think is a responsible approach to immigration laws. Stipulated: “We shouldn’t have any” is an endorsement of anarchism and incompetence. “We should have immigration laws, but not enforce them” is proof positive of idiocy, and should disqualify the speaker from future public office as well as forcing him or her to wear mittens attached by a string.

“We should enforce them, but once someone slips through the net, they get a prize of citizenship, as long as they really, really want to come here” seems to be the current definition of “immigration reform.” Is it? These mayoral pronouncements are high-blown rhetoric that seem to say that violating U.S. laws is a noble act. Why does anyone support that?

This single issue, more than any other, made Donald Trump President. When he raised it and ever since, the strategy of the Left has been to focus on the way he said that we needed to obey the laws, or that he was being a racist to want to enforce them, or that he was a fool in the manner that he said he would enforce them, none of which answered the core question. How can anyone, in a nation of laws, justify supporting the flagrant violators of immigration laws, while denigrating those who want to enforce them? I want to hear Walsh and his pals explain that clearly and persuasively. Nobody should respect their opinion until they do.