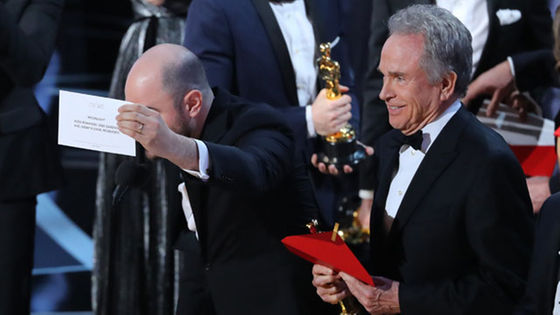 In an essay recounting the Wrong Envelope Oscars Disaster, Washington Post writer Stephanie Merry lionizes  “La La Land” producer Jordan Horowitz, who after learning that his movie was not, in fact, the actual “Best Picture” winner, took charge. Faye Dunaway was dashing for cover, MC Jimmy Kimmel was wishing he was in an undersea paradise, and in general everyone was losing their their heads and blaming it on Warren Beatty, but the producer took the microphone and said,“‘Moonlight’ won. Guys, guys, I’m sorry, no. There’s a mistake. ‘Moonlight,’ you guys won best picture.This is not a joke. Come up here.

Then he held up the card just pulled from the actual award envelope, so that the cameras could zoom in.

Merry seems to think this was some extraordinary act of improvisation and heroism. True, Horowitz did what ethical people do when in a position to: he fixed the problem.  Still, his actions only seem remarkable in light of the incompetence all around him. Ah, but Merry has an ulterior motive, you see, because the Post, like the New York Times and so many other news sources, apparently pay a bounty for every story that can somehow betwisted into a attack on the President. That’s the full time mission now, and journalists really, truly think that’s responsible journalism, and responsible citizenry, though it is neither. So she wrote:

He told the truth even though it was difficult and awkward and embarrassing, because he had just stood in front of the world and thanked his friends and family for an award that wasn’t his. But that didn’t stop him from admitting that he was wrong, even though he was a victim of circumstance. He could have slunk offstage and let Jimmy Kimmel and Warren Beatty continue to fumble through an explanation. Instead he did the dirty work with what looked like pride.

This behavior shouldn’t be all that exceptional, but truth has been hard to come by lately. We’ve all just come off an election in which politicians have happily danced around facts, and the president continues to make false or misleading claims. When the truth is inconvenient, a lot of people spin it or bend it to their will. But that’s not Horowitz’s style.

What, holding on to the Oscar like grim death and screaming, “I WON! I WON!” and running into the wings cackling maniacally isn’t his style? I should hope not! What possible alternative did he have in that situation? He didn’t have to “tell the truth,” he just had to submit to it. Yes, he was gracious. But the episode had no lessons for President Trump, except in Merry’s fevered, Trump-addled mind.

Yet she had laid out a very useful and germane metaphor, so good and timely that I will give her credit for it even though Bias Made Her Stupid, and blind to boot.

“La La Land” had been conceded the Best Picture award for months. Virtually every critic and prognosticator predicted its victory, even when one felt another film was more deserving. The film’s cast and crew had to be very confident entering the theater that night, though the film’s failure to win some of the lesser awards was ominous: the predicted sweep wasn’t happening. Still, all the polls said the movie was a lock.

Then, just when victory seemed certain, it was gone. An underdog competitor took the prize, and not cleanly, either. After all, the deck had been stacked in favor of giving black artists more recognition. And what the heck was going on with the alleged guardians of the voting results?

Remind you of anything?

The lesson a non-blinded, non-biased, not partisan writer would have seen in brilliant light was that what Horowitz and “La La Land” did was a vivid and necessary reminder of the only ethical, gracious, fair, decent, honorable and responsible way to handle such a defeat. To protest, complain, question the process, deny the legitimacy of the victors, refuse to accept the results and demand recounts, do-overs and investigation would have torn the community and the industry apart, and also made the losers look  like utter, vile, juvenile, anti-democratic assholes…because that’s what they would have been.

Thus it is the wrong way to behave, and obviously so. The people she was praising did not act that way, and yet in an analogous national event of great import, her party, her ideological compatriots and her fellow journalists and pundits did, and are still.  Yet Stephanie Merry could not bring herself to think it, much less write it.

That is why the news media is now truly an enemy of the American public. Where their duty is to clarify and explain, they choose to distort, slant and avoid hard truths they can’t face themselves. Not even choose, any more: they can’t help themselves. They are blind and biased, and all they can do now is infect the public with the same maladies.

19 thoughts on “Washington Post Writer Stephanie Merry Has A Devastating Metaphor Right In Front Of Her, And Can’t See It. Three Guesses Why…”