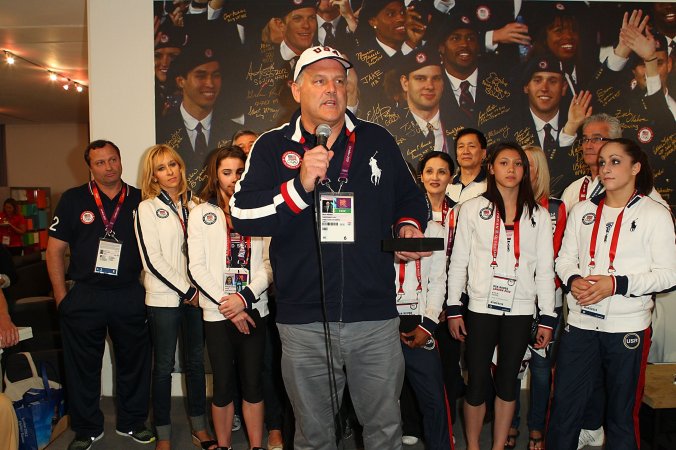 Both are large, powerful organizations that facilitated the sexual abuse of children in order to protect their money and reputation.

Yes, you can add Penn state to that list too.

I’m really sick today, and it’s hard writing, thinking and especially typing, but maybe I don’t have to explicate this so much.  Larry Nassar, the national team doctor for USA Gymnastics, is accused of abusing dozens of female gymnasts. More than 80 victims have come forward to claim that he sexually assaulted them. Dr. Nassar was accused of 22 counts of first-degree criminal sexual conduct last month in Michigan. The scandal has also claimed Steve Penny (above), president of U.S.A. Gymnastics, who recently resigned after 12 years in the post.

A sport that has its priorities straight does not hire someone like Penny to lead it. He had been the director of media and public relations for U.S.A. Cycling in the early 1990s,promoting the sport and its superstar, Lance Armstrong. When he took the job at U.S.A. Gymnastics, one of his responsibilities there was to evaluate sexual assault accusations and determine if they warranted being reported to the police. Notes Juliet Macur in the New York Times,

“This is how the world of Olympic sports in the United States has operated for years: No one thought it strange that a sports marketer was in the role of sex crimes investigator.”

Is it any surprise that the culture of women’s gymnastics was poisoned with sexual predators? We had been told by Nadia Comenici that she had been abused, and the sport’s optics were, to use a technical term, oogie. All those tiny women-girls, their growth and maturation retarded by dieting and excessively rigorous training, being hugged repeatedly by bear-like coaches: I stopped finding the sport anything but disturbing years ago. (My feminist friends, who worshiped the little sprites—the ice-skaters too–told me I had a dirty mind.) Here is  a section of a recent column by former gymnastic champion Jessica Howard:

By the time I reached the World Championships in 1999, my hips hurt so badly that at times I could barely walk. That was the environment I trained in that I believe created an opening for Larry Nassar, the national team doctor for USA Gymnastics, to sexually abuse me…the first time I met “Larry” I immediately trusted him. He was the premier USA Gymnastics doctor with an international reputation, and I felt lucky to have been invited to the ranch to work with him.

For our first appointment, he asked me to wear loose shorts and no underwear. That seemed strange, but I obeyed. As in training, I wanted to be perfect. He began to massage my legs, and then quickly moved inwards on my thighs. He then massaged his way into me. I was rigid and uncomfortable, but I didn’t realize what was happening. I was confused, and thought that it must just be what had to happen. This scenario happened repeatedly over the course of my week at the ranch. At no time was there ever another adult in the room. Coming off of a difficult year of training, Dr. Nassar reached out as the good guy, supporting me emotionally and promising me relief from the pain. Now I know that in actuality he expertly abused me under the guise of “treatment.”

I trusted USA Gymnastics. But I was sexually abused, as were other elite athletes, including Jamie Dantzscher, a 2000 Olympian, and Jeannette Antolin, who was a U.S. national team member. And the abuse was not limited to Dr. Nassar. According to more than 5,600 pages of USA Gymnastics records released to the IndyStar on March 3 after a lengthy court battle, some of the 54 coaches with sexual abuse complaint files spanning 10 years weren’t banned from gymnastics until years after USA Gymnastics discovered they were convicted of crimes against children.

Other accounts tell how this was ingrained in the system:

What took everyone so long?

According to court documents released this month, in response to a request by The Indianapolis Star, which Penny called “a witch hunt,” U.S.A. Gymnastics had complaint files on 54 coaches, from 1996 to 2006. Those coaches were accused of misconduct, including sexually assaulting their athletes, and the federation had empowered itself to investigate those cases before deciding whether to contact law enforcement. In a deposition in one lawsuit brought against U.S.A. Gymnastics by a gymnast charging abuse, here’s Penny’s explanation for his failure to act: “To the best of my knowledge, there’s no duty to report if you are — if you are a third party to some allegation.”

Even when a child’ safety is involved—no duty to report. Nice. More:

In 2011, U.S.A. Gymnastics received a detailed account of abuse involving Marvin Sharp, a former coach of the year, but Penny and the federation didn’t report it until 2015. There was a lot to be suspicious about.About 15 miles from U.S.A. Gymnastics’ headquarters, Sharp had a photo studio in his Indianapolis gym. On the gym’s website, he offered “portrait sittings and ‘action’ portraits.” Sharp, who coached the Olympian and world champion Bridget Sloan, would ask parents to leave the room for a closed-door, two-hour session when he took pictures of the gymnasts. In many cases, the parents complied.

In August 2015, Sharp was arrested after a 14-year-old came forward with claims of abuse. He was later charged with child pornography, child molestation and sexual abuse with a minor. In a raid of Sharp’s house and gym, the police found more than 1,000 digital photos of girls dressed in leotards, adult shirts, bathing suits and dresses, with no underwear and with their genitals exposed. These girls were as young as 5.

Wouldn’t you think that situations where men enter a field that places them in close contact with trusting and vulnerable children would be one where there is special scrutiny to be vigilant  regarding this crime? It seems like the opposite is true, even after the horrendous example of the Catholic priests.

How many crimes could have been prevented if Penny had reported Sharp to the police back in 2011, and if U.S.A. Gymnastics did what was right in each report of sexual abuse it received — protect its athletes, not its organization? John Manly, a lawyer representing more than 70 clients in the case against Nassar, the former team doctor, has an idea.

“Hundreds of children would have been saved,” said Manly, who has also represented many clients who said they were abused by Roman Catholic priests. “An organization shouldn’t do the investigation, and we know why. We know it’s a failed model because that’s the Catholic bishops model from 2000. The best thing to do is, if you suspect child abuse, you pick up the phone, call the police and file a report.”

39 thoughts on “Pop Quiz: What Does U.S.A. Gymnastics Have In Common With The Roman Catholic Church?”