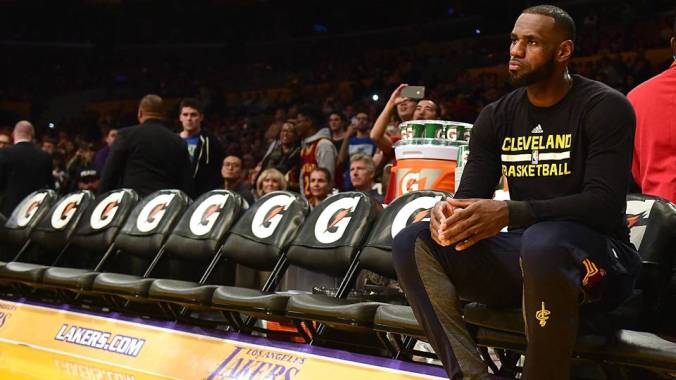 For a second consecutive Saturday, ABC’s  Saturday prime time NBA game was a pre-rigged dud. The LA Clippers blew out the supposedly star-studded Cavaliers, 108-78, as chants of “We want LeBron” echoed through the arena. The three super-stars that make Cleveland an NBA powerhouse,  LeBron James, Kyrie Irving and Kevin Love, were all kept out of the game, not because they were injured,  but because Cleveland coach Ty Lue had decided to rest his “Big 3” in the first of back-to-back games. Sure enough, all three played against the Lakers the next day.

It has become standard practice in the NBA for play-off bound teams to rest stars for “strategic purposes,” meaning that in a league where more than half the teams make the play-offs and the regular season is little more than an exhibition for most of them, it makes no sense to blow out the stars until a championship is on the line.  The NBA, in short, has no integrity. (Neither does the National Hockey League, for the same reason.) The previous Saturday, the San Antonio Spurs blew out the Warriors, 107-85,  as Golden State fielded a  JV team, with Stephen Curry, Draymond Green and Klay Thompson all on the bench. Yet NBA’s new nine-year, $24 billion media rights deal with ABC, Disney and Turner Broadcasting included Saturday Primetime along with  the TNT Thursday Night NBA game and ESPN’s Wednesday and Friday night broadcasts, to showcase the best of the NBA. (Most of the NBA teams never make it to the Saturday ABC game.)

Shouldn’t that kind of money guarantee that the teams put their best players out on the court? NBA fans also typically shell out three figures for tickets. Doesn’t the league pull what is in essence a bait and switch by allowing a game to be treated as a virtual forfeit?

During Saturday’s telecast, ABC pointedly showed signs from Clippers fans at its Staples Center complaining that fans had paid hundreds of dollars for tickets, only to watch the Cavs’ Big Three sit on the sidelines in their warmup clothes. Over at ESPN, Mark Jackson and Jeff Van Gundy condemned NBA coaches resting healthy stars as an “absolute joke.” Said Jackson,  “Who is protecting the fan? Who is protecting the game of basketball? Something’s got to be done.” Van Gundy accused the league, coaches and players of pulling a bait and switch on fans (and more to the point, Disney, ABC, ESPN and Turner, who are periodically getting half-hearted TV games for their billions) . “If this was any other business, this would be a prosecutor offense,” Van Gundy said.

After the game, coach Lue told reporters that his team could afford the loss, suggesting that the price of preparing his team to prevail in the play-offs was an occasional 30-point blow-out in March.

This is an ethics conflict. The team’s primary duty is to win a championship, and if the schedule and rules are set up so that kissing-off some games  during the regular season (by not playing its stars) maximizes the chances of ultimate success, then that’s the ethical course. It is not the ethical course, however, if TV networks and ticket buyers have been induced to pay money under the misconception that all televised NBA games would be contested to the best of the teams’ abilities.

NBA commissioner Adam Silver gets it.  Two days after the Cavaliers fiasco, he called the practice of teams resting marquee players “an extremely significant issue for our league” in a memo sent to team owners.  In the memo, Silver warned of ‎”significant penalties” for teams that don’t abide by the league’s standing rules for providing ‎”notice to the league office, their opponent, and the media immediately upon a determination that a player will not participate in a game due to rest,” noting that these decisions have serious consequences for  “fans and business partners,” the reputation of the league and “perception of our game.”

Let me refine my earlier statement: Silver sort of gets it. He is, in fact, blaming the victims here. The NBA, not the teams or coaches, make the schedules and devised the cynical system whereby the regular season games mean nothing to the best teams in the league, which know they can make the play-offs at half-steam. Coaches also know that going into the play-offs with injured or burned-out stars means their jobs are at risk. Is Silver really telling teams to alert their TV partners in advance that a televised game will be a wipe-out, so it is in the untenable position of either alerting audiences to watch re-runs of old “Big Bang Theory” episodes, or risk being accused of a “bait and switch” themselves?

The ugly truth is this: there is no ethical solution. The National Basketball Association has created its own Bizarro World, where there is no respect for integrity and money is all that matters. In a Bizarro World, the unethical is ethical, and the ethical doesn’t work. Give the networks, the TV audience and paying customers what they have a right to expect in March, and lose the championship (and play worse basketball)  in June, when the TV ratings matter most. Tank games in March to maximize the chances of winning later, and get fined by the league that put you in this impossible position, while being flamed by broadcasters. It’s Ethics Zugswang.

This, by the way, is why I don’t follow pro basketball.

31 thoughts on “The NBA’s Unethical, Unavoidable, “Bait And Switch””