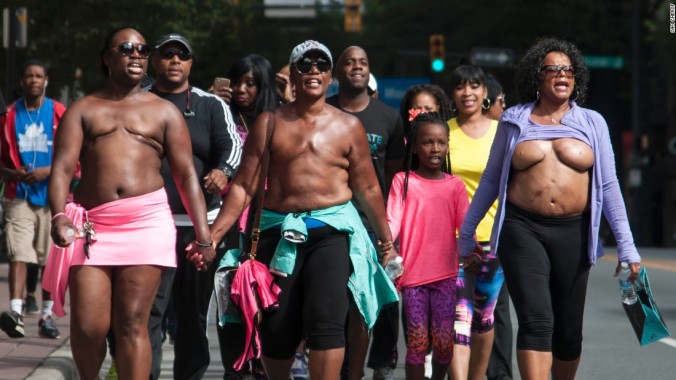 “If even one woman’s life was saved thanks to a conversation Paulette started, wasn’t that enough? So what if our hero was flawed?”

Oh, no: the “just one child/just one life” rationalization again! (Which, I now notice, isn’t on the Rationalizations List, and it should be.)

Ravitz writes this to begin a long, detailed, infuriating narrative about the well-publicized and much-hyped crusade of Leaphart, whose journey, displaying her scarred chest,  was to ostensibly demand more funds for cancer research cure and  better and more affordable health care. She said she was a champion for women without breasts “to believe in their beauty and be proud of their strength.”

“By showcasing and embracing her scars, she hoped to inspire others to do the same,” Ravitz writes. “Her journey was bold, visual, moving. It offered a hero to admire and, given Paulette’s audacious decision to walk shirtless in the face of strangers, a rich spectacle to witness. It spoke to African-American women, who face the highest breast cancer mortality rate. It inspired legions of survivors. And it spoke to many who’d lost someone to the disease.”

Ravitz is conflicted, clearly, as she tells the complicated story of the woman whose official cause is admirable, but whose motives are murky, and whose credibility is non-existent. While explaining the mounds of evidence she uncovered that the woman has a record of deception, venality and financial flim-flam, that she sees the long walk as a ticket to fame and cash, and that she has lied and fabricated aspects of her ‘inspirational story” repeatedly while the efforts of journalists to pin her down. Yet Ravitz still ends up by  being wishy-washy and equivocal:

“There’s no way to measure how much of a difference Paulette Leaphart made in shaping the conversation about cancer in this country. She touched many minds and hearts, but whether she did so in the most honest and transparent way remains questionable.”

What? There is nothing questionable about whether Leaphart has been honest and transparent—she hasn’t. Ravitz documents her deceptions impressively. She lied about her cancer treatment. She lied about her eligibility for Medicaid and financial resources. She lied to a documentary team that had arranged to follow her, leading them to end the relationship. She lied on her Facebook page, representing her health travails by using the experiences of a friend. Her unguarded comments suggest that she began the walk as a way to make money for herself as well as research. She accepted contributions under false pretenses.  Yet the journalist still seems to want to say that all of this doesn’t matter,  if some good resulted from it:

In the weeks before publishing this story, I set out to give Paulette a chance to address questions I still had and to respond to accusations made by others. I emailed her twice detailing my reporting and asking for answers about everything from her career and court judgments to her cancer and treatment. When I got no reply, I texted her and even had my editor send her a Facebook message. Then I called her. She indicated she had seen my questions and told me she didn’t want to talk to me.Soon after my first email, Paulette thanked Jesus on Facebook for her “brand spanking new house” and shared a photograph of the home.”I obeyed him,” she said of God, “even when the devil was riding my back.”

Days before we published this story, Paulette took to Facebook Live and said that about 25 years ago, after multiple suicide attempts and a nervous breakdown, she was diagnosed with dissociative identity disorder, formerly called multiple personality disorder. She said 10 years of therapy helped her integrate more than 20 personalities. She said she was going public with this after reading about the movie “Split,” by M. Night Shyamalan. Once more, I felt for her — and wished I could know what to believe.

After reading Ravitz’s own story, I think we know what to believe, so it’s bizarre that she doesn’t  Disassociative personality disorder is extremely rare, and some experts even doubt that it is real.  It is also one of the great last ditch excuses of all time. Which personality lied on Facebook, Paulette? Is Leaphart’s next stunt going to be a long walk split up among 20 personalities? The woman has no credibility, and can’t be trusted. She had a double mastectomy and she walked to Washington, D.C. Beyond that, nothing is certain.

For Ravitz to even suggest that the benefits of Leaphart’s conduct outweigh her dishonesty shows how insulated from core ethical principles her profession has become. No wonder Dan Rather thought using a forged document as evidence was acceptable journalism. This was Lance Armstrong’s defense too: his cheating to win races helped his foundation raise money for cancer research, so it was all right! This was Harry Reid’s despicable justification for spreading lies about Mitt Romney. “He lost, didn’t he?” Once we decide as a culture that lies are ethical tools in pursuit of a worthy goal, all is lost. Human beings can ratioanalize anything into seeming like into a worthy goal. One worthy, then that goal can justify terrible conduct. This is The Saint’s Excuse: “It’s for a good cause.”

Paulette Leaphart’s deceptions to make her stunt sufficiently inspiring, newsworthy and profitable are arguably even worse than Rather’s. She will make the public more cynical, and less likely to trust victims who don’t embellish their stories. Scamsters like her kill compassion, leaving coldness, suspicion and doubt. They make society a crueler place. I’m sure fear of this explains the schizophrenic nature of Ravitz’s report, as she both documents Leaphart’s misrepresentations and shrinks from the task of rendering the obvious verdict.

Or perhaps she really does believe the ends justify the means.

14 thoughts on “From The Ethics Alarms “Do The Ends Justify The Means?” Files: The Breast Cancer Survivor’s Inspiring Scam”