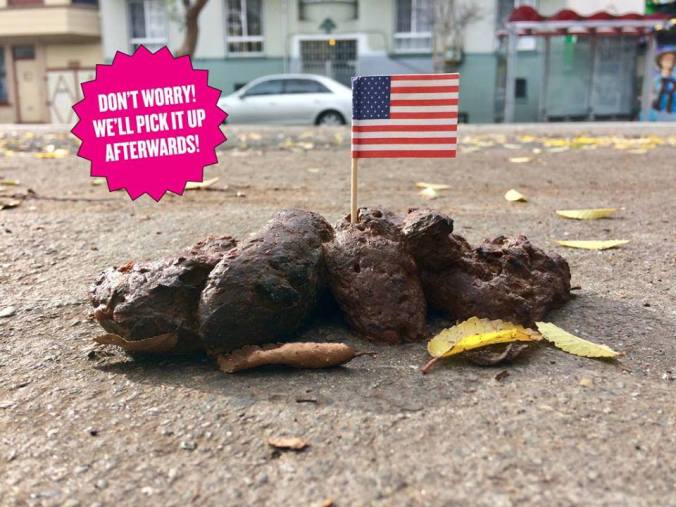 I’d like to take a national poll, a California state poll and a San Francisco poll asking who thinks deliberately littering the site of a planned far-right demonstration with dog shit is an ethical thing to do. I think it would tell us a lot.

Patriot Prayer, a far right group that has held several  “free speech” events in the Pacific Northwest, applied for and was awarded a permit to hold a demonstration today on San Francisco’s Crissy Field.  San Francisco’s officials, being totalitarians at heart and like their increasingly senile but steadily anti-speech member of Congress, Nancy Pelosi, hostile to the concept of free speech, tried to pressure the National Park Service to deny the group a permit. The Service, foolishly hewing to the Constitution, demurred. The city’s police department  planned for a riot.

To foil the demonstrators, an artist named (yes, I checked this one for being a hoax) “Tuffy Tuffington,” had a brainstorm, or perhaps shit-storm is the better description:  to make the beach uninhabitable for Patriot Prayer First Amendment protected proceedings, he urged San Franciscans to plan to festoon Crissy Field, which is normally a lovely beach by the shadow of the Golden Gate Bridge, with piles of their various dogs’ droppings

“I just had this image of alt-right people stomping around in the poop,” said Tuffy, a self-righteous asshole. He is convinced that this is the best way to respond to right wing extremists in the wake of Charlottesville.  Presumably, President Trump will be required under threat of impeachment to declare that there is nothing wrong with defiling a public place and breaking the law to make it impossible for a group to demonstrate, because it is a false moral equivalency to insist that all Americans have equal access to Constitutional speech. Do I have that correct, Tuffy?

“It seemed like a little bit of civil disobedience where we didn’t have to engage with them face to face,” the Shit-Master said.

To that end, Tuffington, a 45-year-old artist and designer (I already pointed out that he’s an asshole, right?) , created today’s featured Facebook event page,  and the dog owners of San Francisco responded in packs, declaring their intention to stockpile their dogs’ output for days in advance, then deliver them in bags to the beach. Tuffy’s followers were also planning to reconvene on Sunday to “clean up the mess and hug each other,” as one would expect from Good Progressives.

I shouldn’t have to explain in too much detail why making the scene of a planned protest unfit for human beings is unethical, regardless of who is demonstrating, so I won’t. Using dog poop to do this is no different in principle from using broken bottles, tarantulas, black mamba snakes, killer bees, mega-decibel Lawrence Welk music, or toxic waste. Tuffy and his budding totalitarians from the Left have convinced themselves that they and only they know who deserves the right of protected and unfettered speech, so they feel free to ignore the Golden Rule (Their version: “Do Unto Others As They deserve To have Done to Them Because They Are Others, And Not You”), defy Kantian principles (if everyone did this to those whose speech they disagreed with, there would be no free speech), and warp utilitarianism (no, the end of silencing adversaries does not justify the means of destroying access to speech, expression and assembly.)

Patriot Prayer cancelled the rally yesterday, so I’m sure Tuffy’ and his poop brigade are taking a victory lap, though there are many reasons why the group may have been intimidated out of holding its event.

People like Tuffy, even ones not named Tuffy, are the real danger to the nation. Patriot Prayer and its ilk are just an annoyance. Evelyn Beatrice Hall correctly summed up Voltaire’s attitude toward free speech as “I disapprove of what you say, but I will defend to the death your right to say it.”  Today’s liberals do not accept the ideals of the famous French philosopher’s gadfly, which is why they are not really liberals, and why they pose a threat to democracy and free thought. Here is the Ethics Alarms version of Hall’s Voltaire Creed:

“I disapprove of what you say, but I will defend to the death your right to not have to say it standing in dog shit.”

Pointer and Source: The Guardian

12 thoughts on “From “The Progressive War On Free Speech” Files, The Unethical Website Of The Month: “Leave Your Dog Poop On Crissy Field””