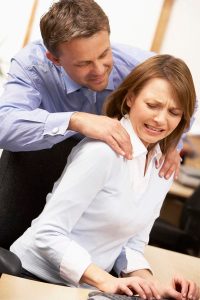 (Now this is why companies and organizations that want to avoid sexual harassment problems need effective training sessions, ideally run by me.)

Tavis Smiley, the PBS talk show host suspended from the network and currently in the process of being erased from the culture due to allegations of sexual harassment, was asked by Tucker Carlson on the latter’s Fox News show about the propriety of a supervisor having sexual relationships with subordinates in the workplace. Smiley responded with this jaw dropper:

I certainly understand that there are persons who believe that there is no such thing as a consensual relationship in the workplace. I hear that. I can respect that point of view. But there are other opinions on this. In my employee handbook we do not encourage interoffice relationships but we don’t forbid it either because I don’t know how things are going to turn out in your life and you start hanging out with our company. I don’t know who you’re going to meet. And let’s face it, nobody’s working 40-hour weeks anymore. We are working 40-, 50-, 70-, 80-hour weeks. Where else are you going to meet people in this business?

His answer was self-indicting, deceitful, ignorant, stupid, and redolent of rationalizations.

Carlson didn’t ask about “consensual relationships in the workplace.” He asked about whether relationships between women and the men who have the power to fire them, promote them, give them raises or make their working lives a living hell are appropriate. The answer is no. Of course no. Nor can they possibly be called consensual. Quite apart from that aspect, such relationships, even if they are initiated by the subordinate, constitute per se unethical management. They undermine morale. They undermine respect for and the authority of the manager. They create suspicion and distrust of the staffer. They create a hostile work environment for all the women in that workplace. destroy staffs and organizations. They are the organizational equivalents of incest. They are wrong. Always. This isn’t a new discovery either. It should be obvious.

“Where else are you going to meet people in this business?” Well gee, Tavis, it sounds like you have a choice to make. You can earn your big money and pursue your profession and its goals, or you can use the workplace as a dating bar or your personal harem. You can’t do both. Sorry. You have to avoid the temptation of hitting on those who report to you, and if they hit on you, you have to be sufficiently mature and professional to tell them that as their superior, you don’t have relationships with staff. Many, many leaders and managers muster the character and self-control to do this. (The technical term for them is “ethical.” Look it up.)  If you can’t follow their model, I suggest that you work at home.

For the record, here, from the Ethics Alarms list, are the rationalizations…all 20 of them… your juvenile question evokes:

Read them, study them, internalize them, and perhaps then you will be trustworthy as a supervisor, manager or leader because you will finally have functioning workplace ethics alarms.  Right now, you clearly aren’t, and don’t.

In the alternative, you could grow up.