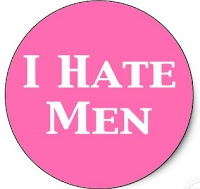 Apparently we can’t have mutual respect, equality, fairness and opportunity. There has to be a boot on someone’s throat, hate, envy, anger, payback, pecking orders, groveling and discrimination. The inevitable result of all that is backlash, and when it comes, it’s earned.

The most recent wretched example of this discouraging state of the culture is the escalation of anti-male, feminist chauvinism, though the trend has been building for a long time. Hillary Clinton’s primary argument for electing her President was that she had two X chromosomes, and anything else was a bonus. Long before that, Christiane Amanpour led a despicably sexist panel one memorable Sunday morning  in which she and three other women discussed how women are obviously better than men when it comes to leadership, management, decision-making, and conflict resolution.

I wrote at the time, when I was able to force my mouth to close from the rictus of horror it had been frozen into by this open display of bigotry:

The sweeping generalities, stereotyping, and flat pronouncements of male inferiority were unrestrained. “Women run for office to do something and men run for office to be somebody,” said Amanpour at one point, summarizing an exchange. “There’s something about a group of men and testosterone, you know, making risky decisions ,” said Claire Shipman, an ABC correspondent kindly given the chance to peddle her nauseatingly-titled new book, “Womenomics.”  Shipman spouted various unidentified studies purportedly showing that women in power achieved uniformly better results than those bumbling male counterparts: better hedge fund profits, better corporate performance, pretty much better everything.

If a male pundit properly chided this hypocritical junk—I didn’t encounter any—he was obviously a conservative Cro-Magnon pig.  It has only gotten worse since then. Though no one will admit it, the Democratic Party is already committed to nominating a woman for President in 2020 no matter what, despite the fact that the likely choices of double exxes are inexperienced, shrill, old, obnoxious, or none-too-bright…or Hillary. Never mind: they’re women. They’re better.

There’s a TV ad that has been coming on for some time now. A narrator tells us that “women are awesome” and how special they are. It’s juvenile and blatant chauvinism: a similar ad about how whites are awesome or men are awesome would be so politically incorrect that it would probably be stopped mid-play by antifa vigilantes. No wonder so many boys are deciding that they want to be girls. Who wouldn’t rather be awesome?

How this kind of offensive square peg of anti-male, pro-female propaganda got squeezed into  the round hole of “liberalism” is a mystery, but the ethics alarms of the news media appear to be dead to it.  Here, for example, is an op-ed published last week in that liberal news icon, the Washington Post. The author is professional bigot and college student indoctrinator Suzanna Danuta Walters, Professor of Sociology and director of the Women’s, Gender, and Sexuality Studies Program at Northeastern University.Why would this pure misandry be deemed appropriate for publication anywhere? I don’t know. You tell me:

So men, if you really are #WithUs and would like us to not hate you for all the millennia of woe you have produced and benefited from, start with this: Lean out so we can actually just stand up without being beaten down. Pledge to vote for feminist women only. Don’t run for office. Don’t be in charge of anything. Step away from the power. We got this. And please know that your crocodile tears won’t be wiped away by us anymore. We have every right to hate you. You have done us wrong. #BecausePatriarchy. It is long past time to play hard for Team Feminism. And win.

My reaction to this insulting, simple-minded bile is to do my best Robert De Niro impression, and suspect that most non-weenies who haven’t been branded on the cheek by the Progressive Collective are likely to react in kind. My warning: keep it up. Keep it up, Feminists. I dare you. Men are awesome too, you know.

You see,  either bigotry, chauvenism, prejudice and hate are innately and objectively wrong—you know, unethical–or they aren’t. They can’t be unethical for one gender and not for the other. If women want me to accept them and treat them as individuals and equals, they are not going to achieve that goal by behaving like this. They are going to achieve a backlash, and they will have no one to blame but themselves.

The anti-male rhetoric and conduct of the feminist bigots isn’t just unthical, of course.

It is also really, really stupid.

74 thoughts on “Women Of America: PLEASE Don’t Make Me An Anti-Feminist By Talking Like Anti-Male Bigots!”