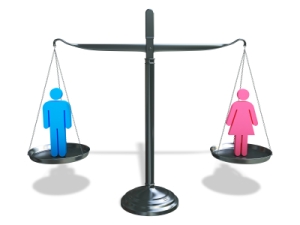 Christiane Amanpour just led a jaw-dropping roundtable discussion on her ABC Sunday morning talk show, “This Week with Christiane Amanpour,”as three female guest commentators ( Torie Clarke, the former assistant secretary of defense for public affairs in the Bush administration: Cecilia Attias, the former first lady of France and founder of Cecilia Attias Foundation for Women, and ABC’s Claire Shipman)
and Christiane discussed how the convergence of  Former IMF director Dominique Strauss-Kahn’s attempted rape charges and Rep. Anthony Weiner’s travails has created a possible tipping point, in which the nation will finally come to the realization of a fact that these women have known all along: women are just plain better than men when it comes to leadership, management, decision-making, and conflict resolution.

The sweeping generalities, stereotyping, and flat pronouncements of male inferiority were unrestrained. “Women run for office to do something and men run for office to be somebody,” said Amanpour at one point, summarizing an exchange. “There’s something about a group of men and testosterone, you know, making risky decisions ,” said Claire Shipman, an ABC correspondent kindly given the chance to peddle her nauseatingly-titled new book, “Womenomics.”  Shipman spouted various unidentified studies purportedly showing that women in power achieved uniformly better results than those bumbling male counterparts: better hedge fund profits, better corporate performance, pretty much better everything. “Very often, men will compete for the sake of competition. It almost doesn’t even matter what happens,” Clarke declared, to no objections or qualifications from the assembled experts of the Superior Sex. “Men aren’t attracted to powerful women,” added Amanpour.

The male-bashing and female-worship went on for fifteen minutes, with no hint of restraint or irony. The  political right’s favorite tactic to show news media bias is to rhetorically ask how differently the media would handle a scandal or other news story if the political affiliations of the parties were reversed. That tactic is  often abused; frequently the answer is, “they would report it exactly the same way.” Not here. An all-male panel smugly talking about how “Estrogen really is a problem” and how decisions made in the throes of PMS are inherently untrustworthy would guarantee a feminist march on ABC headquarters, blogger and op-ed fury, NOW declarations of war and the rolling of network heads.

When he was president of Harvard, Lawrence Summers was run out of his job by faculty and feminist fury when he suggested that it was possible that differences between the genders might be part of the explanation for the under-representation of women in the worlds of science and mathematics. Yet I just watched the host of a mainstream news program aggressively participate in a stacked and rigged discussion that began with the unchallenged presumption that men—not just Weiner, or Dominique Strauss-Kahn, or some men, or many men, but men as a monolithic, homogenous, stereotyped group—-are fatally handicapped by their hormones and brain-wiring when it comes to leadership and management.

What a brilliant strategy: make a case that justifies anti-male bigotry and bias in hiring that is politically and socially impossible to rebut! Is that the way it is going to be, girls? Or will the gender warriors play fair, and now allow the presentation of other studies, suggesting what women, as a group, don’t do as well as men, and panel discussions about the benefits of testosterone? And can Larry Summers have his job back? Oh, right: the president of Harvard is now a women. Imagine that.

Amanpour’s roundtable was as biased, bigoted, unfair and offensive as a guest expounding, as poor L.A. Dodger exec Al Campanis did in 1987 on ABC’s “Nightline,”  on how African-Americans just don’t have “the necessities” to be major league baseball managers. Campanis lost his job and became the face of racism in sports, but Amanpour and her group made exactly the same kind of statements about men, supremely confident that it isn’t bigotry and stereotyping that gets you in trouble, but the wrong type of bigotry and stereotyping.

Well, she might get away with it, and women undoubtedly enjoy being pronounced superior in some respects without having to accept or tolerate the burden of being inferior in others. Nevertheless, this blatant double standard is neither fair nor factual, and giving it such an unbridled airing on a Sunday morning public policy TV program is indefensible.

I would be satisfied to see the relative assets and deficits conferred by gender differences—and racial differences— be openly discussed and evaluated, if that could be done without leading to discrimination against individuals based on perceived or demonstrated group characteristics…and I have my doubts. If, however, women are going to cry bloody murder at the barest suggestion that female traits and characteristics include handicaps and well as benefits, while simultaneously denigrating men as unreasoning, egomaniacal, sex-obsessed brutes, that is not acceptable, or ethical, or fair.  I expect them to play by the same rules they insist upon when they are the topic of discussion. And if Christiane Amanpour is going to assemble a roundtable with guests who pronounce men unquestionably inferior, she has a journalistic obligation to include some credible opposition, even if it is only some dumb, testosterone-addled, overly competitive male.

You can read the transcript here.