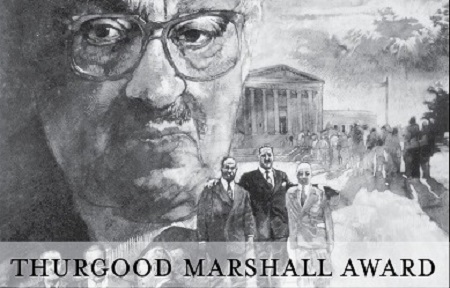 Res Ipsa Loquitur: The American Bar Association  Section on Civil Rights and Social Justice will bestow the prestigious Thurgood Marshall Award on former Obama U.S. Attorney General Eric Holder during the ABA Annual Meeting in Chicago on August 4. It has been obvious for a long time, but if anyone needed any further evidence that the ABA is now a full-fledged partisan left-wing organization masquerading as an objective professional association, this is it. Holder wasn’t just a bad AG, he was a political one in what is supposed to be a non-political office. He was also racialist, and obviously so, regularly coordinating with Al Sharpton and his followers, and constructing a Civil Rights division that adopted the position that only whites could engage in civil rights violations.

Holder should have disqualified himself from any professional awards, not to mention his high office in the Obama Administration, when he gave the green light to President  Clinton’s  infamous pardon of Democratic donor Marc Rich (aka. Clinton’s quid pro quo for his ex-wife’s  fat donation to his Presidential library). In fact, it was a defining moment, and having defined himself as a partisan lackey, Holder was exactly what President Obama wanted at Justice. Holder intervened in the Trayvon Martin case to signal it as a race-related crime in the absence of any evidence, and did likewise in the Michael Brown shooting, lighting the fuse of racial distrust and community anger at police. Then he called the United States a “nation of cowards” regarding race relations. The real coward was Holder, who used his race—he was the first black Attorney General—to shield himself from the accountability and criticism his mishandling of his office deserved.

Holder was held in contempt of Congress—and allowed the captive news media to call the action “racist”—after he withheld documents and key witnesses from oversight committees looking at several scandals in which his Justice Department was complicit. Notable among them was the “Fast and Furious” fiasco in which the government allowed Mexican drug gangs to get high-powered weapons, one of which ended up killing an American. Holder actively misled Congress in testimony under oath.ore than once.  He sought significant reductions in privacy and due process protections for citizens—civil rights? Hello, ABA?— and personally announced and supported Obama’s “kill list” policy, in which the President asserted the right to kill any U.S. citizen on his sole authority without a charge or due process.  Holder let his  department apply the controversial Espionage Act of 1917 to bring twice the number of such prosecutions under the Act that had occurred under all previous Attorneys General.  He led the Obama Administration in a campaign against government whistle-blowers. Holder championed warrantless surveillance (Civil rights? Hello?). Most damning of all given the title of his upcoming award, Holder was personally involved in targeting journalists for surveillance and  was the leader of an Obama administration attack on the news media that was condemned by many public interest and media groups. Holder’s Justice Department seized phone records for reporters and editors  at three Associated Press offices as well as its office in the House of Representatives. Under oath, Holder later claimed to know nothing about any of it.

“Holder’s “contributions” cost civil liberties dearly in this country. If the ABA is to give him this award, it could at least spare civil libertarians and journalists the reference to civil liberties.”

Note: You can read the various Ethics Alarms documentation of Holder unethical words and conduct here.

This one is probably my favorite, from 2014.