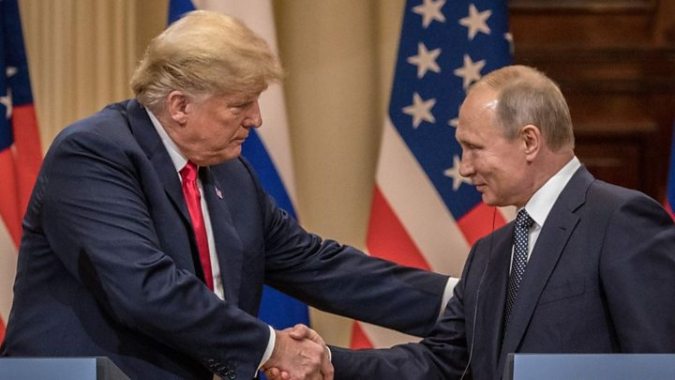 What I do occasionally do is look for someone with judgment, experience and honesty I trust whose assessment of a particular situation jibes with my ethical analysis at times when I have begun to judge my own sanity. When I started reading people writing, in horror-stricken tones,”Can you believe what Trump said at that joint press conference?,” which I initially missed because these events are always stagey, insincere, all-puffery affairs, I assumed that President Trump finally done something really over-the-top this time, like spitting at CNN reporter, or singing “The Volga Boatman” to irritate Putin. When I read what he in fact did say, and saw the videos, my brain literally couldn’t reconcile it with the hysterical claims that it was “treasonous,” or like “Pearl Harbor,” or “Kristallnacht” or warranted impeachment (Plan N). It didn’t compute, as the robot in “Lost in Space” used to say.

I know I don’t often seem like it, but I have my doubts sometimes. I write as if I am certain I am right, because that’s my style, but often within me there meet a combination of antithetical elements which are at eternal war with one another. Driven hither by objective influences — thither by subjective emotions — wafted one moment into blazing day, by mocking hope — plunged the next into the Cimmerian darkness of tangible despair, I am but a living ganglion of irreconcilable antagonisms. All right, that was from my favorite exchange in “H.M.S. Pinafore,” but I’m not completely facetious. When I read almost every one of hundreds of Facebook friends writing, to universal agreement from their echo ch..freinds, that an extemporaneous statement in a Finnish press conference proves that Putin “has something” on the President, I begin to think, since I don’t see it at all, that the problem must be me. I am so thoroughly sick and disgusted at the relentless unethical and unprecedented efforts to interfere with this President, and his efforts to do the job he was elected to do, by Democrats, progressives, “the resistance” NeverTrumpers and the news media, that maybe my indignation against their dangerous, democratic institution-eroding vengeance because this odd and offensive man shattered the dreams of the Obama Worshipers and the Clinton Conned, had finally metastasized into bias, and made me impervious to something that should have me, for once, agreeing with them. For bias makes us all stupid, you know.

That is why I was so relieved to read this, the transcript of the comments of NYU Russia expert Stephen F. Cohen, a contributing editor at “The Nation,” the most extreme leftist magazine of national prominence in the country. He is clearly NOT being driven by bias, but his analysis was exactly the same as mine:

“The reaction by most of the media, by the Democrats, by the anti-Trump people is like mob violence. I’ve never seen anything like it in my life. This is the president of the United States, doing what every president… since FDR in 1943 with Stalin, meeting with the head of the Kremlin. And every president since Eisenhower, a Republican by the way, has met with the leader of the Kremlin for one existential purpose: To avoid war between the two nuclear superpowers. Today, in my considered, scholarly, long-time judgment, relations between the U.S. and Russia are more dangerous than they have ever — let me repeat, ever — been, including the Cuban missile crisis. I want my president to do — I didn’t vote for this president– but I want my president to do what every other president has done. Sit with the head of the other nuclear superpower and walk back the conflicts that could lead to war, whether they be in Syria, Ukraine, in the Baltic nations, in these accusations of cyber attacks. Every president has been encouraged to do that an applauded by both parties. Not Trump. Look what they did to him today. They had a kangaroo court. They found him guilty. And then you had the former head of the U.S. CIA, who himself ought to be put under oath and asked about his role in inventing Russiagate, calling the President of the United States treasonous. What have we come to in this country? And what is going to happen in the future?”

Whew! What a relief: I thought I was going crazy. Like Cohen, except not close to matching his scholarly efforts, I know quite a bit about how past Presidents treated Russian leaders in their various summits, meetings and diplomatic encounters. Only Trump was expected to insult the Russian leader to his face. Only Trump was asked an outrageous question inviting him to insult a Russian leader to his face. (The reporter should have been ejected from the conference.) President Trump was not only criticized for behaving as every other President has and should have behaved, but was excoriated for doing so.

I wish, of course, that the President’s rhetorical skills were not so blunt and confounding, so he could defend his own conduct without resorting to “fake new!” retorts. I wish he had the nuance and sense to simply dodge such a disruptive and irresponsible question without walking into a true “when did you stop beating your wife” question that made him choose between undermining U.S. intelligence or undermining the whole reason he was at the summit in the first place. I wish that the President was not so much like Donald Trump, in other words, but unlike Anderson Cooper, George Will, Chuck Schumer, John McCain and my hysterical Facebook Friends, I regard constantly becoming more and more irrational over something that happened 19 months ago  to be civic incompetence.

Some other commentary has helped assuage my doubts. One blogger recalled what America-hater Noam Chomsky, one of my all-time least favorite people, said on NPR’s “Democracy Now!” last year regarding the obsession with “Russian interference”:

It’s a pretty remarkable fact that—first of all, it is a joke. Half the world is cracking up in laughter. The United States doesn’t just interfere in elections. It overthrows governments it doesn’t like, institutes military dictatorships. Simply in the case of Russia alone—it’s the least of it—the U.S. government, under Clinton, intervened quite blatantly and openly, then tried to conceal it, to get their man Yeltsin in, in all sorts of ways. So, this, as I say, it’s considered—it’s turning the United States, again, into a laughingstock in the world.

So why are the Democrats focusing on this? In fact, why are they focusing so much attention on the one element of Trump’s programs which is fairly reasonable, the one ray of light in this gloom: trying to reduce tensions with Russia? That’s—the tensions on the Russian border are extremely serious. They could escalate to a major terminal war. Efforts to try to reduce them should be welcomed. Just a couple of days ago, the former U.S. ambassador to Russia, Jack Matlock, came out and said he just can’t believe that so much attention is being paid to apparent efforts by the incoming administration to establish connections with Russia. He said, “Sure, that’s just what they ought to be doing… yeah, maybe the Russians tried to interfere in the election. That’s not a major issue. Maybe the people in the Trump campaign were talking to the Russians. Well, OK, not a major point, certainly less than is being done constantly. And it is a kind of a paradox, I think, that the one issue that seems to inflame the Democratic opposition is the one thing that has some justification and reasonable aspects to it.

Then there was Ann Althouse, who flagged the Cohen statement, and her many readers (far more than mine, alas) , who are far from pro-Trump or overwhelmingly conservative, but  who almost unanimously agree that the attacks on Trump over this reveal new levels of anti-Trump derangement. My favorite comment so far:

“Remember that day when everyone flipped out because President Trump said stupid stuff in a press conference with Vladimir Putin? I was in my fifth grade class when a teacher burst in the room. “The President insulted the CIA” she cried out and we all started to cry.”