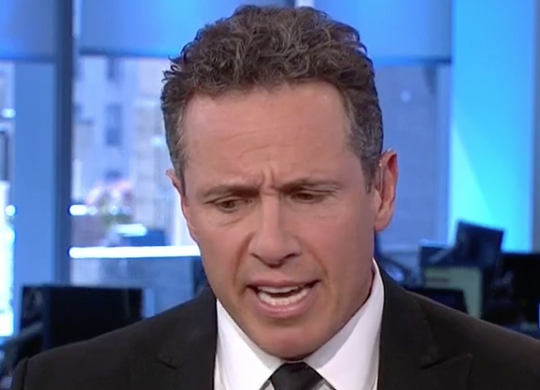 Chris Cuomo  is spewing anti-democractic, anti-free speech, pro-violence garbage on CNN, and none of his colleagues, assuredly not CNN’s fake media watch-dog Brian Stelter or even its once fair and balanced Jake Tapper have shown the integrity to call him on it. Thus, despite my post on the matter, many more voices need to be raised elsewhere lest this irresponsible media demagogue make millions of trusting American almost as dumb as he is.

Here is Glenn Logan’s Comment of the Day on today post, Unethical Quote Of The Month: CNN’s Chris Cuomo:

Re: Cuomo
Cuomo is confusing self-defense and lawlessness. By definition, self-defense is a response to a direct threat or attack. Attacking someone with whom you disagree is never, ever self-defense and cannot be the moral equivalent of it.

“But in the eyes of good and evil, here’s the argument: if you’re a punk that comes to start trouble in a mask and hurt people, you’re not about any virtuous cause. You’re just somebody who’s going to be held to the standard of doing something wrong. But when someone comes to call out bigots and it gets hot, even physical, are they equally wrong as the bigot they are fighting? I argue, no.”

Two questions for Chris: Who gets to define good, and evil? Is he saying the totality of the AntiFa position is good, or just that their hatred of racism is good? We don’t know, because Chris doesn’t tell us. AntiFa stands for many things I think are not good, among them are commitment to violence against those with whom they disagree philosophically, an embrace of destructive leftist anarchy, and a rejection of authority. Is Cuomo willing to pronounce all that good? Or is it just “better than the opposition,” who as it turns out, are on the right side of two of those three things?

Second, who throws the first punch? That’s how you figure out who’s wrong and who’s right. Because instantly, the punchee becomes the defender and the puncher becomes the aggressor and lawbreaker. No matter where you assign moral turpitude, it doesn’t and cannot justify violence in response.

“Fighting against hate matters…Now, how you fight matters too. There’s no question about that. But drawing a moral equivalency between those espousing hate and those fighting it because they both resort to violence emboldens hate, legitimizes hateful belief and elevates what should be stamped out….But fighting hate is right.”

Fighting what hate is right? I hate communism and socialism. Is it okay if I locate me some socialists and bash their brains out on the sidewalk? I hate anti-Semites, and I’m not even a Jew. Does that mean I can crack me a few Skinhead skulls and be on the moral side of good?

Of course, no, because lawlessness is worse than “hate” (whatever that is, I assume racism). Hate doesn’t leave bodies in its wake, but lawlessness does. Some would argue that the KKK lynched blacks because of hate, but truthfully, it was just lawlessness that did the killing, not the hate.

Cuomo is justifying lawlessness because he finds the victims of the lawlessness of AntiFa worthy of their fate, but c’mon, that’s just vigilantism writ small. Is he okay with me knocking off terrorists in subways like a latter-day Charles Bronson?

Look out, Louis Farrakhan, me and my blackjack are on the side of right — Chris Cuomo says so!

38 thoughts on “Comment Of The Day: “Unethical Quote Of The Month: CNN’s Chris Cuomo””