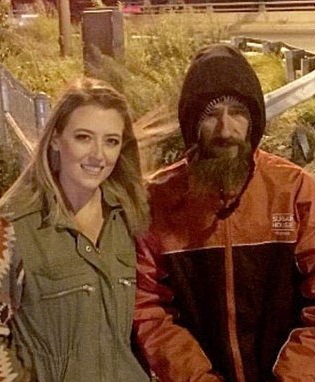 In the November 2017 post titled, An Ethics Hero Epic: Johnny Bobbitt, Jr, Kate McClure, And Americans, Ethics Alarms told the inspiring story of how homeless veteran Johnny Bobbitt gave his last dollar (twenty of them, to be accurate), to stranded motorist Kate McClure of Bordentown, New Jersey, who was driving through Philadelphia to visit a friend when her car ran out of gas in a tough section of the city. In gratitude, McClure started a GoFundMe campaign for her rescuer, writing,

I would like to get him first and last month’s rent at an apartment, a reliable vehicle, and 4-6 months worth of expenses. He is very interested in finding a job, and I believe that with a place to be able to clean up every night and get a good night’s rest, his life can get back to being normal.

When I wrote the post, her campaign had attracted donations totaling almost $380,000.

Makes you want to cry!

Not as much as this does, though…

Johnny is back living under a bridge, panhandling for change. GoFundMe is investigating whether McClure and her live-in boyfriend absconded with most of the donations, which eventually amounted to about $400,000. Johnny claims that his once grateful benefactor and friend have been spending the money that was supposed to ensure, in Kate’s memorable words, that “his life can get back to being normal.”

McClure and boyfriend Mark D’Amico insist they’ve spent half the fundraiser money on housing and other expenses for Bobbitt, but are holding on to the rest until he’ licks his opioid addiction. They told the Philadelphia Inquirer that Bobbit once blew through $25,000 cash in less than two weeks. From his home under a bridge where he huddles with with his homeless brother, Josh, 34, Bobbit has a different perspective. He told reporters that he had been  stuck there since June, when he was kicked out of a camper McClure bought him and set up in her yard. A  neighbor of the McClure and D’Amico said that Bobbitt was “an aggressive presence” who constantly asked for more money. “I just gave you money!” the neighbor recalled hearing D’Amico shout in one argument. Who would have guessed that a homeless man would have difficulty managing money?

Upon reflection, this was predictable, was it not? Homeless people are usually homeless for a reason. The tragic record of lottery winners has shown that people without money don’t usually know what to do when they get a lot of it, and large amounts can be wasted in amazingly brief periods….and most lottery winners, even the poorest, are more stable and responsible than people who live under bridges. McClure’s plan was good-hearted, but naive.

Human history also teaches that money corrupts.  It would not surprise me if Kate, perhaps persuaded by her boyfriend, decided that $400,000 was more than Bobbitt needed or deserved, and that her taking a little bit for her own needs…well, maybe a little more…OK, juuuust a bit more…was fair. She also does not have the right to withhold money from Johnny until he kicks his addiction. That wasn’t part of her GoFundMe appeal. His addiction is none of her business.

Her keeping the money, however, any of it, is fraud. Donors to that GoFundMe page weren’t giving so Kate and D’Amico could go on vacations. They gave it to reward the nice, poor homeless man, under the delusion, all too common in some parts of society (and Congress) that the only difference between poor people and wealthy people is how much money they have.

I hope this once heartwarming story somehow works out to be something other than a multi-party tragedy. My guess is, however, that Kate and her boyfriend will end up in jail, and Bobbitt will end up dead.

The only good outcome may be that substantial numbers of people may learn not to give money to GoFundMe and other on-line fundraising sites, which are breeding grounds for scams.

34 thoughts on “Well, It Was Heart-Warming While It Lasted: The “Ethics Hero Epic” Turns Sour”