Now we know the name of the author of the late, through-the-mists-of-time character assassination attempt on Supreme Court nominee Brett Kavanaugh. Good. Realizing that her anonymous sniper attack wouldn’t be sufficient to accomplish the Democrats’ political objective, she identified herself in an interview with the Washington Post. She is Christine Blasey Ford, like Anita Hill a professor who decided to inject an ancient incident into the solemn process—well, it once was, anyway—of confirming a nominee to the Supreme Court.

The fact that the accusation is no longer anonymous changes some aspects of this latest—is it the most unethical? Probably—twist in the Kavanaugh Ethics Train Wreck saga so far. From the second the desperate Sen. Diane Feinstein—desperate to defeat a qualified conservative judge, desperate to bolster her standing with a California progressive base that finds her too moderate—released Ford’s allegation, it could be tagged “unethical” in five ways:

1 The accusation was anonymous, and thus could not be fairly confronted by the accused. UNFAIR.

2. The accusation was over 30 years old, meaning that all aspects of it, including the recollections of the alleged participants, would be inherently untrustworthy. This is why we have statutes of limitations. UNFAIR, and IRRESPONSIBLE.

3. The accusation was, and still is, unsubstantiated by anyone else. UNFAIR, and IRRESPONSIBLE.

4. The accusation was made against a distinguished public servant and family man with no documented blemishes on his record or character as an adult, stemming from an alleged incident that occurred, if it occurred, while he was a minor. UNFAIR

5. No complaint had been made against Kavanaugh by the accuser at any time in the intervening years, until his nomination by President Trump became a political rallying point for the Left. IRRESPONSIBLE.

Now there are only four. One would be too many. The accusation should not have been made, and should not have been made public. This is a simple Golden Rule equation: what innocent human being would want to be the target of an unprovable accusation like this, at a moment when a significant career advancing opportunity was in the balance? We must begin with the assumption that Kavanaugh is indeed innocent, because there is no substantiated evidence that he is not, and because as an adult, which is what matters now, he is innocent.

Do I believe Kavanaugh, who has unequivocally denied that the incident occurred? I have no reason or justification to believe or disbelieve him, and neither does anyone else. However, I would regard the incident as irrelevant to his confirmation even if he agreed that it happened. Would a report of such an incident when he was applying for bar membership be treated as sufficient proof of bad character to cause his application to be rejected? Absolutely not,  not in any jurisdiction in the nation. Would such conduct as a minor cause any adult with an impeccable record since high school to be rejected for any job or post? Are high school indiscretions that do not involve criminal prosecutions ever deemed relevant to adult employment? Never. (Well, hardly ever.)

Do I believe Ford? I have no reason or justification to believe or disbelieve her. There are several good reasons, however, to be skeptical. If this happened, and was so serious that it warrants raising now, why did she never mention it to anyone—not a friend, not a family member—for over thirty years? When she did mention the episode, in 2012, her assailant wasn’t identified, making the fact that she talked about it worthless as evidence that the alleged assault involved Kavanaugh. I can honestly say that as keen a recollection as I have of many high school incidents in my past, it is likely that the details have become garbled in my mind. There are too many ways that Ford could be mistaken. Those who believe Ford’s account, in the absence of a single confirming witness, do so out of pure confirmation bias: they want the story to be true, so they believe it is.

Anita Hill’s unverified accusation against Clarence Thomas during his confirmation was unethical, and Ford’s accusation is worse. It is even older, and it does not involve professional or even adult conduct, as Thomas’s alleged sexual harassment did. Thomas rescued himself by playing the race card (“a high-tech lynching”), an option Kavanaugh does not have at his disposal. If Brett Kavanaugh is rejected by the Democratic Party’s employment of this ugly tactic, then we can be sure that every male candidate from either party will be at perpetual risk of an unsubstantiated accusation of some kind of sexual misconduct, no matter how ancient, speculative, or juvenile.  How ugly is this tactic and Democratic manipulation of it, you ask? A current meme on the web: 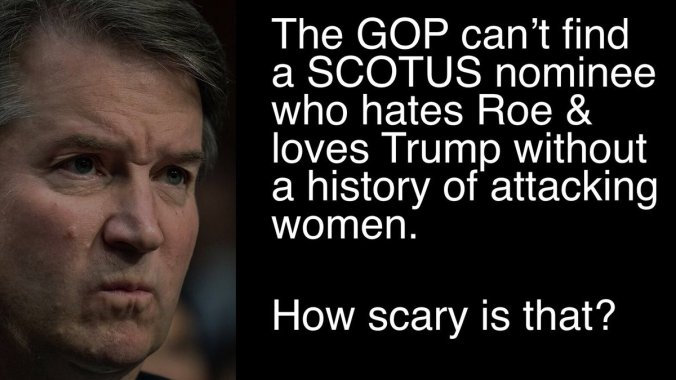 Nice. All it takes to be tarred as someone with “a history of attacking women” is a single, politically-motivated, unsubstantiated accusation of teenage misconduct.

That alone is sufficient reason for the Senate to confirm him, and to resoundingly reject “the ends justify the means” for the Golden Rule.