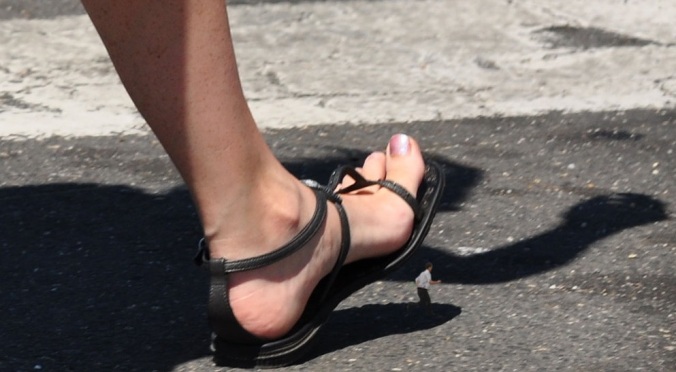 I had pretty much concluded that Christine Blasey Ford was contemptible based on her willingness to impugn a public servant’s integrity, derail what should be an orderly and fair political process, and manipulate the U.S. Supreme Court’s membership using a three decades old allegation that involved, at worst, teenage misconduct. She did this with full knowledge of how #MeToo has unjustly harmed other men simply by raising unprovable rumors and characterizations. In fact, it seems clear that she chose her course of action knowing that she could harm Brett Kavanaugh the same way. If the allegation was politically motivated, as I strongly suspect it was, she is unethical and despicable. If the motive was late vengeance for a teenager’s indiscretion, she is unethical and despicable.

Imagine someone you may have harmed when you were an immature teen. That individual never calls you to account, privately or officially. She never urges you to apologize, accept responsibility, or make amends, or gives you an opportunity to do so. No, she maintains the grievance in escrow, to bring it out years or decades later when the accusation will not only do the most damage, but will also be impossible to defend against. What a cruel, horrible, inhuman way to treat anyone.

First Ford attempted to harm Kavanaugh anonymously. Then, when that wasn’t going to work, she announced her accusation in the news media.

What is being ignored by all those rationalizing Ford’s actions is that that the harm to alleged wrongdoers is magnified and multiplied the longer a victim delays calling for accountability. If Kavanaugh did what he is alleged to have done, he should still have the right to deal with the consequences, accept punishment if any, and be able to get on with his life, set a straight course, and prove his character and values as an adult. Wouldn’t anyone want that opportunity? Shouldn’t any 17-year-old miscreant have that opportunity? As I have already noted, Ford’s conduct is an anti-Golden Rule monstrosity.

It also creates the equivalent of ethics toxic waste. In a just society, nobody is pronounced guilty until guilt is proven, and nobody is publicly accused unless the offense is provable.  A prosecutor who knows that there isn’t evidence to convict someone of an offense is violating prosecutoral ethics to bring charges. Ethically, the principles follow. If you cannot prove an accusation, if all you have is your word and nothing else, if there is no chance that any evidence will arise that supports your version of events, you must be, at very least, absolutely certain that you are correct. Ford cannot be 100% certain. Not after more than 30 years, and especially after a long period in which she says she had forgotten about the alleged episode. There are many, many memorable episodes in my life, and I have always had a remarkable memory for events I witnessed or took part in. Such memories, however, shift and blur over time. No 30 year-old memory is 100% reliable, and because we, well, those of us who are fair and honest, know that is true, no 30-year memory should be employed as a weapon or personal destruction. Ford’s memory is both destructive and impossible to defend against exactly because it is so old.

Now, however, whatever doubts I had  been erased by Ford’s “demand” that the FBI investigate her claims before she will testify before the Committee. So even the also-unethical precedent created by Anita Hill isn’t sufficient for Ford. Now she is attempting to dictate to the U.S. Senate and the President of the United States, using her own testimony, and the chance for Kavanaugh to face his accuser, to extort the Judiciary Committee. There is a rebuttable presumption that she has no intention of testifying, and that her real objective is to assist Democrats in achieving their  partisan goal of delaying Kavanaugh’s confirmation vote until after the Fall elections. There is no downside for her: she is a professor at a Left-dominated institution, and will doubtlessly be lionized as a hero, much as Hill has been. Progressives don’t care whether the alleged incident really happened, or happened as she claims. What matters is stopping the judge’s confirmation.

Progressives, Democrats and women who deny this forfeit any credibility or presumptions of integrity. The FBI investigates crimes, and none is alleged. The facts of 30 year-old cases usually cannot be settled after so many years; that’s why there are statutes of limitations. It’s also why we aren’t completely certain who shot Kennedy, or who the Zodiac killer is. That’s OK though: Ford probably knows this very well. If the hearings are delayed, it’s mission accomplished for her, and probably a book deal.

Ford’s lawyers signaled their client’s game by having the gall to attack the committee for scheduling a hearing on her accusation. “While Dr. Ford’s life was being turned upside down, you and your staff scheduled a public hearing for her to testify at the same table as Judge Kavanaugh in front of two dozen U.S. senators on national television to relive this traumatic and harrowing incident,” they said a letter to Sen. Charles Grassley, the committee chairman.

Her life is being turned upside down? That was her choice.

Today competition arose for Ford  in the “Most Unethical Non-Senator To Board The Brett Kavanaugh Nomination Ethics Train Wreck” pageant. Cristina Miranda King, a former classmate of Ford’s,  decided to grab 15 minutes of undeserved fame by recalling that she “heard” about the incident. Then she issued this Unethical Quote of the Week:

“Christine Blasey Ford was a year or so behind me,” wrote King, who works as a performing arts curator in Mexico City. “I did not know her personally but I remember her. This incident did happen. Many of us heard a buzz about it indirectly with few specific details. However Christine’s vivid recollection should be more than enough for us to truly, deeply know that the accusation is true.”

Stuff you hear about in high school when you don’t know the participants or details is called gossip. It isn’t even hearsay. Do you remember any 30 year old gossip sufficiently vividly that you could state with certainty now that it was true? Why was King’s idiotic statement treated as news? A woman who didn’t know Ford says that she remembered hearing about the incident without details three decades ago, and the fact that Ford has a “vivid recollection”—though she can’t name the year, date or location of the party, who held it, or any party guests who can confirm her story—means that the accusation must be true.

Now 900 more unethical women, all alumnae of the Holton-Arms School, the private school for girls in Bethesda, Maryland Where Christine Met Brett,  signed an open letter, voicing their support for Ford even though they don’t know her. She’s a woman, you see, and of course one who is impugning a man 30 years late, so she must be telling the truth. “Dr. Blasey Ford’s experience is all too consistent with stories we heard and lived while attending Holton,” they write. This convinces me that Holton Arms graduates a lot of bigoted idiots incapable of critical thought. These women have no valid reason to believe or disbelieve Ford with such certainty. Because they know that students have been assaulted at Holton Arms, this means that Ford must have been assaulted by Brett Kavanaugh? I dare anyone to support this “reasoning.” X must be guilty of conduct Y, because other people like X have been guilty of the same conduct.

Unethical women, as far as the eye can see…

174 thoughts on “The Attack Of The Unethical Women”