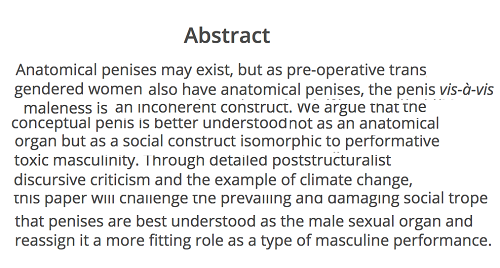 It’s 2:04 am…3:04, really but Daylight Savings Time has fallen…and I can’t sleep. I decided that it must be a guilty conscience for falling so far behind in posting Comments of the Day, so here is one of the more recent ones, Ryan Harkins on the question of whether deliberately fooling academic journals to show how vulnerable they are to  bogus research is ethically defensible. Another COTD will be along on the same post, but this one is by Ryan, on Ethics Quiz: The Good Hoax?:

Other professionals read the articles, and surveys of results are typical to show that there is a body of evidence supporting a particular conclusion. If a bunch of bunk is being passed off as good science, that feeds into further papers and can eventually influence public policy. This is especially true in softer sciences, where results are much murkier than than in the hard sciences, but even the hard sciences suffer from the problem.

The question is, how do you show that there is a problem in the peer review process, and that articles are being discarded because they don’t toe a party line, and articles are being accepted not on their merits but because they do toe the party line? You can’t write a good paper and show bias by having it rejected, because the rejection is supposed to be proof that the paper is bad. But you can deliberately write a bad paper, and if it is accepted, you can call foul because you can show you deliberately put together a bunch of garbage.

Is this ethical? I think it would certainly be ethical if the system were intentionally built so that some people were tasked with creating bogus papers to keep peer-reviewers on their toes. It is sort of like secret shoppers in the service industry. But we don’t currently have this built into the system. Is playing vigilante in this effort unethical, then?

The moral premise in question is that lying is wrong. The ethical application, as mentioned above, is that ends do not justify the means, in that it is not ethically permissible to conduct evil in order that good may follow. But there are other ethical considerations to make. One is the rule of lesser of two evils. If the only choices in front of you are evil choices, then you are obligated to take the lesser of two evils. The classic example is hiding Jews in your home in Nazi Germany, and you’re asked if you have any Jews in your house. Your choices are to lie and say no; tell the true and say yes, or tell a truth in such a way as to deceive. Any of these are not good answers. Lying is wrong, and even telling the truth in a manner meant to deceive is wrong, and betraying people in your care is wrong. In the analysis of the situation, the least wrong option is telling the truth with the intent to deceive.

How does this apply to vigilante paper-writing? There’s a perceived evil, which is the biased publishing of politically-driven junk. There’s the question of one’s responsibility in confronting such an evil. Specifically, is it a worse evil to do nothing at all when one has the power and will to confront that evil? Are there alternatives to fighting this bias other than trying to publish hoax papers? One very daunting problem is that one has great difficulty proving that a good paper was rejected due to bias. One doesn’t have proof that a paper is good unless it passes the peer-review process. So following that path is essentially self-defeating.

The next consideration to make is the difference between writing something false with the intent of convincing people that it is true (as is the case with fake news) and writing something false and never having the intent of it being take as truth. Again, the distinction is much sharper and the ethics much clearer if there is an acknowledged and agreed upon QA/QC process.

So here’s my final analysis. It would be wrong not to challenge academic journals if one believes they are corrupting the peer-review process in favor of publishing party-line papers. It would be wrong to intentionally deceive the publishes and peer-reviewers. It is utterly ineffective to protest that a good paper was rejected due to bias, because the only way to “know” a paper is good is for it to be accepted. Finally, it is ethically acceptable to speak a truth in a deceptive manner if the alternatives are objectively greater evils.

I think the analysis falls just short of being in favor of the people writing the bogus papers. One’s words do not have to be true on the surface to be telling a truth, such as in the case of sarcasm. A paper written so badly that an honest analysis would identify it as objectively false is not an effort to deliberately pass as truth something false, though it is an effort to deceive. It less of an evil than to not confront bias, and it fits into a mold of best practice QA/QC checks that should exist, but currently do not. But a better path potentially exists, in demanding that in academia those specific QA/QC checks be brought into practice. Only once that path has been exhausted would recourse to hoax papers truly be the least of all evils presented.