1.PLEASE stop making me defend Hillary Clinton. In a “controversy” reminiscent of the mainstream media’s hyped and manufactured criticisms of every word. sigh, look or twitch by President Trump, the conservative web is in an uproar over Hillary Clinton’s “snub” or Melania Trump yesterday. Hillary didn’t wave at Melania, you see. She just “nodded” her head. Good Lord, leave the poor woman alone. She’s obviously not well. We know she’s bitter, angry and depressed. Now she and Bill are facing sparse audiences on their ill-advised tour together. So she didn’t greet Donald Trump’s spouse with enthusiasm at a funeral—so what? If she had, everyone would be saying that she’s a hypocrite and a phony. She is, of course, but that’s not the issue.

2. Oh, fine, now I have to defend Natalie Portman… Inexplicably acclaimed actress Natalie Portman apologized to has-been singer/actress/ sex-symbol Jessica Simpson after  Simpson said Portman was slut- shaming her. Portman said in an interview with USA Today that as a teenager she was”confused” by a sexy photo of Simpson “on the cover of a magazine saying ‘I’m a virgin’ while wearing a bikini.” Portman said, “Like, I don’t know what this is trying to tell me as a woman, as a girl.”

This triggered a long rebuke by Simpson on social media:

“I was disappointed this morning when I read that I ‘confused’ you by wearing a bikini in a published photo taken of me when I was still a virgin in 1999. As public figures, we both know our image is not totally in our control at all times, and that the industry we work in often tries to define us and box us in. However, I was taught to be myself and honor the different ways all women express themselves, which is why I believed then – and I believe now – that being sexy in a bikini and being proud of my body are not synonymous with having sex. I have always embraced being a role model to all women to let them know that they can look however they want, wear whatever they want and have sex or not have sex with whomever they want. The power lies within us as individuals. I have made it my practice to not shame other women for their choices. In this era of Time’s Up and all the great work you have done for women, I encourage you to do the same.”

Portman immediately backed down, saying her comments were not meant as a jab toward Simpson, saying, “I would never intend to shame anybody and that was absolutely not my intention. I was really talking about mixed media messages out there for young women and completely apologize for any hurt it may have caused because that was definitely not my intention. What I said was I was confused by mixed messages when I was a young girl growing up, and there are a lot of messages for how women should be, and women should be allowed to do whatever they want.”

The issue Portman raised was and is a legitimate ethics conflict, and should be discussed openly by women, men, and culture.

Here’s a typical Simpson bikini shot—I can’t figure out which one Portman was referring to, but it will do, Pig, it will do… 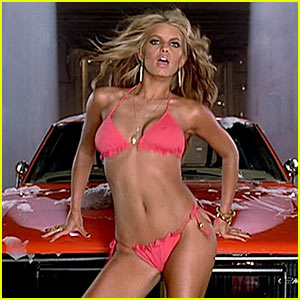 This wasn’t a role in a movie, now. This was how Simpson presented herself to the public. Pairing such a photo with the statement “I’m a virgin” is confusing, to young women and men…and intended to be. It recalls a workplace exchange I recall from decades ago, when a voluptuous but devout young woman who worked for me admonished a male lawyer from another staff for clearly focusing on her breasts, which were accentuated by her garb, including rather workplace inappropriate cleavage. “Hey John, eyes up!” she said sharply.

Bullshit,” he replied. “If you don’t want guys to look at your boobs, why are you dressing like that?”

3. Not the way to encourage whistleblowers….Former FBI contractor Dennis Nathan Cain privately transmitted documents pertaining to the Clinton Foundation and Uranium One to the Justice Department’s inspector general and the Senate and House intelligence committees. His reward was to have his home in Union Bridge, Maryland raided and searched by sixteen FBI agents over a six-hour period.  Cain informed the special agent who led the raid that he was “a recognized protected whistleblower under the Intelligence Community Whistleblower Protection Act,” but to no avail.

Senator Chuck Grassley (R-Iowa) has sent a letter to FBI Director Christopher Wray requesting an explanation about why a recognized whistleblower would be treated this way.

“On November 19, 2018, the Federal Bureau of Investigation (FBI) reportedly raided the home of a former FBI contractor, Mr. Dennis Nathan Cain, who reportedly made disclosures to the Department of Justice Office of the Inspector General in accordance with the Intelligence Community Whistleblower Protection Act (ICWPA),” Grassley wrote in his letter to Wray.

1. Was the FBI aware at the time of the raid that Mr. Cain had made what appeared to be lawful disclosures to the Inspector General? If so, was the FBI aware that these disclosures were passed to the House and Senate Intelligence Committees, per the ICWPA process?

2. Does the FBI consider Mr. Cain’s disclosures to be protected? Please explain.

3. On what basis did the FBI decide to carry out the aforementioned raid on November 19, 2018? Please explain and provide a copy of the warrant and all supporting affidavits.

4. Did the materials seized by the FBI during the raid contain any classified information? If so, was that information classified at the time Mr. Cain brought them to his residence?

Good questions all. The buzz in Conservativeland is that this was a message from the Deep State not to mess with the Clintons. I don’t know what the intent was, but this certainly seems to be counter to the intent of the whistleblower laws.

The immediate ethics question is this: why isn’t the raid being widely covered by the non-conservative news media? Had you heard about it?

4. I will NOT defend Trump Tweets. Gah. The stock market panicked and prices dived after the President tweeted…

….I am a Tariff Man. When people or countries come in to raid the great wealth of our Nation, I want them to pay for the privilege of doing so. It will always be the best way to max out our economic power. We are right now taking in $billions in Tariffs. MAKE AMERICA RICH AGAIN.