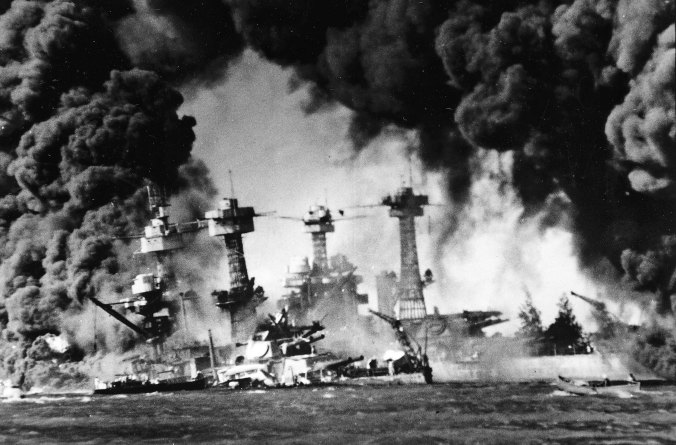 …And a good morning to remember a very bad morning in Hawaii 77 years ago today.

1. Oscar’s latest fiasco. The Academy Awards, which like all awards shows has descended into nasty political advocacy, undermining its mission and alienating its audience, decided to pick famously non-partisan black comedian Kevin Hart, who is also a successful movie actor, to host. His gig lasted just a few day. People looking to discredit him went digging into  his social media posts, and some tweets from eight years ago–you know, before Barack Obama and Hillary Clinton had flipped on gay marriage?—were judged as “homophobic.” In a post on Instagram at about 11 p.m. last night, Hart said he got a call from the Academy of Motion Picture Arts and Sciences and was asked to apologize for his prior tweets, or step down as host. He chose to withdraw, and tweeted this:

“I have made the choice to step down from hosting this year’s Oscar’s….this is because I do not want to be a distraction on a night that should be celebrated by so many amazing talented artists. I sincerely apologize to the LGBTQ community for my insensitive words from my past. ‘m sorry that I hurt people.. I am evolving and want to continue to do so. My goal is to bring people together not tear us apart. Much love & appreciation to the Academy. I hope we can meet again.”

The conservative media is calling Hart another example of political correctness run amuck. That’s ignorant and wrong. To be successful, an MC has to be liked and trusted by his audience, which is, for the Oscars, the people inside the theater above all. A huge percentage, even a half or more, of the Oscar audience is gay. No one can host the Oscars while it is known that he once said, even eight years ago, that he was terrified that his son might grow up to be gay. It doesn’t matter that he may have “evolved.”  Hollywood is a substantially gay community, and the host of its biggest party of the year should neither be nor be suspected of being homophobic,

Why the Academy’s vetters and Hart himself couldn’t figure this out is a different issue: gross incompetence.

2. And now for something REALLY stupid...An Elkhorn, Nebraska grade school principal named Jennifer Sinclair banned candy canes during the Christmas season because she is thinks the J-shape  might be interpreted as promoting Jesus. The Omaha Manchester Elementary School sent parents a list of things she was banning during the weeks leading up to Christmas, noting that their offspring needed to learn to be “inclusive and culturally sensitive to all of our students.”  On the list:

She ended her letter by calling herself, “The (Unintentional) Grinch who stole Christmas (from Manchester), thus violating her own rule about referencing Christmas characters.

Yes, she is an idiot. Happily, the Liberty Counsel, a conservative civil rights group,  sent a cease and desist letter to the school district demanding they reverse this madness. In response, the attorneys representing the school district sent the Liberty Counsel a letter stating the district had “investigated this matter and determined that Principal Sinclair’s memorandum did not comply with Board Policy” adding that the school’s staff was instructed to allow “certain Christmas symbols.”

Jennifer Sinclair was placed on leave, at least for the remainder of the holiday season. Good. She should be fired—not for the letter, but for the hopeless lack of judgment and common sense it demonstrates.

3. And now for something even MORE stupid! The above story indicates the state of our public school system, and this story shows what kind of citizens such a system produces.

Gavin Clarkson told New Mexico’s Las Cruces Sun-News that both a District of Columbia clerk and his supervisor refused to give him a marriage license because they believed that New Mexico is a foreign government. They demanded that he show a proper foreign passport.

This would qualify as an Ethics Alarms KABOOM!, a tale that explodes my head, if I hadn’t lived in or around the District of Columbia so long.

Clarkson eventually was able to explain to both the clerk and the supervisor that New Mexico is a state, and he got his marriage license.

“We understand that a clerk in our Marriage Bureau made a mistake regarding New Mexico’s 106-year history as a state. We very much regret the error and the slight delay it caused a New Mexico resident in applying for a D.C. marriage license.”

But do they regret hiring, employing and paying taxpayer dollars to incompetent, ignorant clowns?

I find it hard to laugh at this.