1 Christmas gift ethics. What’s your opinion of a relative who says that the only thing she wants for Christmas is for family members to donate to her favorite leftist candidate for City Council? I don’t recall the Christmas tradition being “Make people do whatever you would do” Day, do you? Let’s have a Christmas Eve poll!

2. Change: I now believe “the wall” is necessary and the President’s resolve is ethical. My change of heart comes after watching all Democrats and many Republicans simultaneously say they want secure borders and then continue to encourage illegal immigration with their rhetoric and votes. The wall is necessary to send an unequivocal message, which has been Trump’s message since he announced his candidacy: “Come here legally, or don’t come. If you get here by breaking our laws, you are not welcome and will never be welcome, no matter what you do.”

Anti-Trump GOP Senator Bob Corker claims that the showdown over authorization of funding for the Wall is a “made-up fight, so the president can look like he’s fighting, but even if he wins, our borders are going to be insecure.” It’s not a “made-up” fight at all. Republicans have been afraid to upset Hispanic-Americans and Democrats want nice, reliable, left-voting poor folks to swell the voting rolls, so they have sent deliberately mixed messages, particularly regarding the “Dreamers.” If a wall did nothing other than stop “migrant caravans,” it would be worth it.

Trump also promised a wall. Breaking promises is not the same as a lie, unless the promise was a lie when it was made, but Trump, who we have been told lies incessantly, has also been far more determined to fulfill campaign promises than any President within memory. (Obama promised to address the national debt. He promised to have the most transparent administration in history. He promised  that lthe use of chemical weapons by Syria would be the “red line.” He promised to be President of all the people, not just Democratic base demographic groups. He promised that if you like your heath care plan…well, you know the rest.)

It is the Democratic position on the wall that is a sham, because the money involved is a relative pittance. They are grandstanding, and the President is not.

3.  Slot machine ethics. How did I miss this? Three Las Vegas visitors who hit multi-million dollar jackpots playing slot machines are fighting the casinos’ efforts to void the pay-offs on the grounds that the machines “malfunctioned.” The episodes all occurred earlier this year. Unless there is a prominent notice on or around the slots pointing out that there is a limit to the payoff in any single play and specifying what the limit is, I think the casinos are obligated to live with losing whatever one of their evil, manipulative, Skinnerian machines cough up.

This isn’t like a malfunctioning ATM machine. Players are led to believe that whatever comes out when they pull the lever or push the button is theirs. If casinos can say that their machines malfunctioned and they are not responsible for the result, then gamblers should have the same option: “I’m sorry, but my limit on gambling losses was just $500. I shouldn’t be responsible for the additional $10,000 I lost on blackjack, because I malfunctioned.”

4. KABOOM! Well, it will be Christmas without the top of my head, I guess: From the university where I once taught ethics to law students, American University in D.C.:

PLENARY SESSION: THE LANGUAGE STANDARDS THAT KILL OUR STUDENTS: GRADING AIN’T JUST GRADING9:45 AM -11:00 AM
MGC 3-5 Open to all faculty who preregister. This plenary will argue against the use of conventional standards in college courses that grade student writing by single standards. Inoue will discuss the ways that White language supremacy is perpetuated in college classrooms despite the better intentions of faculty, particularly through the practices of grading writing.

(Note: We believe this workshop will be most helpful to Writing Studies faculty, but others are also invited to sign up.)

This interactive workshop will focus on redesigning writing courses’ assessment ecologies in ways that reduce the negative effects of a single standard of writing used in conventional grading practices. It will offer an alternative to such grading practices, labor-based grading contracts, and a comprehensive theory of assessment that may lead participants to other ways of redesigning their courses’ assessments.

Wow. Teaching students to express themselves clearly and competently, and rewquiring them to master speaking and writing in standard English is racist, apparently.

4. Ethics Quote Of The Week: Senator Rand Paul. I’m not and have never been a fan of Rand or his father, but the Senator deserves a salute for directly challenging the bias and hypocrisy of many critics of the President’s troop withdrawal decisions. On Twitter, Paul announced as part of his annual Festivus “declaration of grievances” (if this confuses you, you need to brush up on your “Seinfeld.” Cultural literacy alert!):

“The entire foreign policy establishment of Washington, DC, who two years ago were swearing Trump was going to start multiple nuclear wars. Now they’re mad because he is stopping two wars. How about you just admit you hate the President, love war and have been wrong for the last twenty years on every part of foreign policy?”

Paul elaborated on “Face the Nation.”

5. P.M. Forni. Professor Forni deserves a separate post, but I can’t be sure I’ll get to it, and I don’t want to neglect him. From his obituary in the Times:

P. M. Forni, a professor of early Italian literature who became a leading exponent of civility in our own discourteous times, died on Dec. 1 in Towson, Md. He was 67….

Dr. Forni was a faculty member at Johns Hopkins University in Baltimore when, in 1997, he became the principal founder of the Johns Hopkins Civility Project, which not only examined the importance of civility in human society but also encouraged the practice of it on campuses and in communities through campaigns with bumper stickers, buttons and speaking programs.

Dr. Forni, who directed the project (now known as the Civility Initiative) for many years, also wrote two books on the topic, “Choosing Civility: The Twenty-Five Rules of Considerate Conduct,” published in 2002, and “The Civility Solution: What to Do When People Are Rude” (2010)…

Dr. Forni would remind people that “we have been struggling with these issues for 2,000 years,” Mr. Buccino said by email. “He would also remind us that while there is much civility work still to be done, it was important to note how much progress we have made over the centuries.”

Many things make his death feel personal. I have his book, “Choosing Civility,” and read it. He was right. He  I served on a panel about civility with him. We had a long conversation. He was very friendly and supportive, but then one would expect that from a civility advocate. He was younger than I am, and he died on my birthday, December 1. 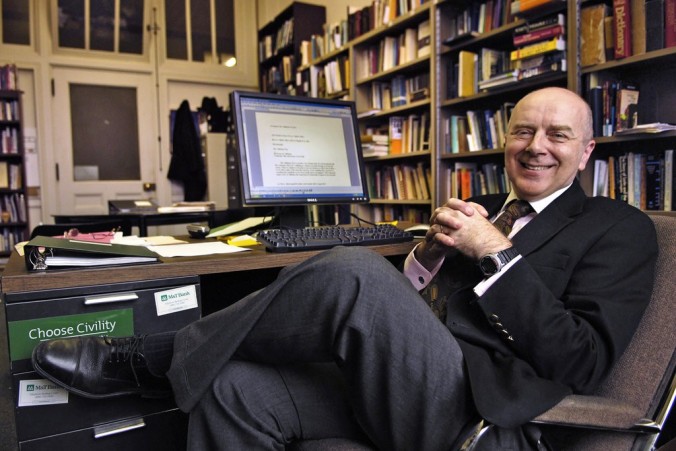 6. And Michael Daigneault, who is still kicking: Michael was the lawyer who first got me involved with ethics as a profession. He consulted with me on the use of non-traditional legal ethics teaching techniques, and when his revolutionary ethics training and consulting company caused him to be recruited hired to run a large international ethics institute, he generously turned over his company and clients to me. Michael is now running Quantum Governance, and as ethical as ever. A recent post during the holidays: