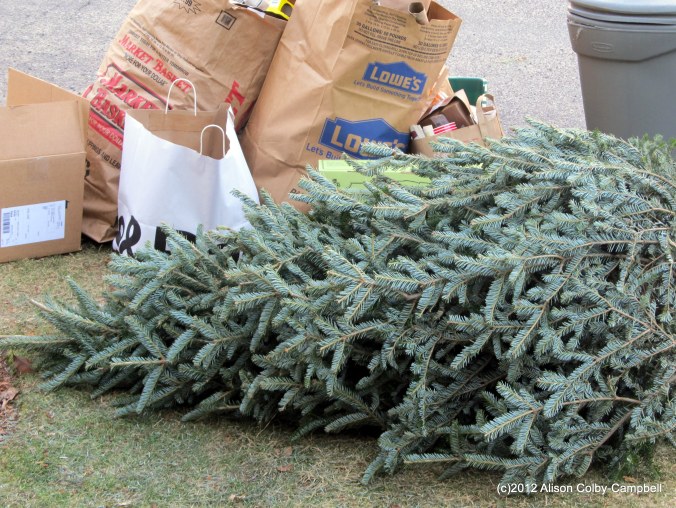 No way around it: today we are taking down the Christmas tree. It took over eight hours to decorate it, but that’s not why I always hate this annual task. Taking down the tree has always seemed to me like a symbolic rejection of all the ethical instincts and interactions of the season that the tree symbolizes. It is easier, somehow, to keep those ethics alarms tuned when this big, garish, lighted thing is dominating the living room, and shining out through the window into the street. One year, I managed to delay the Great Un-Christmasing until mid-February. There is something especially wrong and disrespectful about leaving this symbol of love, family, peace, generosity, continuity, community, kindness and more lying on its side, by the outgoing trash. This years Frasier Fir was a good tree that did it’s job well, and deserves better. Another year, I hated the idea of leaving our tree by the curb so much that I threw it down the bamboo-covered hill behind our home.

I wish I had the courage and resolve of the woman profiled in the Charlotte Observer on December 26, 1999. I adapted it in 2008 for the original script of “An American Century Christmas,” a musical revue recalling old-style TV Christmas specials as well as songs Christmas literature and movies.

The artificial Christmas tree in Cathy Riviere’s living room has been up for 24 years. She simply contends that Christmas is such a good thing for everybody, it shouldn’t have to end today. It should go on and on. In her case, it’s been going on a quarter century, with no end in sight. If there truly is a magic surrounding Christmas – something we all sense but can’t quite put our finger on – Cathy Riviere has found it.

“I know people think I’m crazy,” Riviere says. “It makes perfect sense to me. Is Christmas a date, or is it something else?”

Children understand what she means perfectly, as does a tiny but hard-to-miss group of adults, who blink, glitter and glow with good tidings well past the holiday season.

The artificial tree in her living room, was originally bought for $11 on layaway, then smothered with 2,000 ornaments and lights. Everything you can think of is on it, from reindeer made of tongue depressors to Christmas balls sporting pictures of her grand kids. After 24 years, it’s not clear whether the tree is holding the ornaments up or vice versa. Each ornament tells a story and the sum of them tell her life, or at least the good parts. Riviere is not so different from the rest of us in imagining that the best stuff happens at Christmas, which may be one reason she wishes it would never stop.

It’s surely part of the magic of the season, when a woman raised in a gas station by a widower can recall with fondness the mornings Santa left an orange, an apple, some nuts and a silver dollar in a big hunting sock. Now she sits in front of a plastic tree for hours on end, and lives such moments over and over again.

“It’s my therapy. I’m 69 and I don’t take a single pill,” she says. “Whenever things get too much, I come in here and turn on the lights and I don’t feel so bad anymore. If only I could get the rest of the world in here.”

21 thoughts on “Taking Down The Christmas Tree, And Hating Myself For Doing It”