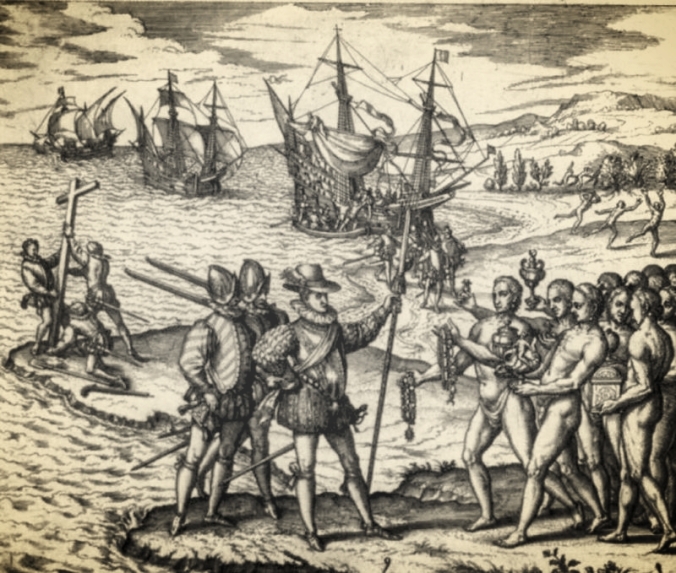 Once again, I am behind in posting deserving Comments of the Day, in particular one from P.M. Lawrence that opens all manner  of worm cans, necessitating a bit more prep than usual. This COTD, sparked by the New York Times’s allowing fake Middle East history to sully its pages, seemed especially appropo given Vermont’s offensive capitulation to political correctness by turning Columbus Day into “Indigenous  Peoples Day.”

This is sentimentality replacing a crucial historical and cultural marker to which attention must be paid. Whatever his misdeeds, Columbus’s voyage and its discoveries was one of the great turning points in the history of mankind. Columbus’s boldness was a catalyst  for furious colonization by the western European powers , new trade commodities products and the introduction of products like corn, potatoes, tobacco and chocolate to the rest of the world, innovations in seafaring and supply preservation, and transformative contacts between cultures. It also led to the United States of America, and despite the laments of the America-haters, the world is far better for that.

Here is Steve-O- in NJ’s Comment of the Day on the post, “Propaganda And Fake History: How Are We Supposed To Trust A Newspaper With Editors That Allow This?”

No one ever mentions that the Muslims had been conquering parts of Europe for 3 centuries before Pope Urban called for a crusade, and if you point it out, the left brushes you off as pedantic at best, an apologist for brutality at the worst. The Inquisition I’ll admit was pretty bad, but, to put it in context, heresy is to the church what treason is to a government, and, when the church is as much a temporal power as the government, it should not come as a surprise that it takes steps to protect that power. The Muslims can lecture us about that when you can no longer have your head chopped off in Sunni countries if you mistakenly sound the call to prayer more than once (a Shi’ite practice, which is prohibited in Sunni countries), and the Protestants can lecture us about it when they apologize for Cromwell in Ireland and the High Commission.

The conquest of the New World was brutal but inevitable. Less developed cultures are pretty much doomed once more developed ones arrive on the scene. That’s how Sumer was wiped off the map by Sargon of Akkad in the 22nd century B.C. (his troops had bows, which the Sumerians knew nothing about), how the Portuguese blew the Muslims out of the water at Diu (galleys are no match for cannon-armed carracks), and the aborigines of Australia had had it once the British started to arrive in numbers (naked people who ate grubs against firearms?). It’s simply not realistic to think that Columbus would have returned and reported he found nothing to keep Europe from continuing to sail west. It’s even less so to think that, instead of the Treaty of Tordesillas, by which Spain and Portugal agreed that Spain would go west and Portugal east for conquest, that they would have signed the Ban of Valladolid, agreeing to leave the primitive cultures of the Americas alone and prohibiting any European ship from sailing west out of sight of the Azores or Canary Islands.

21 thoughts on “Comment Of The Day: Propaganda And Fake History: How Are We Supposed To Trust A Newspaper With Editors That Allow This?””