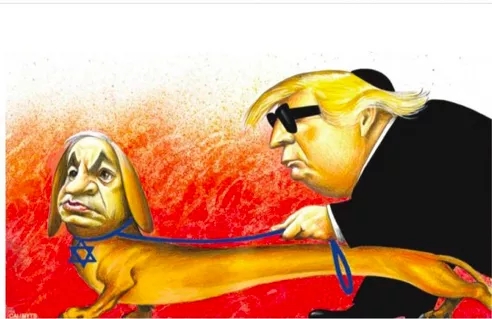 The American Jewish Committee said in response to The Times’s editors’ note after pulling the drawing,. “What does this say about your processes or your decision makers? How are you fixing it?”

The Times can’t fix it.

“The problem is that its publication was an astonishing act of ignorance of anti-Semitism …. at a publication that is otherwise hyper-alert to nearly every conceivable expression of prejudice, from mansplaining to racial microaggressions to transphobia.”

No insult to dachshunds intended: they are actually courageous, feisty little dogs who happen to look silly.

The cartoon was drawn by the Portuguese cartoonist António Moreira Antunes and originally published by Expresso, a newspaper in Lisbon. It was then picked up by CartoonArts International, a syndicate for cartoons from around the world. The New York Times Licensing Group sells content from CartoonArts and other publishers along with material from The New York Times to news sites and other customers….The Times’s United States edition does not typically publish political cartoons and did not run this one, but the international edition frequently includes them. An editor from The Times’s Opinion section downloaded Mr. Antunes’s cartoon from the syndicate and made the decision to publish it…

Nope, I don’t believe it. This is the same “rogue employee” excuse and cover that I have seen many times when organizations make serious mistakes, notably when the Obama IRS scandal came to light. It was not the IRS, we were first told, just a single “rogue” agent in the Cincinnati office that managed to cripple conservative non-profits before the 2012 election. No doubt a single editor will be made the official scapegoat, but I seriously doubt such a cartoon could have been published without widespread ethics blindness by many Times employees. 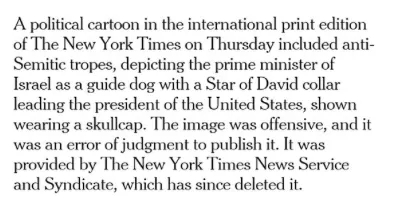 As I noted, there is no apology here, just an admission that ‘mistakes were made.’ I wrote, “There is no apology in sight, nor a clear statement that the cartoon was unfair and untrue. ” Sure enough, the Times has issued a new, improved statement:

There’s that rogue editor again. Still, at least this is an apology. Stephens wrote that the Times owed Netanyahu an apology. My basic rule is that do-over apologies are PR rescue operations, and should be regarded in that light. If a wrong-doer can’t explain what was wrong and why he or she should be forgiven the first time, I take that to mean that they are primarily sorry that they got in trouble.