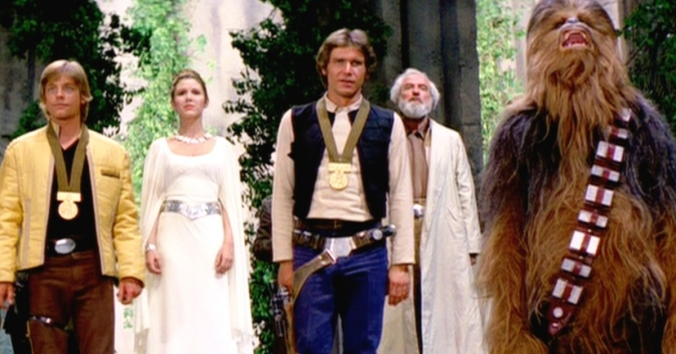 I’d recommend reading the Introduction to this two-part post before diving into this. I also recommend holding down the top of your head…

1. You want crazy, I’ll give you crazy... The Washington Post, one of the two loudest media heralds for the  Woke, progressive and nuts, felt it was necessary to raise this question: “Why didn’t Chewbacca get a medal?” As I’m sure you know, Peter Mayhew, the tall actor who played the lovable, if inarticulate Wookie, died yesterday. Thus the Washington Post felt it was newsworthy to discuss whether the Rebels in the original Star Wars were white supremacists or something because the final scene shows Luke and Han wearing medals for saving the galaxy far away but poor Chewbacca with nothing, although he’s obviously being honored too.

We really do have to be trained to see racism everywhere, especially when white bitches like Princess Leia call the shots.

This comes on top of another Post  article by John Broich, who teaches WWII and British Empire history at Case Western Reserve University, and typifies why sending your kid to college today is irresponsible. His position:  “Allied leaders were anti-Nazi, but not anti-racist. We’re now paying the price for their failure.”

Now if I read this right, the logic of the current history-cleansing Left would require that all monuments to W.W. II leaders, generals and soldiers should be hauled down, since they enabled racism. He concludes,

“After Charlottesville, too, social media echoed with variations of the line: “My grandpa didn’t fight the Nazis only for them to return.” And it’s possible that a good many of our grandfathers might have fought the Nazis expressly to oppose their race supremacy. But it’s worth putting this plainly: The Allied leadership did not fight the war over fascist race-nationalism. That was the historical path not taken.”

The allied leadership and its soldiers fought the war to win, and did.  The total defeat of Hitler and Japan sent the most powerful message possible to the public and the world that genocide and race hatred were suicidal ideologies.

This arrogant twerp, who never hoisted a weapon in defense of his country in his life, has the gall to call my father, who liberated a concentration camp and was crippled during his war service, pro-racism because he didn’t lay the groundwork for the speech censorship today’s leftists favor.  I bet the professor is really upset over Chewbacca too.

2. Poynter succumbs to its sinking profession’s malady. Once, the Poynter Foundation was a reliable beacon of journalism ethics. I guess it was predictable that being run by journalists, the ethics rot destroying the profession would eventually wreck Poynter as well.

They issued  a list—you know, like Joe McCarthy– of untrustworthy or “fake” news sites yesterday, and they were almost all conservative, because, as you know, conservative means untrustworthy and evil.  ThinkProgress wasn’t on the list. MSNBC wasn’t on the list. But the list, apparently developed with the participation of the thoroughly ideological and recently disgraced Southern Poverty Law Center, included The Daily Signal, which writes straight and factual news with a conservative perspective. The former editor of the site issued a scathing op-ed condemning the smear, and….well whaddya know! Suddenly the list had vanished!

3. Here’s a story you’re unlikely to read on most of those sites NOT listed by Poynter…Democratic State Alabama Rep. John Rogers said regarding a GOP anti-abortion bill, “It ought to be a woman’s choice. . . . Some kids are unwanted. So you kill them now or you kill them later. You bring them into the world unwanted, unloved, then send them to the electric chair.” He continued by saying some children who face abortion could be “retarded” and “half-deformed.”

The bill, and now law if signed, is unbelievably unconstitutional, since it directly defies Roe v. Wade.

Asked at the “She the People” forum in Houston whether he will choose a woman to share his ticket, Cory Booker said, “I will have a woman running mate. To me, it’s really clear that we do that.”

Not “I will have the absolute best person I can find for the job,” but “Send out the search teams! Find me a vagina!”

Even the lower-tier candidates are getting in on the sweet woman-pandering action. Eric Swalwell, previously mostly known for threatening to use nuclear weapons on gun owners, tweeted “SPOILER ALERT: I’m a white man. I know where I can’t speak to someone else’s experience.” He pledged to “pass the mic” and “ask a woman to serve as VP.”

What none of these male candidates are brave enough to say is that the voters should nominate the best person who will pick the best running mate and generally accept that sometimes that person will be a woman and sometimes it will be a man.

Admittedly, since no white male will be permitted to carry the Democratic Party banner in 2020, and since he is obviously an idiot even by the low standards of the current field of contenders, his gaffes have mostly entertainment values, nothing more. Still, the guy is a Democratic member of Congress. Here was one of his tweets yesterday:

Do you know how many times the word “Woman” is mentioned in the Constitution?

That is unacceptable. Women must be equally represented and equally protected. #ERANow

“Do you know how many times the word ‘Man’ is mentioned in the Constitution? Zero.”