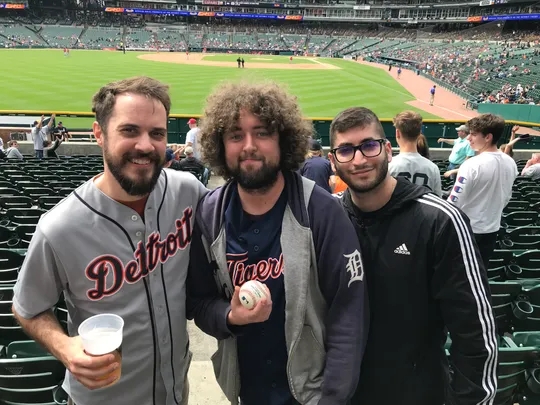 That’s Hydes in the middle. The little white round thing is the ball.

During an Angels-Tigers game in Detroit last week, California slugger Albert Pujols hit a solo home run that gave him  2,000 runs batted in for his career. This wasn’t just a round number. Only four batters in Major League History have knocked that many across the plate in their careers, three if you don’t count steroid cheat Alex Rodriguez, and you shouldn’t and I don’t. The three are Hank Aaron, Babe Ruth,  and now Pujols. It’s a big deal.

[I erroneously had Willie Mays and Barry Bonds (yechh) in the list. Thanks to Diego Garcia for the correction.]

A Detroit fan named Ely Hydes, a law student, got the ball in the stands. As is the usual practice in such situations where a ball represents a landmark achievement, and stadium  security asked him for the ball to present to the man who hit it. Hydes said no.  In an interview later with a Detroit radio station, he said that he hadn’t decided decided whether to give the ball to his brother, his father, or Pujols. The security staff offered money, and then, he said, got nasty with him, which he resented, and caused him to be more adamant about keeping the ball.

It doesn’t take a law student to know that if a fan catches a ball or if it ends up in his possession by any other means, the ball is his. Period. The next tactic the Detroit officials tried was a threat: they told Hydes that they would refuse to authenticate the ball, making it unsaleable as memorabilia. That would have done it for me: I would have nicely told them and the media, and the two baseball clubs, that I would be burning the ball just to demonstrate that using bully tactics to coerce fans should fail, and would fail with me.

Still, why can’t Hydes be like Scott Steffel, a Cal-State Fullerton student at the time, who caught Pujols’ 600th home run and returned the ball to Pujols? And asked for nothing in return….He just may be morally wrong, keeping a baseball that would mean so much more to Pujols — and perhaps the baseball world if the ball goes to Cooperstown — than preserved in his own house.

Hydes is morally wrong to keep what is his rather than give it to an athlete who has made more than $285 million in his career and has another 59 million coming so it can join the other 30 or so baseballs a player like Pujols (though there aren’t many) must have on shelves, in deposit boxes or just sitting in a closet. I’d like to see the moral tenet that supports that one. It’s not the Golden Rule, as Pujols quickly proved by saying that he  wouldn’t ask for the ball, wouldn’t pay a dime for it, and didn’t care if Hydes kept it:

“I don’t play this game so I can pay fans so they can give me, you know… He can have that piece of history, its for the fans that we play for too. He has the right to keep it, the ball went in the stands so I would never fight anybody to give anything back.”

But, as is usually the case these days, the victim of the cultural bullying gave in. Now Hydes says that he will either give the ball to Albert or the Hall of Fame in Cooperstown. Thus the lesson is, “Better do what everyone tells you you should do immediately, or you become a media and social media villain.”

Boy, I sure wish I had caught that ball. The lesson would be quite different.

Post Script: On the question of why the ball belongs to a fan who catches it, see my comment below. The three legal theories are abandonment, gift, and contract. And the answer is…

19 thoughts on “Property Rights, The Fan, The Baseball, And The Lesson [CORRECTED and UPDATED]”