That’s Hydes in the middle. The little white round thing is the ball.

During an Angels-Tigers game in Detroit last week, California slugger Albert Pujols hit a solo home run that gave him  2,000 runs batted in for his career. This wasn’t just a round number. Only four batters in Major League History have knocked that many across the plate in their careers, three if you don’t count steroid cheat Alex Rodriguez, and you shouldn’t and I don’t. The three are Hank Aaron, Babe Ruth,  and now Pujols. It’s a big deal.

[I erroneously had Willie Mays and Barry Bonds (yechh) in the list. Thanks to Diego Garcia for the correction.]

A Detroit fan named Ely Hydes, a law student, got the ball in the stands. As is the usual practice in such situations where a ball represents a landmark achievement, and stadium  security asked him for the ball to present to the man who hit it. Hydes said no.  In an interview later with a Detroit radio station, he said that he hadn’t decided decided whether to give the ball to his brother, his father, or Pujols. The security staff offered money, and then, he said, got nasty with him, which he resented, and caused him to be more adamant about keeping the ball. END_OF_DOCUMENT_TOKEN_TO_BE_REPLACED 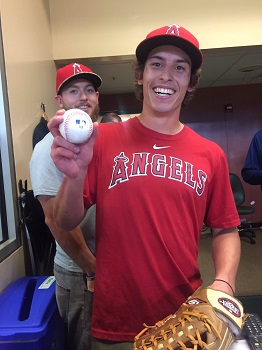 Only 8 players in Major League Baseball history had hit 600 home runs, and last weekend the number became 9 as Los Angeles Angels slugger Albert Pujols reached the impressive milestone with a grand slam in the fourth inning of the June 3 game in Anaheim. Cal State Fullerton student Scott Steffel, a 23-year-old lifelong Angels fan, caught the ball in his glove. Such a souvenir is a collector’s dream, and catching it a baseball fan’s once-in-a-lifetime dream-come-true.

Yet Scott Steffel gave the ball back to Albert Pujols, the man who hit it. He didn’t ask for money or a truck-load of autographed bats and gloves.   He didn’t think about how much money Pujols had )millions and millions) and that the ball was figuratively made of gold. He just gave it back, saying that he didn’t feel it belonged to him, but Pujols:

“It’s not my ball, it’s his. He deserves it. He’s one of the best baseball players right now. Of all time.”

THIS is "El Hombre." Stan's Polish, by the way. Do you care? Does the Asian American Journalists Association?

If you don’t know who Albert Pujols is, you should: he’s probably the best hitter in baseball, a slugging first baseman whose career so far has already guaranteed him a spot in baseball’s Hall of Fame. Over the winter he left his original team and the city that worshiped him, St. Louis and its Cardinals, because, though the team he professed to “owe everything” offered him a deal that would guarantee that his great-grand children could be beach bums all their lives, a team in Southern California, the Angels, offered him even more, so he can light his cigars with C-notes and pave his driveway with gold.. I think elevating money over every other value to that extent is an unethical and culturally corrupting choice, and said so at the time.

Now Albert has re-endeared himself to me  by publicly objecting to the Angels’ pre-season promotional campaign calling him “El Hombre.” “What?” you say. “I thought you have been condemning political correctness in the discussion of athletes with ethnic identities! Don’t you think it’s ridiculous for Pujols, who is of Hispanic descent, to object to a nickname that plays on his heritage?” Indeed I have been condemning such political correctness and over-sentivity, and still do. But that isn’t why Albert is objecting.

Back in St. Louis, you see, they also tried to call Pujols “El Hombre,” in a deliberate evocation of the city’s most famous and celebrated slugger, the great Stan “The Man” Musial, one of the best and most admirable players in baseball history. Pujols put a stop to it. There was only one player in the city who could carry the title “The Man”, he said, and that was Musial, who is alive and in his 90’s. Just saying “the Man” in a different language didn’t change the fact that the honor was Musial’s, and shouldn’t be taken  away. Stan Musial was and is “the Man;” Pujols respected that, and defended it END_OF_DOCUMENT_TOKEN_TO_BE_REPLACED

I'm sorry! This was supposed to be a picture of Albert Pujols, not King Midas. Well, six of one, half-dozen of the other...

Cardinal free agent first baseman Albert Pujols, generally regarded as the most talented baseball slugger alive, just jumped from his supposedly beloved St. Louis to the Los Angeles Angels because they offered him several more millions of dollars per year that he couldn’t possible spend if he tried than the Cardinals did. The attitude of most players, fans and sportswriters, not to mention the players’ union (naturally), is “Of course! Who wouldn’t?”

Who wouldn’t? A more ethical, less greedy, more thoughtful human being, that’s who.

The Angels won Pujols with an offer of $254 million dollars for ten years, making him the highest paid player on captivity. The Cardinals. on the other hand, whose fans had cheered him, embraced him and worshipped him, and which had established Pujols as one of the franchise’s icons fit to stand with Stan the Man Musial, Bob Gibson, Dizzy Dean and Lou Brock, had offered a measly $204 million for nine years, or about 23 million a year. The difference between the two offers is minimized, if not eliminated, by the cost of living disparity between the two locales: housing, for example, is about 250% more expensive in LA. END_OF_DOCUMENT_TOKEN_TO_BE_REPLACED