Seldom does a news story I deem too predictable and silly to warrant posting about suddenly explode into a full-fledged ethics train wreck, but this time, it did. President Trump apparently couldn’t resist the irony of Speaker Pelosi calling for “an intervention” for him in one of her typical rambling, halting, disturbing performances, and tweeted “PELOSI STAMMERS THROUGH NEWS CONFERENCE” along with a video.

This was, of course, both juvenile, petty and typical conduct by the President. At this point, I don’t see how anyone can get upset about it, be surprised by it, or pretend to be outraged by it. Doing so is one more marker of Trump Derangement: yes, we KNOW you hate the man and can’t stand his manner, manners, and mannerisms. These were a matter of record years before he was elected. Anyone who voted for him knew the was part of the package. What possibly is accomplished by railing about it now?

Now, if Donald Trump were 14, or not President of the United States and obligated to be a role model and epitome of dignity and rectitude, one could sympathize with this latest example of tit-for-tat payback. Pelosi accused him of a “cover-up” because he has chosen not to cooperate with Democrats looking for things—something, anything— to impeach him with. This is the three year old “we know you must have done something horrible because you are horrible,” guilty until proven innocent smear that the “resistance” has used from the moment Trump was elected to try to undermine his Presidency in an  undemocratic, slow-motion coup unlike anything the nation has endured before. Then she made her “intervention” comment. Of course the President resents it and is furious, and he has never denied that his personal ethics code demands that he strike back when he is attacked. No, it isn’t ethical, admirable or Presidential. But it’s him.

The Speaker was also crossing lines of decorum that shouldn’t be crossed, but that horse not only left the Democratic barn long ago, it has traveled cross-country, mated repeatedly, and has nasty, mean-spirited, hateful colts galloping all over the place. One of Trump’s gifts is making his enemies behave worse than he does, and the Democrats and the “resistance” have taken the bait and asked for more, the fools. All they had to do was to take the high road, speak respectfully but sadly about the President’s transgressions, stick to the facts, and refrain from name-calling and ad hominem attacks. Like the man on the ledge heeding “Jump!” chants, they chose to follow the worst of their supporters’ demands instead, proving, of course, that they were no better than the President, and, I would argue, worse.

But this is how the 2016 Post Election Ethics Train Wreck has been rolling since November 2016. I’m bored. It wasn’t newsworthy, much less Ethics Alarms commentary worthy. Then… 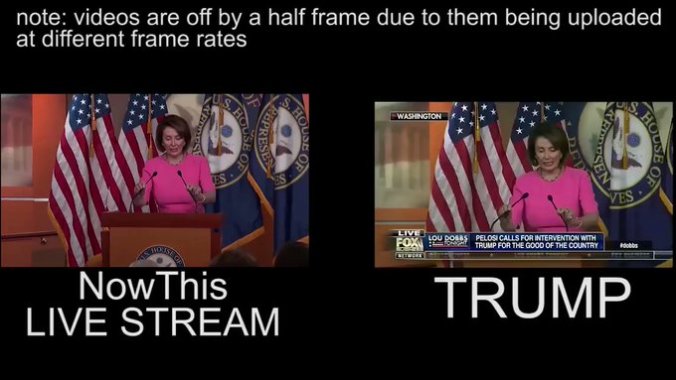 Several observers pointed out that the frame rates of the clips were different, off by a half frame, but the content was the same, and the audio levels matched. The media, however, encouraged a misconception  by deliberately confusing the clip Trump tweeted with the video the Post wrote about in its story, “Faked Pelosi videos, slowed to make her appear drunk, spread across social media.”

The significance of these ethics train wreck passengers? They rushed to Nancy Pelosi’s defense, and were willing to distort the facts and confuse the public to do so. Over at CNN, the network showed Trump’s video and stated it was faked, but didn’t show the actual video that was supposedly doctored. Now what possible explanation is there for that? CNN didn’t show the “real” video because it would have exactly the same content as the one Trump tweeted.

Significance? It’s one more troubling example of how the left side of the political spectrum now sees censorship and silencing as the appropriate remedy for speech it finds unpleasant or inconvenient. It also shows how progressives and Democrats assume that the social media platforms naturally have their backs…as they usually do.

Then the train wreck got a surprise celebrity passenger, none other than…

I’ll let Ann Althouse take over here, because her reaction is identical to mine: BOY, am I sick of Democrats, and especially Hillary, reflexively dismissing any criticism of a female politician as “sexist.”

” I’m tired — and was tired long ago — of the Hillary Clinton theory that every attack on a woman is “sexist.” Women in high positions need to be attackable or I don’t want them in high positions. So that theory will perversely push me into the sexist position that women should not hold high positions….it’s certainly not sexist to mock a politician’s bad speech. Of course, Trump’s speech is mocked all the time. One of the points in favor of having Trump as the President is that we feel so free to mock him. To vote for someone deemed unmockable would sacrifice a highly valuable freedom — the freedom to mock the President….”

Exactly. It will take a lot of convincing to get me to vote for a black or female Presidential candidate until I’m certain that his or her supporters won’t try to intimidate critics by calling them racist or sexist—as with Hillary and Obama.

For the record, Pelosi sounds confused, addled and like an escapee from the retirement home much of the time, and no doctoring of videos is necessary to show it.