Antonio and his beloved helmet

The weird Brown saga  is useful evidence—I almost wrote “intelligence,” and it’s definitely not THAT—regarding the mystery how the NFL can get away with crippling its players by nearly guaranteeing that they will be brain-damaged early in life and demented later. True, they pay their stars a lot to give their brains and future to the game for the profit of team owners and sponsors. True, NFL fans don’t care what if their favorite human battering rams and tackling dummies can’t speak coherently in their fifties as long as they can chant, “DE-Fence!” every Sunday (and some Mondays and Thursdays) while and guzzle beer. Still, it helps that so many NFL players aren’t all that swift to begin with.

Exhibit Duh is Oakland’s Antonio Brown, who has reportedly told team officials that he will quit the game unless he is allowed to wear his old helmet in the upcoming season. That old helmet has been banned by the league, which in light of CTE research and various tests and studies, has determined that it is unacceptably dangerous, unlike the game itself, which is acceptably dangerous.  Brown has even filed a grievance with the NFL to try to get permission to wear the same model helmet he wore with the Pittsburgh Steelers. That helmet, however, is no longer certified by the National Operating Committee for Standards and Athletic Equipment. Now, the NFL revels in The Kings Pass, and has allowed its stars to get away with a lot—drug use, felonies, murder arrests, cheating, domestic abuse, beating their kids, protesting the National Anthem for no coherent reason. I doubt, however, that even the NFL will cave to Brown’s demands.

All sports have safety rules, and players do not have the choice of defying them. Indy Racers can’t declare that they are more comfy without seat-belts; cyclists can’t insist that they want to wear baseball caps in the Tour de France. Interestingly, hockey goalies can play maskless, but none are foolish enough to do it. There hasn’t been a bare-faced NHL goalie since the mid-70’s, when they decided that they didn’t want to go through life looking like Terry Sawchuck… 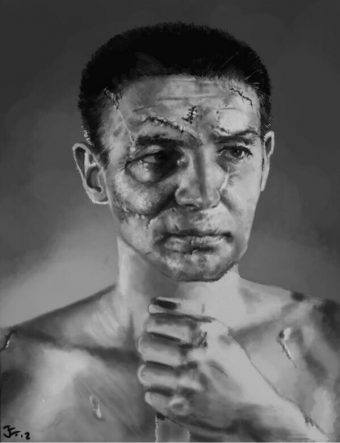 Of course, if you’re sufficiently brain damaged, you don’t care how you look.

Brown’s determination to reduce his IQ by wearing the banned helmet is the stuff of myth and legend. Michael Silver related the tale in a long trail of tweets:

Antonio Brown alarmed Raiders coaches and teammates by railing against the NFL’s enhanced enforcement of helmet regulations, a policy change which will likely force the star receiver to switch to a new model. Brown’s vocal resistance to the mandate, both during OTAs and shortly after his arrival in Napa, Calif. for training camp, has contributed to a disconnect with the team that acquired the seven-time Pro Bowl selection via a trade with the Pittsburgh Steelers last March… According to four sources familiar with Brown’s current absence from camp, which dates back to late last week, Raiders coaches and players are concerned that the receiver’s unhappiness regarding the helmet issue may be playing a role in his decision to stay away from  Brown initially left to seek an additional medical opinion on his frostbitten feet. [ He had entered a cryotherapy chamber without proper foot protection, resulting in frostbite.] Before leaving, Brown pushed back for a third time against the league’s prohibition of the helmet model he has worn for his entire nine-year career… His continued frustration surrounding the situation has created a buzz among teammates and coaches, one of whom referred to the saga as “honestly the most insane thing I have ever heard. I don’t know why it’s so important to him. It doesn’t make any sense.” … The pushback began in May, when the receiver was informed by the Raiders that the NFL had officially eliminated the one-year grace period for certain helmet models, including the one worn by Brown, which had fallen short in laboratory testing for head-impact severity…This meant that Brown and 31 other players who finished the 2018 season on NFL rosters, including star quarterbacks Tom Brady and Aaron Rodgers, would have to switch to approved helmets… On a conference call with reporters earlier this spring, Jeff Miller, the NFL’s exec VP of health & safety initiatives, said that any team found to have known about a player wearing a banned helmet or to have facilitated the use of one would be subject to league discipline… Each team’s equipment manager had been instructed to remove all banned helmets. All of this was conveyed to Brown at the team’s training facility a few days before the start of Phase Three OTAs—the first time players are allowed to wear helmets during on-field workouts…When he showed up for the 1st OTA, however, Brown requested his old helmet. After being told he’d have to wear an approved model, witnesses say, the [Wide Reciever] loudly voiced his displeasure, complaining QBs such as Brady and Rodgers were not being subjected to the same scrutiny…Shortly thereafter, Brown stormed out of the facility in protest. Later that day, Raiders officials found video footage of Rodgers, during the Green Bay Packers’ OTA session, wearing an approved-model helmet and texted it to Brown… The following day, Brown showed up in Alameda and acted like nothing had happened, accepting the new helmet from an equipment manager without protest and completing the workout…) However, sometime in the next couple of weeks, Brown once again tried to take the field with his old helmet, which he had since had repainted with colors approximating—but not completely mimicking—the Raiders’ silver-and-black design… He was told the helmet was not allowed, and once again, he acquiesced and wore the new model. Before Brown arrived at training camp last month, coaches and teammates believed the issue had been resolved… But Brown, who practiced on his tender feet for only two days before leaving Napa to seek another opinion, tried yet again to sneak his old helmet onto the practice field, ultimately being told by team officials to remove it…Since joining the Raiders, Brown has frustrated his new bosses by showing up late to numerous meetings and by often appearing unfocused in them…

The ethical course, I think, would be to let Brown wear his favorite helmet, but ban pro football.