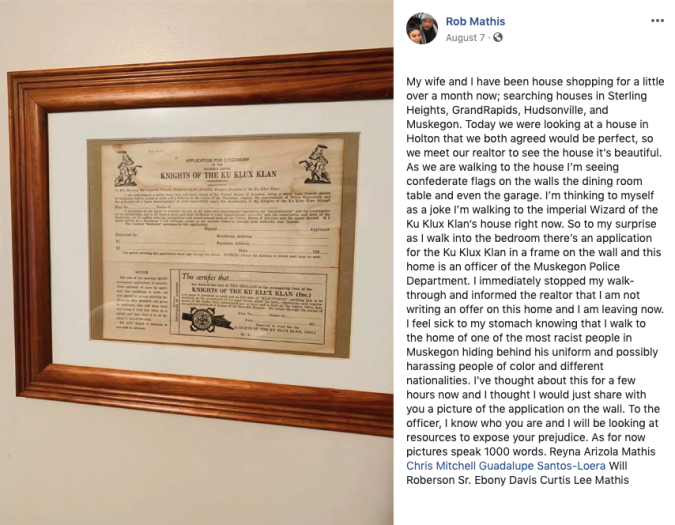 Either our nation is committed to the principles of freedom of thought, speech, expression and association,  or it is not.

With that preface, here is the kind of gray area, bizarre fact pattern controversy that puts ethical analysis to the test.

In the Muskegon County (Michigan) town of Holton, African-American  Rob Mathias, accompanied by his wife and children, was walking through the home of Charles Anderson, a local police officer, with the intent of possibly purchasing it.  Then he saw a framed Klu Klux Klan application hanging on a wall, as well as several Confederate flags. He and his family immediately left the property.

Later he posted a photograph of the KKK application on Facebook, (above) explaining later that he felt it was something the public had a right to know about, especially if the officer had a history of questionable interactions with African Americans.  Mathias wrote that Anderson “was one of the most racist people” in the community and “hiding behind his uniform.” The post was also personal and threatening, concluding with “I know who you are and will be looking for resources to expose your prejudice.”

The Facebook post triggered an internal investigation of Anderson, and he was placed on administrative leave. “We do take this sort of issue, seriously, and we are working hard to understand if/how this may impact his ability to safely and fairly police our community,” Muskegon City Manager Frank Peterson reporters. Muskegon County NAACP President Eric Hood piled on, saying, “We want a thorough investigation to be sure that when he goes out there and puts on that uniform and performs his duties as an officer that he’s being fair and impartial.”

“I’m still disgusted by it. I’m hurt,” said Mathias “You can’t serve your community and be a racist. You can’t. There are people of all different colors, of all different nationalities … out there that you have to serve and protect. You can’t just protect one group of people.”

Rachel Anderson, the officer’s wife, told reporters that her husband is not and never was a KKK member. She said he was a collector, and called the uproar a misunderstanding.

“I like antiques, but I collect things that I represent. You can go in my basement, we have Detroit Lions, Red Wings, Michigan stuff, everything we associate ourselves with.So why would you collect something you don’t associate with yourself?”

Has this situation been handled fairly, responsibly and ethically?

1. It is nobody’s business but the citizen what that citizen chooses to have in his or her home, on the home’s walls, or anywhere else. Unless he has human skin lampshades like Ed Gein, stolen Picassos or sex slaves chained to the wall, such personal items and choices are legal and private, and the citizen’s decisions in regard to them are Constitutionally protected.

2. Mathias was wrong in many ways. It is wrong to enter a house as a guest and take photos of the interior with the intent of embarrassing or impugning the owner. It is wrong—unfair, disrespectful, dishonest—to make such a decision as well as assumptions about the significance a home’s accouterments without informing the host and asking for an explanation, not that the home owner would be obligated to supply one.

3. Posting the photo on Facebook also wrong, and inexcusable. Mathias says he “prayed” before doing it. Yechh. So God ratified this unethical decision, did he? Have the courage to take responsibility for your own unethical conduct.

4. Don’t ask me why a police officer, or anyone, would show their home to a potential purchaser, especially an African American, with a framed KKK applications and Confederate flags on the wall.  Maybe he was trying to avoid discrimination charges by using the decorations to discourage a black buyer. Or maybe he’s an idiot.

5. Having such decorations does not prove a homeowner is a racist, but it creates a rebuttable presumption that he is. However, it is not illegal to be a racist. It is not illegal to like memorabilia that extol racism. It is illegal to engage in racist and discriminatory conduct. Absent evidence of such conduct, racist decorations are not an empoyer’s concern, nor the governments.

6. Mathias says, “You can’t serve your community and be a racist. You can’t.”  Wrong, very wrong, and demonstrably wrong. Abraham Lincoln and George Washington were racists; so were Thomas Jefferson, Teddy Roosevelt and cousin Franklin. They served the community, indeed the whole nation, extremely well and fairly. After Clarence Darrow confronted the all-white jury in the Sweet trial and told them that as whites passing judgment on a black man accused of murder, they would have to “get past” their racism in the best interests of the nation and humanity, they did, acquitting his client. We must not judge, condemn and punish people for what they think, might think, believe or may believe. We must  pay attention to what they do.

7. Anderson is a 20 year veteran who has not, apparently, been accused of racial bias. The one incident cited in news reports was a 2009 a fatal shooting involving a Black parolee anmed Julius Johnson. He  was fleeing a traffic stop on foot when  he struggles with the officer, who was badly beaten . Anderson fired on Johnson, saying he feared for his life in the fight. The Muskegon County prosecutor determined the officer was justified in using deadly force. Of course he did: I doubt any shooting that is preceded by the victim fighting with the police and injuring would be called excessive use of force. The NAACP unsuccessfully called for a federal investigation of the shooting. Of  course it did. Like Black Lives Matters, any white officers who shoots a black perp in the act of resisting arrest is presumed racist, a murderer, and guilty.

8. All of that said, the city and police force has no choice but to investigate, since the Facebook post, unfair and unethical as it is, incites emotional responses  and puts everyone involved on the proverbial spot. The episode reminds me of the Donald Sterling fiasco, an Ethics Train Wreck, in which an NBA owner was surreptitiously recorded by his mistress making racially charged comments, which she then allowed a radio host to broadcast. No one should be punished, fined and pilloried for what they say in confidence in their own bedroom, but if such statements become public, they can hardly be ignored.

9. Mathias’s wife is especially presumptuous. Just because she collects items that “represent her,” others can, do, and have a right to collect things for different reasons. “That person is bad because they aren’t like me” is a particularly insidious attitude, and there’s a lot of it going around lately.

10. In the end, perhaps what we have is a “Racist Home Decorations and Memorabilia Principle,” similar to the Naked Teacher Principle so familiar to frequent readers here. You have a right to display and collect whatever you want, but if your tastes appear objectively racist and your memorabilia somehow becomes known to the public, you can’t complain about the  adverse consequences. You accepted the risks.

58 thoughts on “Ethics Quiz (And Poll): The Cop And The KKK Application”