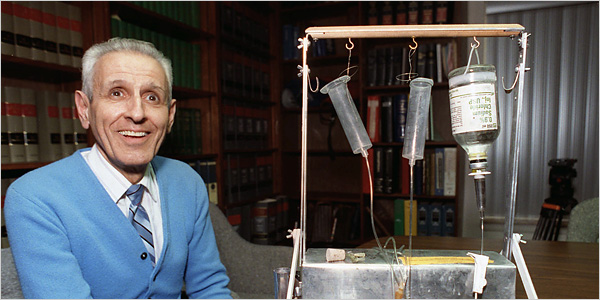 Dr. Kevorkian was happy to help you kill yourself…

As health care costs rise and the public as a whole becomes more financially responsible for the care of individuals; as the population ages and the massive increase in health care costs in the final years and months of life becomes an increasing burden on society, and as legal abortion stays front and center as the most brutal form of utilitarianism, where a weaker and “lesser” life is deemed expendable for the well-being of others, I expect the United States culture to be drawn closer and closer to the seductive policy of legal euthanasia.  It is now legal in Washington, D.C.,  California, Colorado, Oregon, Vermont, Maine (as of next year), New Jersey, Hawaii, and Washington. You may note what these states all have in common….not that there’s anything wrong with that.

I believe that permitting an individual to kill another with the victim’s consent is so ripe for abuse—Dr. Kevorkian comes to mind—that it crosses an ethical line that should be thick, black, and forbidding.  The alleged consent can too easily be coerced or manufactured for the convenience of others. A recent case in the Netherlands confirms my strong reservations.

The unidentified patient, 74, had asked in writing for doctors to end her life if she had to be admitted to a nursing home, and if she thought the time was right. When she entered a home in 2016, however, though incapacitated, she appeared to have changed her mind, and gave what prosecutors called “mixed signals” about her desire to die.

Nevertheless, a  doctor at the home, also unidentified, proceeded with the euthanasia, “in close consultation with the family.”

The London-based Journal of Medical Ethics published a paper reviewing  the case. It revealed that the doctor put a sedative in the patient’s coffee,  and the patient’s family members restrained her as she struggled to resist a lethal injection.

Still, the Dutch court cleared the doctor of any wrongdoing, writing, “The patient was heavily demented and deemed completely mentally incompetent.” Taking into account the patient’s state, the court ruled that the doctor did not have to verify her wishes at the time of administering euthanasia.

I don’t see how such reasoning couldn’t be used to justify killing any patient suffering from dementia, Altzheimer’s, or mental illness. In addition, such approval of legal euthanasia even in cases where the subject struggles with the death-dealing doctor to live, inevitably erodes society’s respect for life, and moves toward a culture that approves of  eliminating individuals whose existence it finds inconvenient or expensive.

Anyone who casually accepts this development as ethical is at least obligated to read the Nuremberg trial transcripts.

I wonder if anyone will ask the ten contenders for the Democratic nomination for President about their views on euthanasia. I suspect that the answers would be enlightening.

72 thoughts on “The Euthanasia Slippery Slope: A Case Study”