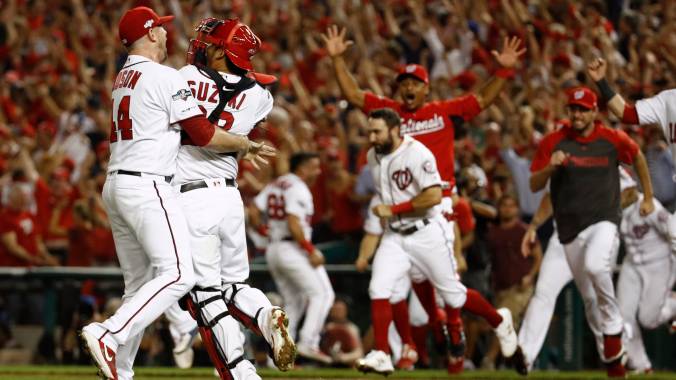 The Washington Nationals had never won an elimination game in the National league post-season. They were 0-6 in such games going into last might’s do-or-die single Wild Card play-off at home against the Miracle Milwaukee Brewers. Following the script many Nats fans dreaded, the team’s Hall of Fame-bound ace, Max Scherzer, quickly gave up three runs while the Brew Crew’s storied bullpen kept the offense at bay save a solo homer from National shortstop Trey Turner. Heading into the bottom of the eighth, the Nationals had to face closer Josh Hader (he of the Hader Gotcha), who gives up hits less often than some pitchers give up runs.

Then, as they say, fate took a hand. With one out, uninspiring Nats pinch-hitter Michael Taylor reached first illicitly. A 3-2 pitch from Hader hit the knob of Taylor’s bat and immediately ricocheted onto his hand. It should have been called a foul, but the umpires ruled it a hit-by-pitch, sending Taylor to first base. Hader struck out the next Nats batter, then aging Nats slugger Ryan Zimmerman was called upon as another pinch-hitter. He barely connected with a pitch out of the strike zone, breaking his bat, but his weak “dying quail” bloop dropped in just over the head of the Milwaukee second baseman for a cheap and fortunate single. (On TV, Zimmerman could be seen smiling and shrugging sheepishly.) That meant the tying runs were on base for the Nats best hitter, MVP candidate Anthony Rendon. Hader gave him what is known as an intentional unintentional base on balls in order to face 20-year-old Juan Soto, a left-handed batter. Lefty Hader allowed left-handed batters to hit .143 this season. But young Soto lined a pitch into right center, and Brewers right fielder Trent Grisham, one of the heroes of the late-season Brewers play-off drive, did a Bill Buckner. The single got past him (he was charging the ball in what would have been a futile effort to throw out the tying run at the plate) , and all three runners scored. Incredibly, the Nats now led 4-3. After the Brewers went down in the top of the 9th without scoring, they, and not Milwaukee, moved on to the next round of the play-offs.

Lesson: In baseball, as in life, it is as important to be lucky as to be good. Chaos lurks in every second, and the illusion of control is just that, an illusion. A bad call, a fluke hit, and a horribly-timed fielding botch that the same outfielder avoids 99 times out of a hundred, and so much changed for two cities, two fan bases, and the 2019 post-season, affecting jobs, careers, reputations and commerce.

This is why we should never give up, never despair, and never get cocky. It is also why we should strive to live as ethically as possible. We can’t control whether we win or lose, but we can control how.

1. Again we must ask: when did the Democratic Party decide to abandon freedom of speech?  Yesterday, we learned that Joe Biden’s campaign wants the news media to censor adversary commentary from Rudy Giuliani, while claiming that no one who isn’t a public official is qualified to opine on TV regarding public policy.  Now Senator Kamala Harris, who also aspires to be President, says President Trump should be banned from using Twitter because he  uses the platform in an “irresponsible” way. Harris, in an interview with CNN host Anderson Cooper, also called for “other mechanisms” to make sure Trump’s words “do not in fact harm anyone”—you know, like harming her party’s election prospects by exposing its Big Lies and open coup attempts.

I wonder if the public sees how ominous the repeated Democratic calls for censorship are. Maybe the President will tweet about that.

Of course, the President’s use of Twitter is often irresponsible, but also a necessary end-around media propaganda aimed at unseating him and undermining democracy. It is remarkable that Harris, a Senator and a lawyer, somehow missed  that the First Amendment proclaims the importance of free speech to our society. It doesn’t only endorse the right to engage in responsible speech. I think, for example, that advocating censoring the speech of the President of the United States is irresponsible, but I’ll defend Harris’s right to do it—and my right to conclude that because she does it, she is an ignorant, dangerous fool.

2. The best part of the latest impeachment push…is that the masks are coming off. The Democratic Party is revealing now, beyond honest rebuttal, that its goal is and has been destroying the Trump Presidency by any means necessary and by any pretense required. Its unethical ally, the news media, is doing the same. Since Friday, for example, the New York Times pundits have admitted that it is Trump the man who is their target, not a President who has committed demonstrable “high crimes and misdemeanors”—the Constitution’s standard for impeachment.

“Trump is the Smoking Gun” one op-ed column was headlined. “Impeach the Malignant Fraudster” is the headline of Charles Blow’s Trump-Hate column of the week. “America Is Better Than Donald Trump” says the pull-line from David Leonhardt’s latest hate-fest.

Last week,  Leonhardt concluded a list of alleged Trump misdeeds by writing, “He is the president of the United States, and he is a threat to virtually everything that the United States should stand for.” [In fact, the effort to destroy Trump’s presidency by the “resistance,” Democrats and false journalists like Leonhardt is the threat to everything the nation does stand for. If you have a few minutes and a strong stomach, read that column, and try to identify how many outright lies and distortions, as well as contrived trivia, Leonhardt cites as justification for impeachment. On any op-ed page that didn’t include dregs like Michelle Goldberg, Paul Krugman and Charles M. Blow, Leonhardt would be the bottom of the barrel; he’s not worth rebutting—I’ve done it before—but this column really is especially vile. ]

Then there is supposedly rational David Brooks, whose column’s headline  this week began “Yes, He’s Guilty....” Exactly. To the Times, to progressives, to Democrats, Donald Trump was guilty in their eyes from the second he was elected. They want him removed not because what he has or may have done, but because of who and what he is. That’s bigotry. That’s bias. That’s hate. That’s not democracy, but because democratic processes and institutions didn’t deliver what they wanted, these hypocrites are willing to risk destroying some or all of it. 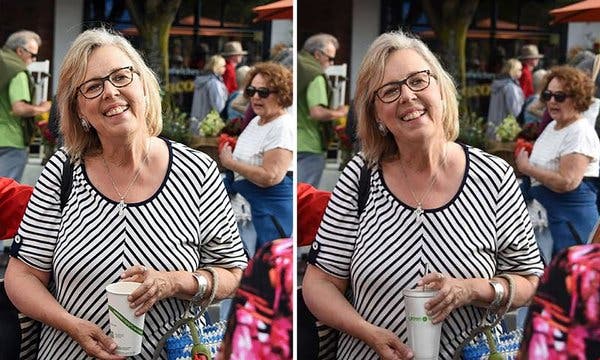 The excuses and rationalizations being used to minimize this are as instructive as the episode itself. Fact: “Green” advocates will distort facts and reality to advance their cause, even with something as trivial as a cup. Can you trust a movement that deems this an acceptable practice? No.

Does this lend support the contention that climate change research is distorted and hyped by activists, including activists in the scientific community. Yes.

“Green Party officials said the editing wasn’t done to conceal anything because the original cup was also environmentally friendly. Ms. May explained that a well-intentioned party staff member did it to brand the image with the party’s logo.”

Hilarious! Of course the stunt concealed something: it concealed that the cup didn’t have a metal straw.  And the head of the Green Party says this was benign because it was “well-intentioned” (See Rationalization #13A  The Road To Hell ) Gee, Ms. May, what other well-intentioned deceptions would you condone because of ? If fakery is OK to advance little objectives, surely it is justified to advance more significant ones!

4.  San Francisco to the NRA: ‘Just grandstanding! We didn’t mean anything by it when we called you a terrorist organization! Nothing personal!’   Last month , San Francisco’s Board of Supervisors—another one of those Democratic organizations that doesn’t like a lot of the Bill of Rights— passed a resolution declaring the National Rifle Association a domestic terrorist organization. It also ordered city employees to “take every reasonable step to limit” business interactions with the NRA and its supporters. Who would think that such an edict against constitutionally protected speech could stand? Well, deluded, hyper-ideological Left-wing fascists, I guess.

The NRA sued and San Francisco is backed down before the suit even went to court. In a formal memo to city officials, San Francisco mayor London Breed declared that “no [municipal] department will take steps to restrict any contractor from doing business with the NRA or to restrict City contracting opportunities for any business that has any relationship with the NRA.” The memo goes on to state that “resolutions making policy statements do not impose duties on City departments, change any of the City’s existing laws or policies, or control City departments’ exercise of discretion.”

Shame should be heaped on San Francisco for even attempting such a clear breach of Constitutional law. Yet a majority of that city’s public applauded, because they have been corrupted by their elected officials.

40 thoughts on “Morning Ethics Warm-Up, 10/2/19: While Basking In The Glow Of Another Life Lesson From Baseball”