Whatever time it is…

1. Not exactly a shock, but we now know Ruth Bader Ginsburg lied in her 1993 Senate confirmation hearings. At a Georgetown Law Center event last week featuring both Clintons and Justice Ruth Bader Ginsburg, Bill Clinton told the audience that he queried the Justice-to- be about Roe v. Wade before nominating her to the Supreme Court in 1993:

[Ginsburg] knew this perfectly well, that I was under a lot of pressure to make sure I appointed someone who was simon-pure, which I had said I thought was important. But I was fascinated by a—either an article I had read or something I had read on Justice Ginsburg saying that she supported the result in Roe v. Wade but thought Justice Blackmun should have decided the case on the equal protection clause not the right to privacy. And I asked her the question and she talked about it just as if it was any other issue, no affect: “This is what I think, this is why I think it,” and she made a heck of a case.

That’s odd, because one of the written questions she responded to in the process was…

Has anyone involved in the process of selecting you as a judicial nominee (including but not limited to a member of the White House staff, the Justice Department, or the Senate or its staff) discussed with you any specific case, legal issue or question in a manner that could reasonably be interpreted as seeking any express or implied assurances concerning your position on such case, issue, or question? If so, please explain fully.

And the now-revered Ginsburg replied,

It is inappropriate, in my judgment, to seek from any nominee for judicial office assurance on how that individual would rule in a future case. That judgment was shared by those involved in the process of selecting me. No such person discussed with me any specific case, legal issue or question in a manner that could reasonably be interpreted as seeking any express or implied assurances concerning my position on such case, issue, or question.

Yet the former President directly contradicted this, in Justice Ginsberg’s presence.

She struggled to find the right words, and came up with “some mess on a napkin,” but that doesn’t mean she doesn’t care. This is the “if a woman thinks its life, it’s life, and if she doesn’t, it isn’t” theory in practice.

I also found myself wondering that if it were appropriate for a mother to be that remorseful about giving up her living child, how should she feel about the child who never had the opportunity to live because it was aborted…

“So my beautiful son [redacted] has the chickenpox at the moment and we’ve both decided to help others with natural immunity this Halloween!” “Walker” wrote. “We have the packaging open and closing down pat and can’t wait to help others in our community.” When she took the predictable amount of flack in social media, she responded, 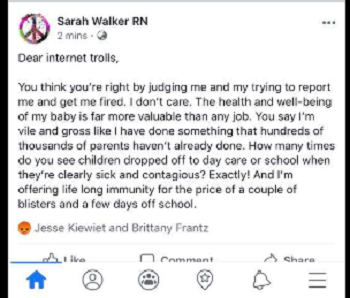 As will undoubtedly come as no surprise, this idiot probably didn’t infect anyone, since chickenpox virus is unlikely to survive on a lollipop. Still, when adults blithely talk about poisoning candy, attention must be paid.

4.  What do we do about people like this?…Myah Autry, who endangered herself and zoo animals by climbing the lion’s enclosure at the Bronx Zoo in September, spoke to reporters following  a court appearance for a shoplifting charge in Kearny, New Jersey. She said her reasoning for jumping into the lion’s den was “spiritual” and that she was never in fear during her illegal visit.

No, that’s not what you are, dear.

7 thoughts on “Sunday Ethics Fallback, 11/3/2019: Poisoning Children For Their Own Good, And Other Alarming Developments”