Traffic here inexplicably dead yesterday and today. Is there a secret ethics convention nobody told me about? There is, isn’t there? I’m hurt…

1. It’s too bad so many readers don’t pay attention to the baseball posts, because a lot of fascinating ethics issues with general applications arise…like right now. Yesterday, as already mentioned in an update to yesterday’s post and a couple of comments, the Boston Red Sox “parted ways with Manager Alex Cora by mutual agreement.” (He was fired.) In a press conference I just watched, the Red Sox brass said that Cora, who was both successful and popular in Boston, was let go solely because of the MLB investigation report regarding his involvement in cheating while serving as a coach for the Houston Astros in 2017, and the allegations of cheating  while managing the Sox in 2018, still under investigation, played no part in the decision. What they meant is that the Astros cheating was going to result in a long suspension for Cora anyway, so the team didn’t need to wait for the bad news regarding his cheating in Boston.

The weirdest thing about the press conference is that none of the four Sox officials would do anything but praise Cora, his character, his judgment, his dedication to the team, his devotion to baseball. Gee, why did they fire this saint, then? Alex Cora’s character is obviously flawed, or he wouldn’t have masterminded major cheating schemes that cost the Astros 5 million dollars and four key draft choices while losing the jobs of two men who advanced his career. Cora’s judgement also stinks, because his actions have now cast a shadow over two teams, their championships, and the records of the players his schemes benefited.

If he was so dedicated to the team, why is  it now facing a public relations and competitive disaster because of his actions? If he was devoted to baseball, how did he end up at the center of a scandal that undermines the perceived integrity of the game?

2.  Stipulated: It is unpresidential, undignified, and juvenile for President Trump to retweet a  meme like this:

I am not at all certain that it is so far out of line with the equally uncivil and hyperbolic attacks Democrats have been hurling at him, however., and the meme holds more truth than most of those. Democratic leaders have in fact been defending Iran, their dead terrorist general and their downing of a civilian aircraft while being noticeably silent about the Iranian’s people’s demonstrations against the oppressive regime. Is Trump’s meme worse because a picture is worth a thousand words, or is it worse because his opponents should be  accorded wider leeway in demonizing  a President than vice-versa?

I pick the latter, but the President obviously disagrees. 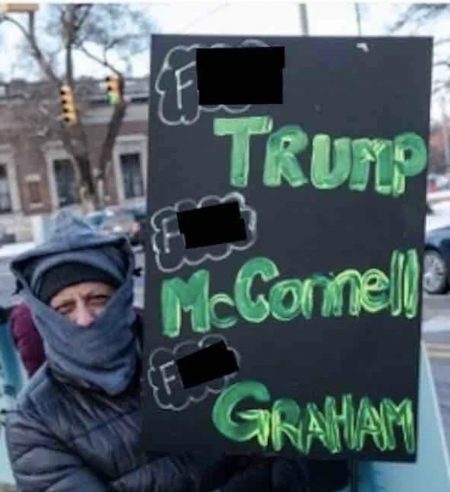 Why, it’s the Chief Equity and Inclusion Officer of  Kellogg Community College in Michigan, Jorge Zeballos! He proudly posted this to Facebook, too. Eventually he decided that this was not a good look for an officer whose duties include advancing such goals as “creating an inclusive environment where we foster respect for others and our differences, support cultural understanding, demonstrate ethical behavior and champion social justice.” Too late.

In his posted apology, Jorge wrote, “Recently I posted a picture on my page of me holding a sign at a rally to protest Trump’s visit to Battle Creek. While I stand by my first amendment right to express myself, I understand that my public and private actions have repercussions on the institution I work for, Kellogg Community College. Because of this, I deeply regret posting the picture on my Facebook page and the controversy it has generated.”

This fool has no First Amendment right to publicly model exactly the conduct that he is charged with discouraging on campus. Now students know his office is a sham, and that he is an untrustworthy hypocrite. The institution covered for Zaballos, but it does not take much imagination to conceive of other “personal opinions” that he could have expressed that would not have been so eagerly rationalized. The school wrote in part:

…The KCC employee in question was expressing his personal opinion on his own time, and not acting on behalf of the College.KCC is a politically neutral, tax-funded institution of higher learning, and does not side with any political party or campaign message. However, this matter is a teachable moment and healthy reminder for all KCC employees that our actions as individuals can have an impact on the institution….As a marketplace of ideas, we remain committed to freedom of speech and freedom of expression as guaranteed by the U.S. Constitution. We also remain committed to creating an inclusive environment where we celebrate commonalities and foster respect for others and our differences….

Well, if an employee’s conduct and statements have a negative impact on his employer, and this clearly does, the First Amendment isn’t the issue, is it? And an institution that is ” committed to creating an inclusive environment where we celebrate commonalities and foster respect for others and our differences’ can’t have a chief equity and inclusion officer who holds signs in public saying “FUCK TRUMP.”

4. Michelle Carter, the rest of the story...I’m surprised:  Yesterday the U.S. Supreme Court declined  to hear the appeal of Michelle Carter, the Massachusetts woman convicted of manslaughter in connection with her boyfriend’s 2014 suicide. I wrote about this case here, and concluded (Boy, that was a great post; you should read it),

The ACLU has opposed the Carter prosecution, and I would expect, or at least hope for, a unanimous vote overturning the conviction in the U.S. Supreme Court. The slippery slope is an abused argument in general, but here attention must be paid to it. Carter represents the worst case imaginable (“Hard cases make bad law”), but  her conviction not only points to escalating speech restrictions but also to “duty to rescue” laws and wide-ranging prosecutions for being an accessory to a self-murder. How many slips down that slope the Carter case polishes, for example, does it take to decide to prosecute the kid I wrote about here, who learned that his friend was going to help a girl kill herself and did nothing in response?

That just goes to show what I know: SCOTUS didn’t just refuse to overturn the case, it wouldn’t even consider it.

A Massachusetts  court held that Carter engaged in a “systematic campaign of coercion” that culminated in Conrad Roy’s suicide. Carter’s lawyers have argued that the contested speech is protected by the First Amendment. The justices did not give their reasons for denying Carter’s appeal or disclose a vote count, as is typical when they reject a case.