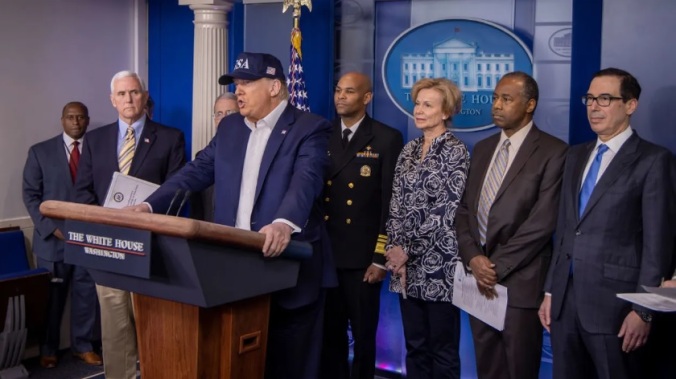 President  Trump addressed the nation once again  this morning on the latest developments with the Wuhan virus pandemic. At the White House briefing,   the President brought the public up to date on additional measures the federal government is taking to minimize the illness’s spread. He also said that he had taken a COVID-19 test himself after being near to at least one individual who tested positive for the illness. Ann Althouse, who tries mightily to be fair to Trump, opined that the conference was “quite good…in content and tone.” I saw the video, and agree: it was certainly the best of his briefings on the virus so far.

But you see, Los Angeles Time White House reporter  Chris Megerian couldn’t report that the President was clear, and that matters seemed as well in hand as possible. Like—what’s your guess, 90%? 95%?  99%?— of journalists in the mainstream media, Megarian entered the room presuming that the President would fall short, and was determined to find something in his words or demeanor that his readers would view in a negative light, with his professional assistance, of course. So what did he find? 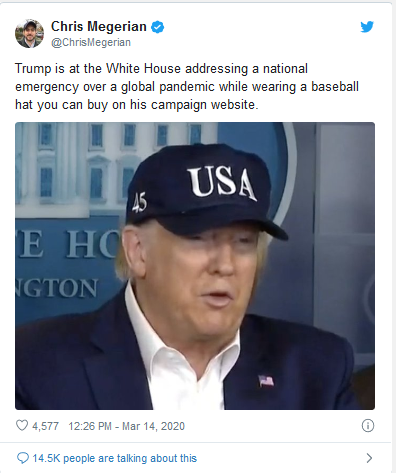 Unbelievable! The President of the United States was so tasteless and gross as to wear a cap that says “USA” on it! Naturally, this is more proof that his entire Presidency is one big branding exercise. (See Big Lie #8 “Trump Only Cares About Himself, Not The Country”) Confronted on the  tweet, Megerian defended himself by saying, “I’m not the one who put a campaign hat on the President’s head.”

The Blaze story on this illustrative episode says that conservative commentators “immediately began panning the L.A. Times reporter for his petty observation.” Why just conservative commentators? Why doesn’t this embarrass liberal commentators? What’s the matter with them? What the hell is the matter with them? How can the President of the United States get fair coverage from someone like Megarian? How can people like this look themselves in the mirror—and the entire mainstream news media is dominated by people like this. 75% of my Facebook friends are people like this, meaning that they have lost all sense of integrity, honesty and fairness in after three years of oppressive hate and fury.

19 thoughts on ““This Is Chris. Like So Many Journalists, He Suffers From Crippling Trump Derangement Syndrome, And Researchers Are Desperately Searching For The Cure. Won’t You Help?””