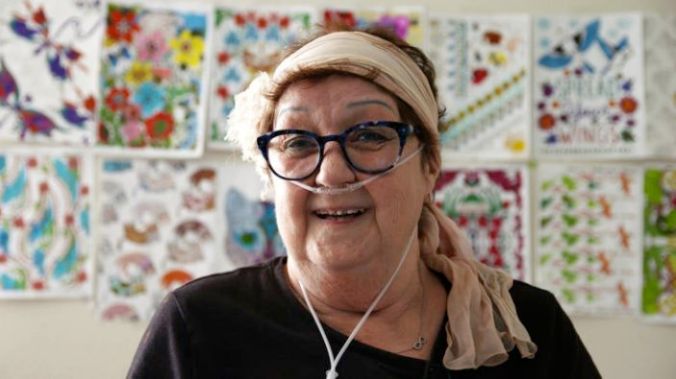 In the final 20 minutes of the documentary “AKA Jane Roe,” “Roe,” whose real name was Norma McCorvey, reveals that when she converted to an anti-abortion, born-again ex-gay Christian with the help of leaders of the evangelical Christian right, she was scamming them, us, everybody. Before that stunning reversal, she had been at the center the landmark Roe v. Wade decision, in which the U.S. Supreme court declared that the right to have an abortion was protected by the U.S. Constitution.

“This is my deathbed confession,” she says in the film, sitting in a chair, on oxygen, in her nursing home room , quite evidently pleased with herself. She is asked , “Did [the evangelicals] use you as a trophy?” “Of course,” she replies. “I was the Big Fish.”

“Do you think you would say that you used them?” “Well,” says McCorvey, “I think it was a mutual thing. I took their money and they took me out in front of the cameras and told me what to say. That’s what I’d say.” She even gives an example of her scripted anti-abortion lines. “I’m a good actress,” she points out. “Of course, I’m not acting now.”

McCorvey isn’t the first litigant in ground-breaking jurisprudence to change her mind. William J. Murray, the atheist son of activist Madeline Murray O’Hair, who used his complaint about being forced to pray in school to launch the litigation that eventually  got all school prayer in public schools banned as unconstitutional, later became an ardent Christian. This always leads opponents of the decision to respond with “See? SEE?”

In this case, the pro-abortion media is calling attention to McCorvey’s admission because they think it somehow weakens the anti-abortion argument. It’s a reverse “See? SEE?”: “They said ‘See? SEE?’ when they thought the “Roe” in Roe v. Wade regretted her abortion, but See? SEE? She didn’t really regret it at all! She was just lying to take their money.”

These are cognitive dissonance scale games, and really stupid ones. See the scale?

It doesn’t matter where “Jane Roe” is placed on the scale. It changes nothing. If the woman was a saint (with a high plus score), it wouldn’t make abortions more ethical, and if she was a fick—which apparently she was—putting her deep in negative territory, it wouldn’t make abortion rights any less valid. Such decisions aren’t about the individuals involved, bu the rights they are asserting.

The people who spark landmark rights decisions are often less than admirable. Ernesto Miranda, whose conviction for rape was reversed in the famous 1963 case of Miranda v. Arizona, leading to the famous “Miranda warning” requirement, was a lifetime criminal who was eventually killed in a knife fight at 35. That’s the whole point of civil rights: everyone has them, and equally, no matter what their beneficiaries may be like personally. It doesn’t make the accused’s right to have an attorney and be informed of his rights any less important because Miranda was a dangerous thug.

The documentary-makers show the video of McCorvey’s confession to her friends and acquaintances on the pro-abortion and anti-abortion sides. Pro-choice activist Charlotte Taft, on the verge of tears, says, “That just really hurts because it’s big stakes. It’s just really big stakes.” Huh? So the woman was a grifter. There are no stakes, unless you count the  $456,911 in “benevolent gifts” McCorvey scammed out of  the anti-abortion movement. Her perfidy has no significance in the abortion debate.

Neither does what Daily Beast writer Cassie da Costa calls McCorvey’s “serious wisdom”:  “If a young woman wants to have an abortion—fine. That’s no skin off my ass. You know, that’s why they call it ‘choice.’ It’s your choice.” Thanks, but I think I’ll take my ethical instruction from someone a bit more credible.

A final note: The Daily Beast, since it cares so deeply about abortion rights, should consider employing writers who understand the law. De Costa writes, “Her willingness to lend her experience to the legal case for abortion led to the passing of Roe v. Wade in 1973, which legalized abortions in all 50 states.” No, you ignoramus, Roe v. Wade wasn’t passed. It’s not a law, its a Supreme Court case.

12 thoughts on “OK, “Jane Doe” Was A Lying, Venal, Fick. It Doesn’t Make Abortion Any More Or Less Ethical”