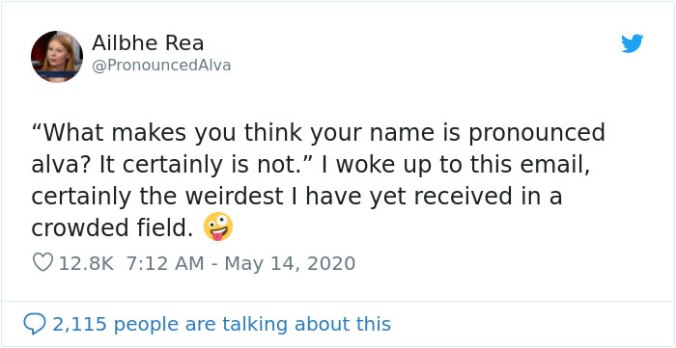 I have a dog in this hunt, in a way. I began my school career being lectured by the Catholic teachers of Arlington, Massachusetts that I was mistaken about my name being “Jack.” No, I was told, that’s just what your parents call you, dear. Your name is JOHN. There is no such name as “Jack.” Being ornery pretty much out of the womb, I refused to answer to “John” in class leading to several contentious meetings between my father (who was also named “Jack,” not “John”) and successive grade teachers. He always brought my birth certificate and a stern lecture about not making unwarranted presumptions that were none of their damn business, and I had to endure several weeks of dirty looks until my natural charm won over my teachers’ disdain.

As in the case of my teachers, the idiot who wrote Ms. Rea was both presumptuous and wrong. She had written, 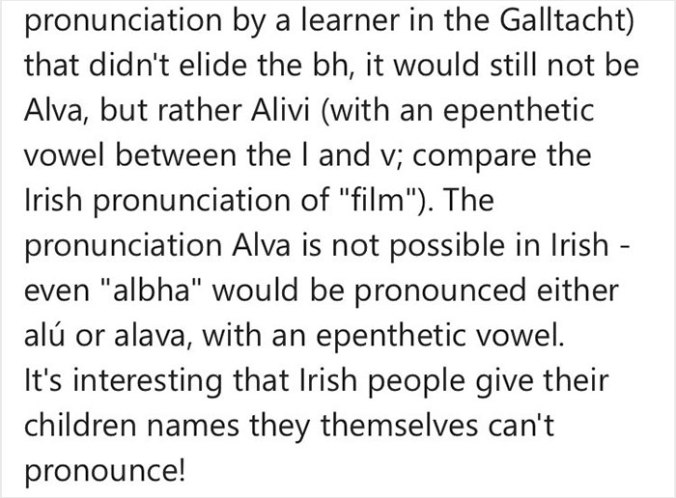 Why thank you! Now shut the hell up!

Several Irish-speakers responded that they has learned that “Alva” was at least a common pronunciation  of “Ailbhe.” One tweeted, 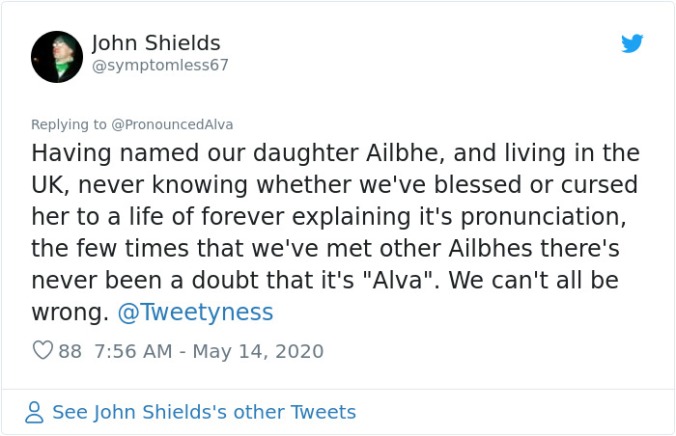 In fact, it’s impossible for Ailbhe to be “wrong.” One cannot be wrong regarding the spelling or pronunciation of one’s own name. It is what its owner says it is. There are few things in life over which one has absolute, unchallenged dominion, but one’s own name is undoubtedly one of them. The height of pedantry and arrogance is to presume that you know better than the individual who calls himself or herself something what their “right” name is. I remember the New England Patriots once had a quarterback named Mike Taliaferro. He pronounced it “Tolliver.” Now, there is no way you can get “Tolliver” from “Taliaferro” using the standard rules of English or, for that matter, Italian. But nobody, even in that hotbed of pedantry that I called home for so long, dared to tell him that he didn’t know how to pronounce his own name. “Tolliver” he remained.

Of course, inexplicable name pronunciations are a thing in Massachusetts. Woburn is “Wooburn,” for some reason. Winchester is Winchester and Dorchester is Dorchester, but Worchester is “Wuster,” and Gloucester is “Gloster.” Quincy, Mass. is pronounced “Quinzy,” even though nobody calls the 6th President, a Massachusetts native, John Quinzy Adams. Just try going into one of those town and confronting a resident with, “Are you aware, you unschooled boob, that you are pronouncing the name of your community incorrectly?”

Challenging someone’s choice of how to pronounce his or her own name is an order of magnitude worse.

This is as good a time as any to recall a favorite passage from Louis Carroll’s  “Alice books on this topic, as Alice encounters the White Knight:

‘You are sad,’ the Knight said in an anxious tone: ‘let me sing you a song to comfort you.’

‘Is it very long?’ Alice asked, for she had heard a good deal of poetry that day.

‘It’s long,’ said the Knight, ‘but it’s very, very beautiful. Everybody that hears me sing it — either it brings the tears into their eyes, or else –‘

‘Or else what?’ said Alice, for the Knight had made a sudden pause.

‘Or else it doesn’t, you know. The name of the song is called “Haddocks’ Eyes“.’

‘Oh, that’s the name of the song, is it?’ Alice said, trying to feel interested.

‘No, you don’t understand,’ the Knight said, looking a little vexed. ‘That’s what the name is called. The name really is “The Aged Aged Man”.’

‘Then I ought to have said “That’s what the song is called”?’ Alice corrected herself.

‘No, you oughtn’t: that’s quite another thing! The song is called “Ways and Means“: but that’s only what it’s called, you know!’

‘Well, what is the song, then?’ said Alice, who was by this time completely bewildered.

‘I was coming to that,’ the Knight said. ‘The song really is “A-sitting On a Gate”: and the tune’s my own invention.’

You are who you decide you are. and what you choose to call the name you use to describe who you are is your choice, not to be challenged.