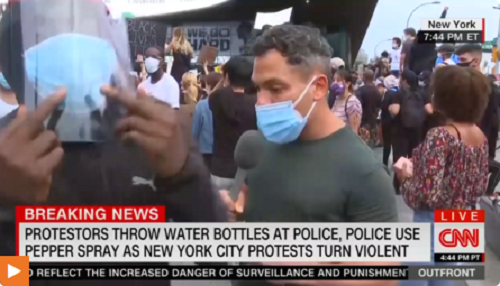 I made the mistake of perusing collections of the mainstream media’s fueling of the George Floyd Ethics Train Wreck, and now I have to write about them. Actually, just quoting them is enough, because they speak for themselves.

1. Just to stoke the truly unhinged, CNN featured Lt. Gen. Russel Honore (Ret.), who apparently escaped from the cutting room floor of “Dr. Strangelove.” His enlightenment: President Trump might drop nuclear weapons on U.S. cities to stop the riots, saying, “Our troops need to stand steady. The Congress and the Senate need to understand, this man has control of over 3,000 nuclear weapons…”  The only responsible response to such a statement would be, “What? How did you get loose? You’re a lunatic! Get off the line!”

But this was CNN, and Anderson Cooper was in charge, so CNN just allowed this nonsense to be broadcast without objection or contradiction.

2. Guess what network featured this rant!

“I would like to tell people, man, if you gonna point a finger at the looters, the protesters, rioters, whatever you wanna call them, before you point finger at them, point every single other finger you got back at America. This is what happens when a country promises liberty and justice for all, but only gives you liberty and justice for white folks. This is what happens when one of the wealthiest countries in the world doesn’t understand the plight of the poor and the have-nots. You got 40 million people out of work, unemployment the highest it’s been since the depression era, people cooped up in the house the last few months waitin’ on stimulus checks. Yet during this whole process we continue to watch the rich get richer in this country.

“And not to mention, ain’t no good gonna come to America until they do right by black folks. Period. You can’t continue to brutalize and kill descendants of God’s children that built this country. Understand what that does to us? You know, mentally and emotionally? All this country needed was a reason. America has given black people 400-plus years of reasons to go crazy. I’m actually shocked that we didn’t snap a long time ago.

“This country continues to deny us equality, justice and just plain decency. You know … what you have in this country right now is a perfect storm of people who are ready to burn this society of white supremacy to the ground and America earned every bit of this. …”

Radio host Lenard Larry McKelvey, aka “Charlamagne tha God,” of whom I was blissfully unaware until Joe Biden went on his program to announce that blacks could magically change their race by deciding not to vote for him,  was a featured guest on the “First Take,” program. That’s where ESPN stuffs its Leftists and race-baiters so they’ll do minimal damage during actual sports reporting. To be fair, there is no sports reporting, so I guess these Disney corporation outbursts of anti-white racism are, if not excusable, predictable.

3. CNN’s infantile Don Lemon continues to spew self-contradictory, hysterical gibberish, this time suggesting that by announcing that he will not tolerate rioters terrorizing our communities,  the President is declaring “war on America.”There’s really nothing further negative I can say about this epic blot on our culture, other than to  quote him:

Again, I’m not condoning violence at all, and I hope that they remain peaceful, but I hope that they stand up and fight for their rights to peacefully protest in this country, but he’s playing a very dangerous game, because this will backfire. People are upset and they’re angry. These people as I’ve been saying as well, they feel like they are occupied in their own communities by police departments. Many of them militarized police departments. Now the entire country, according to his orders, we are living under a militarized country or we will be soon and it will play out in front of our very eyes on national television.

The man is paid to go on national TV to talk like this. “Remain peaceful”! Somebody please show Don the video. “Fight for their rights to peacefully protest’! Yeah, people should riot and loot to protest their right to peacefully protest. How far gone does someone have to be not to roll one’s eyes and giggle at statements like these?

4.On CBS, Oprah Winfrey’s galpal Gayle King hosted  a one-way assault on America and white citizens, cherry picking the worst examples of false accusations against blacks as representative of the culture. No balancing here: she featured one advocate of anti-white bigotry after another:

Point of order: Nobody accused George Floyd falsely, as far as we can tell. He was arrested for breaking the law. Mike Brown was not falsely accused. The vast majority of blacks involved in police-involved shootings, like the majority of whites in such events, in fact had engaged in criminal activity. Meanwhile, these same journalists and activists have been arguing that those who accuse men of rape and sexual assault should be be presumed accurate. Wise’s argument is a straw man, and ought to have been identified as such by someone.

Then we heard Ibram X. Kendi, a professor at American University, tell us that since the Jim Crow era, white people have had the right of using the police to their advantage.  “They recognize that they have the privilege to call a police officer with the belief that the police officer, even if they’re in the wrong, will be on their side.,” he said, evoking the Central Park Cooper vs Cooper confrontation, in which the police were not on the side of the white woman, and after which it was the white woman who was vilified across the culture.

King, emotional and pandering as always, wrapped up the segment by saying,

“…I look forward to the day where black people in this country are not first judged as suspects and not law-abiding citizens first. I worry now when my son goes to walk his dog in L.A., in the climate that we’re living in. I get very worried just when he steps outside doing ordinary things to walk the dog. And he said to me that somebody said to him, be tired, be exhausted, but never be diminished. So I try to hold on to that. But these are very scary times, very frightening times we’re living in. I thank you for that story, it’s very important to show the history. Thank you very much.”

5. Finally, as a grand finale, here is CNN’s monument to conflicts of interest, privileged advancement in defiance of ability, and family connections, Chris Cuomo, displaying his quality of improvised thought. If you find this enlightening or perceptive, heaven help you:

Who is speaking to this country and telling them, telling these people that you’re seeing on your screen that there is an answer to this? That there is something other than outrage and the language of pain to process in this situation? Our best answer can’t be police marching down a street in a major city chasing back citizens of this country. We have to be able to do better. You shouldn’t have to rely on a CNN correspondent to speak to the truth and pain of what is hitting an entire part of this coy. It’s not [Sara Sidner’s] job. It’s not my job. It’s not the job of these police, to make this stop. Where are our leaders? If you want to say, well, these people need to go home, that’s what stops it, personal responsibility, we would have never been having this conversation if you didn’t have people take to the streets. If there were another way for this to have been done, we wouldn’t be here. We wouldn’t keep coming back to this place.

You’re watching this all over the country whether it’s the nation’s capital or New York or Atlanta or San Francisco or Long Beach and of course all emanating out of Minnesota, remember people will not like what they see. That is almost always the case when people take to the streets to fight against a system that they believe is doing things that are not American. It’s hard to please that same system. I mean, think about it. We don’t like that they’re not listening to the law and not following the curfew. Well, their issue is that following the curfew, following the rules, does not work both ways in their communities. Or there are people who believe that that is true about minority communities. Yes, they’re members of the majority, but they believe that America should treat everybody the same way. So, you’re not going to have a protest of the system that the system likes….But the appetite, the hunger for people to understand that somebody gets it and sees it for what it is and says that it’s wrong is that strong.

21 thoughts on ““The Horror. The Horror.” How U.S. Journalism Descended To These Unethical Depths Is A Mystery, But It’s There.”