1. On Fame. One of my pet peeves is the pursuit of fame as a life objective. It is inherently unethical, because fame itself is unrelated to good or evil; it is a neutral value, and its pursuit is pure self-interest mixed with ignorance.

First, as too many celebrities to count have informed us, fame is at least as much of a burden as a boon, and second, there is no such thing as “immortality” through fame. As Shelley wrote,

I met a traveller from an antique land,
Who said—“Two vast and trunkless legs of stone
Stand in the desert. . . . Near them, on the sand,
Half sunk a shattered visage lies, whose frown,
And wrinkled lip, and sneer of cold command,
Tell that its sculptor well those passions read
Which yet survive, stamped on these lifeless things,
The hand that mocked them, and the heart that fed;
And on the pedestal, these words appear:
My name is Ozymandias, King of Kings;
Look on my Works, ye Mighty, and despair!
Nothing beside remains. Round the decay
Of that colossal Wreck, boundless and bare
The lone and level sands stretch far away.”

The lyrics of the theme song from the movie and TV series “Fame” so annoyed me that I refused to view either:

I feel it comin’ together
People will see me and cry, fame
I’m gonna make it to heaven
Light up the sky like a flame, fame
I’m gonna live forever
Baby, remember my name!

Yeah, good luck with that life plan. Who remembers Irene Cara, the star of the film who sang the song? If you enter the field of performing, or any field, to become famous rather than to contribute something of value to society, you’re an asshole.

Chasing it is a fool’s pursuit, but sometimes fame finds you. I just read that former MLB baseball player Claudell Washington died. I remember him, but few do: he arrived heralded as a future superstar, but never reached that status. He is famous, however, because a foul ball he hit in a game of no importance is “immortalized” in “Ferris Bueller’s Day Off,” a cult classic, as the ball Ferris (Matthew Broderick) catches in the stands while playing hookie.

It’s more immortality than most of us get.

2. Fame and the  military bases. In yet another show of grandstanding during the George Floyd Freakout, the Republican-led Senate Armed Services Committee followed the lead of Elizabeth Warren  by passing a bill requiring the Pentagon to rename military bases and other “assets and properties” currently honoring Confederate generals and officers. Fine. My unyielding objection to statue-toppling and censoring history does not extend to this.

Once upon a time the Civil War was regarded as a deadly family quarrel in which all participants were men of good will, but all still Americans. One side was just tragically wrong. The developing view that the soldiers who fought against the Union were enemies of the United States is defensible, if simplistic. If there is any setting where the argument that combatants on the side of the Confederacy should not be honored has validity, it is in connection with the U.S. military.

“It has been suggested that we should rename as many as 10 of our Legendary Military Bases, such as Fort Bragg in North Carolina, Fort Hood in Texas, Fort Benning in Georgia, etc. These Monumental and very Powerful Bases have become part of a Great American Heritage, and a history of Winning, Victory, and Freedom. The United States of America trained and deployed our HEROES on these Hallowed Grounds, and won two World Wars. Therefore, my Administration will not even consider the renaming of these Magnificent and Fabled Military Installations.”

This is typical Trump logic, which is to say, it makes no sense. If we had lost the wars where those soldier were trained, would that mean we should change the names of the posts?

On the other hand, as Ethics Alarms commenter Chris Marschner points out, it is odd that Democrats are not demanding that long time Democratic Senator and party leader Robert Byrd’s name be removed from the more than 50 structures, including Federal buildings, named after him. Byrd didn’t just join the Klu Klux Klan, as Southern politicians of his era almost had to do (like Supreme Court Justice Hugo Black, one of the greatest liberal justices in SCOTUS history.) He organized a chapter of the KKK, and eventually served as its Grand Cyclops.

3. Not the way to be famous…A simple ethics rule: If your parent is a public official, don’t get arrested, and don’t get a mug shot taken that looks like this: 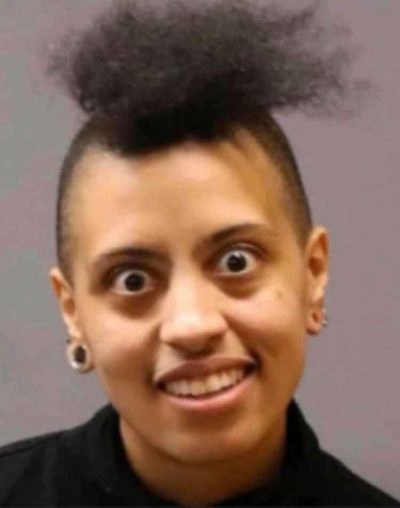 I noticed that that photo of Bill De Blasio’s daughter Chiara, which I used in an earlier post,  was getting an unusual number of views. I wonder why? I know the children of elected officials have it tough, as Sarah Palin’s children have vividly illustrated. But once one is over the age of, say,15, it shouldn’t be that hard to comprehend that you have an obligation not to be an embarrassment to your public figure father or mother.

4. Impediments to fame. Freedom of speech, opinion and expression? What freedom of speech, opinion and expression? Syracuse University student Adrianna San Marco was removed as a columnist from the school’s largest paper, The Daily Orange, because she wrote an opinion  column, published at LifeZette , that was “particularly harmful to our Black community members” and included “racist undertones,”  a characterization De Marco denies. Titled “Why institutional racism is a myth,” San Marco cited a study published in scientific journal PNAS (Proceedings of the National Academy of Sciences of the United States of America) that found “no overall evidence of anti-Black or anti-Hispanic disparities in fatal shootings.” In fact, those findings are indisputable; it’s just that activists choose to ignore them, and to tar anyone trying to contextualize the facts as racist.

“College campuses are havens of liberal ideology and any opinion that diverges from the progressive left is attacked viciously,” San Marco said in a statement.

5. Being famous sometimes isn’t enough. This is what George Will calls “condign justice.” As discussed here, singing group Lady Antebellum decided to make its mandatory nod to the George Floyd Freakout by removing “Antebellum” from its name, and henceforth going by “Lady A.” Oops! The God Of Stupid was watching, and now the group has a big problem. As reported in Rolling Stone, the name “Lady A” is taken. A 61-year-old black woman whose real name is Anita White  has been singing the blues under that name for more than 20 years. (Her “A” stands for Anita.) She’s released multiple albums with the name, and on top of her day job working with Seattle Public Utilities, she’s relasing another album, “Lady A: Live in New Orleans,” on her birthday, July 18th.

“This is my life,” she says, referring to the announcement from Lady Antebellum. “They’re using the name because of a Black Lives Matter incident that, for them, is just a moment in time.” A moment in time meaning “an opportunity to get cheap publicity.” It will be interesting to see if the real Lady A will agree to sell her rights to the name at a premium, which I’m sure she can, or refuses to be bought.