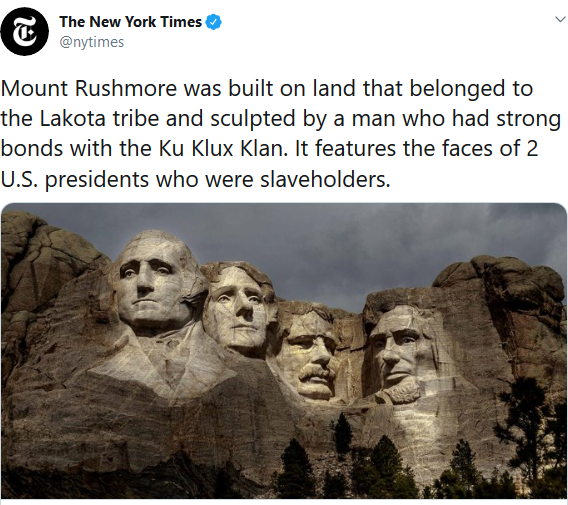 This isn’t news, it isn’t history, it isn’t fair, and it is anti-American. Does anyone objective need more evidence that the New York Times has abandoned any sense of its role in informing the public? This is pure, indefensible race-baiting and Black Lives Matter propaganda.

1. Native American Tribes “owned” almost all of the territory everything in the U.S. was built on, including the New York Times building. They don’t any more.

2. The Mount Rushmore sculpture is art, and the political and social views of the artist, Gutzon Borglum, is a matter of record. The George Floyd mobs want to justify erasing as much American art and culture as possible by any means necessary. If the artwork itself won’t justify the destruction (as with the Emancipation Memorial, the second version of which was just marked for removal in Boston), then the subject will ( Columbus); if the subjects are defensible, than the artist must have something in his history to support the erasure of his work. It’s a disingenuous bootstrapping exercise, for the objective is really to destroy the symbols of our republic and re-write the history of the United States. An artist’s work and the artist are separate and distinct. In the case of Mount Rushmore, the work has taken on far more importance and symbolism, all positive, inspiring and uplifting. An American who cannot find pride in Mount Rushmore is an ignorant American, one whose understanding of his or her own nation has been poisoned, or one with a sinister agenda.

3. George Washington and Thomas Jefferson are not honored on the mountain face as “slaveholders” any more than Teddy Roosevelt is there because he was a big game hunter, or Abe Lincoln is honored for suspending the writ of habeas corpus. Washington is there because without his courage and measured leadership, there would be no United States of America. Jefferson is among the four because he brilliantly articulated the nation’s ideals, aspiration and mission, giving the Continental Congress the reasons they needed to take the dangerous leap toward independence from England.

4. The Times tweet is an insult to the nation and its heroes, and a deliberate effort to misinform its citizens. This paper has deteriorated into an enemy of all of us, 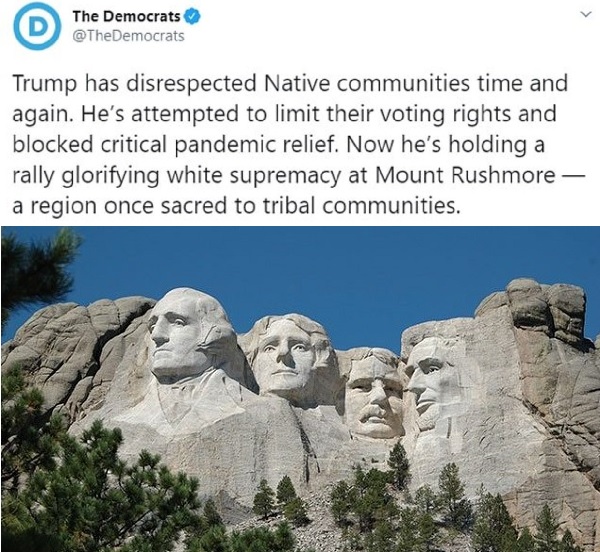 So we may conclude from this tweet that the Democratic Party has wholly endorsed the extreme anti-America position that the entire nation and its history is rooted in racism and white-supremacy, and the 4th of July, the celebration of our nation’s founding, is a vile tradition celebrating white supremacy.

The inconvenient truth is that this nation was founded by Europeans and their ancestors, and that most of its accomplishment, achievements, innovations and victories were also the result of Europeans. It has been a white dominated culture and history, so  celebrating the nation’s history necessarily focuses disproportionately on the lives and contributions of white men. The current anti-white racist narrative that any event or achievement that did not involve African-Americans was by definition motivated by white supremacy is a clever but dishonest trap.

Let us be clear. The Democratic Party now opposes the concept, history and symbols of the United States of America.

“If you support America’s founding and our heroes throughout our history you’re now ‘glorifying white supremacy’? This is insane, historically illiterate nonsense. When will Joe Biden condemn his own party’s hatred of America?” wrote GOP spokeswoman Elizabeth Harrington.

Oh, he won’t. Nonetheless, this his party, and he is accountable.

To give the Democrats credit, they had the sense, if not the integrity, to take down their self-indicting tweet. The Times, apparently, wants us to know where it stands.

16 thoughts on “Unethical Tweet Of The Month: The New York Times…And A Close Runner-Up, Both Libeling America”