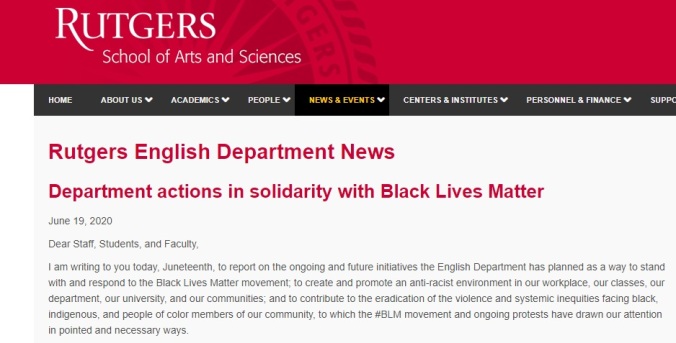 Yesterday, I wrote about  Rebecca Walkowitz, the English Department chair at Rutgers University, sending  an email to the Rutgers community titled “Department actions in solidarity with Black Lives Matter.” In order to “contribute to the eradication of systemic inequities facing black, indigenous, and people of color,” she announced, the English Department will begin “incorporating ‘critical grammar’ into our pedagogy.” “Critical grammar” pedagogy “challenges the familiar dogma that writing instruction should limit emphasis on grammar/sentence-level issues so as to not put students from multilingual, non-standard ‘academic’ English backgrounds at a disadvantage,” her email states. “Instead, it encourages students to develop a critical awareness of the variety of choices available to them w/ regard to micro-level issues in order to empower them and equip them to push against biases based on ‘written’ accents.”

This, I concluded, was one more example of the solution to “systemic racism” being rammed down our metaphorical throats by the World’s Woke consisting of removing any standards that any segment of black America found the lest bit inconvenient or challenging—you know, like competing for jobs, SAT scores and having to obey lawful directives from police officers. I wasn’t the only one, though the report on this initiative came from the College Fix, a conservative site that reports on the leftist nonsense in our institutions of higher learning. There has been literally nothing about this episode in the mainstream news media. The New York Post—but that’s a Murdoch publication, so thus presumptively eeeevil—did have a brief editorial note about the matter:

“….Rebecca Walkowitz, vowed to incorporate “ ‘critical grammar’ into our pedagogy,” which will challenge “the familiar dogma that writing instruction should limit emphasis on grammar/sentence-level issues,” so as not to put students with poor “academic” English backgrounds “at a disadvantage.” Another goal: “decolonizing the Writing Center.” How does lowering standards serve justice? Executive dean Peter March and spokeswoman Dory Devlin didn’t respond to request[s] for comment.”

Two esteemed Ethics Alarms readers, however, argued that I, as well as the College Fix and others, got her intent backwards. Heeere’s commenter Here’s Johnny (emphasis mine):

[I]n saying “Critical grammar pedagogy challenges the familiar dogma”, they are doing the right thing. The familiar dogma being challenged is that proper grammar is not important. That dogma came into play to cut some slack to students whose grammar was not perfect, for cultural, or native language, or other reasons. In challenging that dogma, Rutgers is saying that the phrasing of a message must be looked at critically. It may be that slang, or cultural ways of speaking are appropriate, or it may be that standard grammar is necessary. Students must know the difference and use what is right for the message and the audience.

Now I’m completely flummoxed. That would be beneficial to black students, but it is definitely not the kind of change I am seeing being advocated in academia and elsewhere “in solidarity with Blcal Lives Matter”, where demands that black students be graded more leniently than white students, for example, are being received as legitimate remedies. This is Bizarro World territory. In a sane and logical environment, Here’s Johnny’s interpretation would be a salutary measure that would benefit blacks, but not by the prevailing logic of the George Floyd Freakout. Was I, like the College Fix and others, being led by confirmation bias, and interpreting a benign and reasonable Rutgers policy as the opposite of what it was because of a bias against progressive academia?

Over at Medium, Hank Kalet (“Poet, professor & longtime newsman, who covers economic & other issues for NJ Spotlight and other publications.”) argues that Rutgers is getting a bad rap from conservatives:

The College Fix piece presents the plan as part of a process of a “decolonization,” using language common on Fox News and conservative websites, and describing it as “an effort to deemphasize traditional grammar rules.” On Fox, one former professor claimed that the changes, in particular efforts to de emphasize grammar, would hurt minority students, following through on a narrative pushed by the conservative spin machine.

The problem is that this narrative is false. It’s based on a distortion and has little to do with what the Rutgers English Department is doing, which is building on a longstanding effort to include more texts from marginalized groups, providing workshops on anti-racist teaching practices, and supporting black and brown faculty and students through mentorships and other arrangements.

The grammar distortion, unfortunately, is the one that is doing the most damage. It stems from a single paragraph — one part of a three-part initiative that will be undertaken by the graduate program. Parts one and two discuss proving workshops and focusing on graduate student life, while the third, the offending one, talks about “Incorporating ‘critical grammar’ into our pedagogy.”

“This approach challenges the familiar dogma that writing instruction should limit emphasis on grammar/sentence-level issues so as to not put students from multilingual, non-standard “academic” English backgrounds at a disadvantage. Instead, it encourages students to develop a critical awareness of the variety of choices available to them w/ regard to micro-level issues in order to empower them and equip them to push against biases based on “written” accents.”

This passage should be clear to anyone who takes the time to read what is written. The “familiar dogma” here is the problem. It assumes that students from multilingual backgrounds will be harmed by a focus on grammar at the expense of broader writing issues. This dogma can leave students without the strong, sentence-level foundation they need to write well. What Rutgers is proposing — and what the letter clearly says — is a shift; it is not proposing to de-emphasize grammar, but to encourage “critical awareness,” or an understanding of the history and development of English grammar, how it works, and the potential impacts of the choices made in the writing process. Rather than lowering the bar, as the critics claim, the department is raising it.

I reached out to the chair of the department, Rebecca Walkowitz, who told me via email that

“the effort will result in “more attention to grammar in the aggregate, not less. Our standards remain rigorous and high, and our goal is to help students succeed in academic writing and other writing genres.”

I will be thrilled to discover that my interpretation of the letter, and that of others, was wrong, and that Rutgers will address “systemic racism” by teaching black students that if they continue to use “Ebonics” in business and networking, they will be responsible for their own failures that follow. But is that really what’s going on?

Hank Kalet ends his piece with this slap at “conservative media”:

What this episode demonstrates is how utterly bankrupt conservative media is and how inept we have become as news readers in judging the content we see online. The College Fix story was poorly sourced: It was based on a single link and included a nod to reaching out to Rutgers, though it is unclear how serious that effort was. It distorted the language in the letter itself, which then influenced many readers to engage in the same kind of misreading. And, finally, it went viral because it confirmed the biases of a specific cohort of readers — not just conservatives, but liberals and moderates who have made it their mission to knock the “woke left.”

Well, that makes me suspicious of Hank. The College Fix story wasn’t “poorly sourced.” Its conclusions were based on the exact section Kalet quoted and absurdly said was “clear.” College Fix has a good record of requesting comments and clarification from the individuals in their stories: Hank’s doubts on that score are unfair. The letter itself was distorted…filled with jargon and ambiguities with meanings that still aren’t sufficiently apparent. What, for example, is “critical grammar’?

Ethics Alarms will gladly post a retraction of my original post, once  I see real evidence that Rutgers is planning to emphasize correct grammar in order to help black students succeed in a systemically racist world, which would indeed make sense, except in the cracked logic of George Floyd Freakout World, where I assume Rutgers dwells in splendor.